Where Are They Now: 1990s Celebrity Heartthrobs 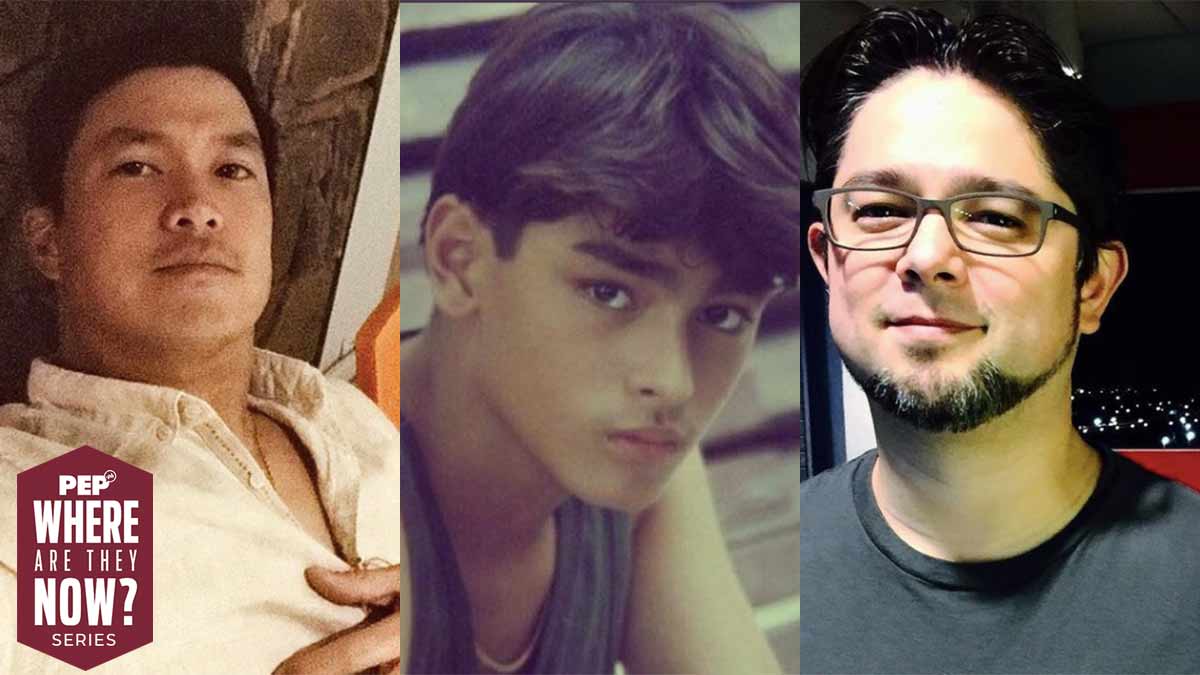 Do you remember having a crush on these '90s heartthrobs?
PHOTO/S: Diether Ocampo / Red Sternberg on Instagram / File Photo (Eric Fructuoso)

It's been a little over 30 years since the emergence of teen groups and youth-oriented shows such as Gimik, TGIS, and Tabing Ilog in the 1990s.

These shows paved the way for many young artists to make a name for themselves,

Some of the most popular leading men in showbiz today were products of these shows and considered crush ng bayan during that time.

Below, PEP.ph (Philippine Entertainment Portal) looks back on the career of some of the 1990s celebrity heartthrobs who stole the viewers’ hearts.

When he is free of showbiz commitments, Bobby and his wife Bienne Co frequently travel with their two children, Miguel and Gabrielle.

Carlo was seven years old when he began appearing in ABS-CBN’s Ang TV.

Fast-forward to 1999, Carlo joined the original cast of Gimik, where he played Jun-Jun. This was also the time when his love team with Angelica Panganiban (who played Jelai in the series) was launched.

He then became known for his Cachupoy hairstyle and boyish looks.

Carlo’s other notable ‘90s appearances were his starring role in 1997’s Kokey and as Young Jubal in Magic Temple.

He remains active in showbiz to this day.

Now 35, he has a beautiful daughter with partner Trina Candaza.

Diether made hearts skip a beat when he became part of Gimik as Gary.

He became a household name and was even part of the popular all-male group The Hunks. He won several Best Drama Actor awards for his outstanding performance in the soap operas Sana’y Wala Nang Wakas (2004) and Ikaw Ang Lahat Sa Akin (2006).

All this time, Diet has been juggling his showbiz career and business ventures.

In 2019, he became a lieutenant commander at the Philippine Coast Guard Auxiliary, and also completed the seafarer's training conducted by the Philippine Center for Advanced Maritime Simulation and Training.

That was also the start of his love team with Antoinette Taus, who starred as Bianca de Jesus.

With his effortless charm and undeniable acting skills, Dingdong instantly became one of GMA’s favorite leading men, bagging role after role in the Kapuso network.

It was on the set of Marimar where he met his wife, fellow actress Marian Rivera. They got married on December 30, 2014, and now have two children, Zia and Ziggy.

The 40-year-old star is also busy with other things aside from showbiz. He is the founding chairman of the YesPinoy Foundation and manages his own film studio, AgostoDos Pictures.

John Lloyd stole the showbiz spotlight when he starred as Rovic in ABS-CBN’s Tabing Ilog in 1999 after his appearances in Palibhasa Lalake and Gimik.

It was his role in Tabing Ilong where John Lloyd proved himself an actor to watch out for.

True enough, JLC is now one of the most sought-after leading men in the country. His films with on-screen partners Bea Alonzo (One More Chance and A Second Chance) and Sarah Geronimo (A Very Special Love and You Changed My Life) earned him the title “Box-Office King.”

He also has numerous projects as a solo actor, such as the critically acclaimed film Honor Thy Father (2015) and Dubai (2005).

In 2017, JLC took a showbiz hiatus, but yet still made headlines as rumors about him and then-girlfriend Ellen Adarna filled the news. Although they eventually separated, the two are co-parenting their son, Elias.

On May 15, 2021, after a four-year hiatus, JLC signed up with Maja Salvador’s talent management agency, Crown Artist Management, which announced his showbiz comeback.

Another Gimik alumnus, Marvin Agustin was the other half of one of the most successful love teams of the ‘90s. The other half was Jolina Magdangal.

Their partnership was launched in Gimik, and they went on to break box office records with their films Flames: The Movie, Labs Kita Okey Ka Lang, and Hey Babe!.

Currently, Marvin is busy with his restaurant business and improving his cooking skills.

The 44-year-old star has twin sons, Sebastian and Santiago, who are turning 16 in August 2021.

His pearly whites and charming dimples were familiar sights in the world of TVCs (remember his commercial for a toothpaste brand?) even before Onemig officially joined showbiz in 1995.

But his biggest break happened when he joined TGIS as the charming JM Rodriguez. He was part of a love triangle with Peachy (Angelu de Leon) and Wacks (Bobby Andrews). He was later paired with Ciara Sotto, who eventually became his real-life girlfriend. Their relationship lasted for eight months.

Onemig left the entertainment industry in 2006. He and his ex-wife, actress and model Valerie Bariou, separated in 2005. Now 44, he lives with their two children.

As he stays busy managing his food franchise and real-estate businesses, he also keeps his body fit and healthy with the help of cycling.

As a child actor, Patrick starred in various films such as Separada (1994), Asero (1995), and Madrasta (1996), where he bagged his first Best Child Actor at the FAMAS Awards. In 1997, Patrick received multiple awards for the movie Batang PX as well.

In 1999, he became part of the original cast of ABS-CBN’s Tabing Ilog. He played the role of Jaime “James” Collantes and was paired with actress Paula Peralejo, who was cast as Angela “Anne” de Guzman.

The 39-year-old actor is happily married to Nikka Garcia and they have three daughters—Nicole Patrice, Michelle Celeste, and Francisca Pia. Their YouTube channel Garcia Family has over 100k subscribers as of writing.

However, Red was active in showbiz for only a short time.

For a time, he had a corporate job here in Manila before deciding to live permamnently in the United States.

Based on his Instagram updates, the 46-year-old former actor is now living a happy, quiet life with his family.

Red recently had guest appearances in TV and online shows in the Philippines, one of which was the August 2020 reunion of TGIS on PEP.ph's online talk show, PEP Live.

The group had their own show Gwapings Live! on GMA-7, and became mainstays of ABS-CBN sitcom Palibhasa Lalake as well. They disbanded in 1994.

Then he became a character actor. His latest series was Kadenang Ginto (2018).

In 2020, Eric's Instagram post where he was seen driving a tricycle went viral. Some vlogs mistakenly claimed the pandemic has turned him into a tricyle driver.

Although Eric clarified it was not his source of livelihood, he retorted, "Huwag niyong ismall-in ang mga tricycle drivers."

Eric has business ventures, such as Gwapigs Porkchop, a restaurant which has 10 branches, and Gwapings Moto, a motorcycle shop in Naic, Cavite.

Before joining the "Gwapings," Jao Mapa was already making a name for himself as a commercial model.

He appeared in various TV shows and movies before taking a break in 2000 to continue his studies. He graduated in 2003 with a degree in Fine Arts, major in Advertising, from the University of Santo Tomas.

Today, he continues to show his love for making art through his paintings, which he regularly posts in his social media accounts. He also recently signed up with VIVA and is expected to have a comeback sitcom this year.

Jao is also married and has three children, Benjamin, Caleb, and Amber Mari.

As the son of action superstar Rudy Fernandez and screen goddess Alma Moreno, Mark Anthony was destined for stardom.

He was the most talked-about Gwapings member.

As a solo star, he had various breakout roles in films Pare Ko (1994), Mangarap Ka (1995), and Matimbang Pa sa Dugo (1995). He was paired with rising star and then-girlfriend Claudine Barretto.

Mark has been on and off showbiz for a while. His most recent project was VIVA Films’ Miracle in Cell No. 7, which was one of the eight official entries to the 2019 Metro Manila Film Festival.

Among the four Gwapings, Jomari was the most visible as a solo star.

He was very active in showbiz from 1991 to 2015, before he took a hiatus and decided to explore a career in politics.

In 2016, he ran for councilor of Parañaque's 1st district and won. He still holds the position to this day.

For a time, he also produced concerts.

He is also a race-car driver.

Aiko was his ex-wife and the mother of his son Andre.

He and ex-partner Joy Reyes have two kids.

In 2019, he rekindled his romance with Priscilla Almeda, his grilfriend during his Gwapings days.