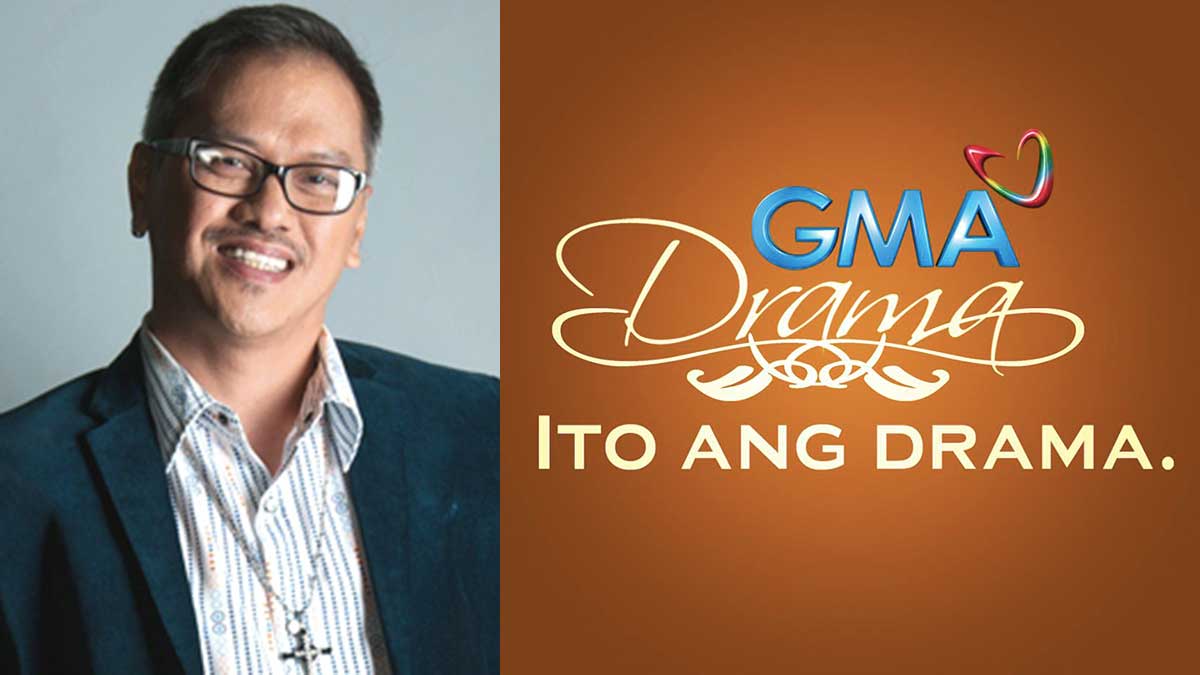 ABS-CBN director Jerry Lopez Sineneng is now with GMA-7 after 26 years of working for the Kapamilya network.

This has just been revealed in a press release issued today, November 24, 2021, by GMA-7 about its directors and creative heads for its drama programs.

In a press statement, Direk Jerry says, “I am most excited with the prospect that I will be working with a group of actors, creative team, staff, and crew, whom I have never worked before.

"I believe that life is a continuous learning process, and I am excited to interact with a different brand of talents."

GMA-7 has yet to formally announce Direk Jerry’s projects, but he is set to helm the upcoming Kapuso drama series Widows' Web.

THE DIRECTORS OF KAPUSO NETWORK

Direk Jerry is the latest addition to the stable of TV directors that GMA-7 has created for its drama programs. 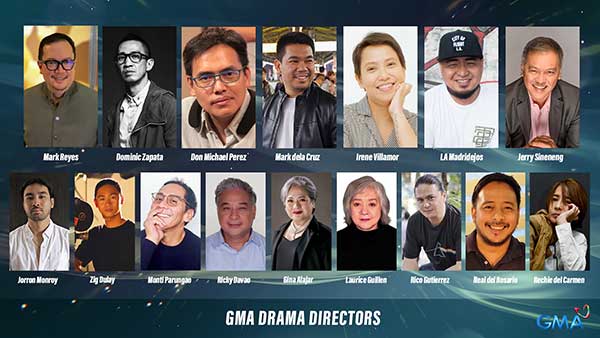 Mark Reyes, Don Michael Perez, and Dominic Zapata have been with GMA-7 for many years.

Direk Mark, whose famous work is Encantadia, also directed Party Pilipinas and a number of movies for GMA Films.

He recalls, “I’ve been directing for more than 25 years. I am very thankful to GMA that they gave me the chance to direct different genres from all forms of dramas, to live shows around the world for GMA Pinoy TV and live Sunday afternoon musicals and films as well.”

Direk Don, who started as a spiels director for ABS-CBN’s Maalaala Mo Kaya, has been with GMA since 2005.

In the Kapuso network, one of his notable projects was as writer and director of the hit fantasy series Mulawin.

He relates, “Since then I have gone on to direct numerous shows, anthologies, and series for prime time and afternoon prime.

"I would say I have been able to hone my craft to meet the demands of the current TV landscape.”

Direk Dominic, who is currently directing The World Between Us, has been with GMA-7 since the late 1990s.

He says, “With every new project I continue to be genuinely thrilled with the process of its creation.

"And every time I am still fascinated with how I can execute a script in a different, perhaps fresh new way. For me, there is a pureness in the joy of telling a story.”

Direk Mark, currently the director of I Left My Heart in Sorsogon, looks forward to engaging a wider audience reach.

He says, “With all the new emerging media platforms, I’m looking forward to new genres that will tackle a wider range of audience not only in the Philippines but targeting the global market.”

She says, “I've been privileged to have been allowed to bring some aspects of how I do films into TV.

"There are technical and production principles that have been applied in my last shows.

"So with all this exploration, I hope to continue in the upcoming projects and push for quality in all aspects.

"I hope to ride on the trend that film and tv are no longer different in terms of production value and story.”

In the same vein, Direk LA, who directed First Yaya, is also pushing for new techniques in directing television dramas to keep up with trends in streaming media.

Some of the top-rating drama programs of GMA-7 have been directed by veteran actors Ricky Davao, Gina Alajar, and Laurice Guillen.

He says, “From exploring new storylines, themes, and different platforms. I am also excited because GMA has invested in state-of-the-art equipment to bring these stories to life with beautiful visuals.

"I look forward to these stories being presented across the country and worldwide.”

Direk Gina, whose current work is Prima Donnas, is a big fan of Korean dramas.

She says, “Since I am a fan of Korean Dramas, hopefully, in the future we can try different approaches in the making of, different star combinations, and, hopefully, we can have more epic dramas.”

She says, “It was a proud moment not just for me but for the entire team – production, creative, technical, and the actors."

"In all the years, I have been a director with Kapuso, I have felt very happy and at home.

"Kapuso has always kept a personal and professional connection with me, which I value very much.”

From doing other program formats, Rico Gutierrez and Monti Parungao have come on board as directors of Kapuso dramas.

"Masaya siya. Don't want to sound cliché, but I love my work.”

Direk Monti, on the other hand, wants to focus on his storytelling, “I am looking forward to new ways of storytelling.

"New plots and twists that we can execute in the new production procedures brought by the pandemic safety protocols.

"The application of new visual quality brought by new technology is always a plus whenever we get new projects.”

He says, “With the rise of on-demand streaming platforms, the taste of the Filipino audiences has been elevated. It paved way for us, artists, to be more experimental in giving new and artful executions on our TV programs.

"My primary aim is for original Filipino content to be able to compete in the world stage.”

Direk Zig, whose most recent work is the epicserye Legal Wives, wants to continue doing these types of shows in the future.

Direk Neal, who used to do work as a producer, says that their craft is a continuous learning process: “As a director, our responsibility as storytellers is to touch hearts.

"I never stopped learning new things when it comes to honing my craft.

"Knowledge is a continuous effort but should be coupled with passion, dedication, maturity, and humility.”

Direk Rechie, who started her directorial career at ABS-CBN, says that she is proud of her most recent GMA-7 work, First Yaya.

“I am a Kapuso director for five years now. My proudest Kapuso moment is being involved with First Yaya, which was a phenomenal prime-time rater and is now moving to create its book two, First Lady.”

GMA-7 also pays tribute to its veteran creative heads who "create and elevate stories into a visual masterpiece that will give the audience the best viewing experience.” 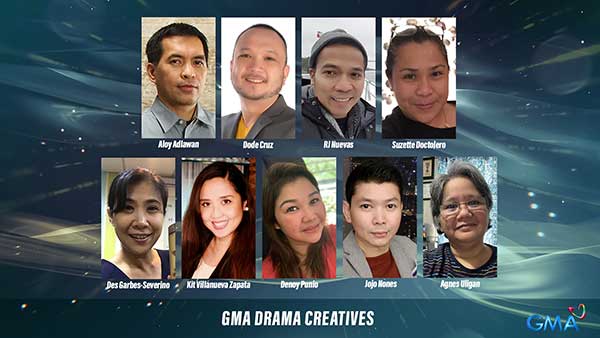 Aloy, who has been writing for GMA Telesine Specials in the late 1990s, says that Sine Novela: Magdusa Ka, his first teleserye as head writer in the network, has remained his most favorite.

He says, "The show not only went into air with really high ratings, but it was also the first GMA drama show that was nominated in the International Emmys for Best Telenovela."

He says, "To this day, my most favorite soap that I conceptualized is still Ikaw Lang ang Mamahalin because it was the first successful GMA-7 produced soap that paved the way for the current GMA Telebabad.

"It was my very first soap opera head writing job where I learned so much. I was so euphoric seeing my first baby become a hit for my beloved home network."

RJ shares that his favorite shows have been the successful dramas Ika-6 Na Utos and Anna Karenina “because of how these shows resonated with the audience.”

Suzette chooses three of her iconic works: “Encantadia because I felt like a child again when we were writing that show, Amaya because I’ve learned a lot kasi ang dami kong books na binasa for that, and My Husband’s Lover because it was so beautiful. It talks about love, it’s liberating.”

Des cites I Can See You, for all the difficulties everyone hurdled while taping the show in the strictest pandemic conditions.

She says, “It was the first show that was taped during the pandemic, and we were just so happy to prove that it could be done.

"That it was well-received by the viewers was just a bonus. I felt at that time that it proved our resilience and assured us that entertainment was still essential even during the pandemic.”

"Grazilda is a feminist antihero—a standout, not like any other I’ve ever written.

"She is selfish, temperamental, bratty not a typical protagonist by any means, but she certainly has depth.”

Denoy’s choice is her currently airing program To Have and To Hold.

"She explains, “I wanted to create a series that encapsulates a breakdown of a marriage and how the characters deal with their disillusionment, the pain of betrayal, and how to also heal from it.”

Jojo, who first did comedy shows for the network, says doing First Yaya was one of his proudest moments as a Kapuso.

He relates, “I felt so proud and grateful when First Yaya was the number one program in the country, regardless of genre or format.

"I would get private messages from viewers thanking First Yaya for lightening the loads that they carried especially during the time of the pandemic.”

Agnes, who was originally from ABS-CBN, enumerates Daig Kayo ng Lola Ko and Love of My Life as her favorites.