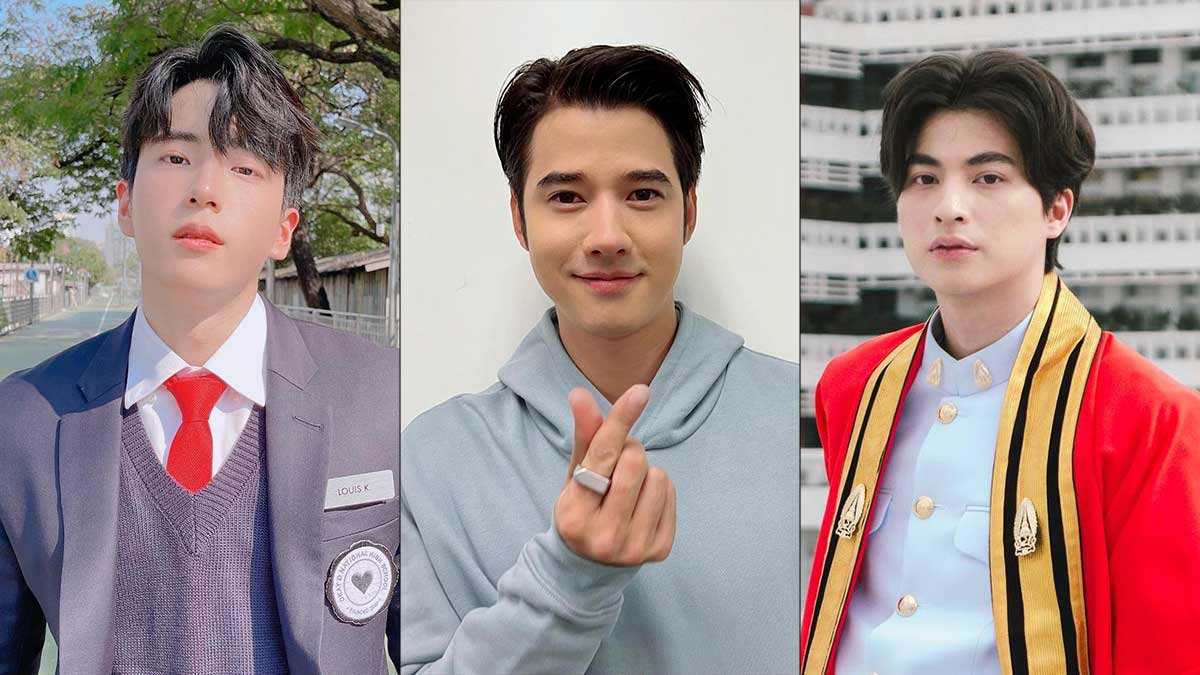 Mario has been popular in the Philippines since the release of the movie Crazy Little Thing Called Love (2010). He was also paired with Erich Gonzalez in Star Cinema's romantic comedy film Suddenly It's Magic (2012).

Nonkul captured the attention of Filipino moviegoers with the release of his 2017 hit movie Bad Genius.

Gulf, on the other hand, is one-half of the popular boy love couple #MewGulf.

Would all three of them be open to doing a movie or TV project in the Philippines?

During their virtual press conference for TNT Kilig Fest Christmas Special on December 11, 2021, the Thai actors shared their picks of local stars they would love to work with, if given the chance.

Nonkul would like to work with GMA-7 actress Marian Rivera.

He said, "If I have a chance to work with any actress or actor, [it] would be Marian Rivera.

"Because I saw some of her work, and I think I really like her acting, but she’s like quite this senior, not senior in that way...

"A veteran actress! So I would like to work with her."

For Mario, it would be Kapamilya actress Sue Ramirez.

He said, "I work with many many actor and actress in the Philippines. I’m really open with everyone, but for me to choose one now, I choose Sue Ramirez.

"She’s very beautiful and very talented. I would love to work with her."

Gulf did not specify any local actor or actress, but said he is "open to working with anyone in the Philippines," as translated by former MTV VJ Utt Panichkul.

The two stars did not buy anything for themselves, but both received a lot of gifts from their fans, whom they miss very much.

Mario said, "I didn’t buy any gift for myself.

"It’s only other people buying me the gift and it’s like a very cute stuff from my fans they gave me some leather.

"And for all my love one, they give me a big pillow."

For his part, Gulf said, as translated by Utt, "Same as Mario, he didn’t purchase anything for himself. And basically, he had a lot of gifts from his fans."

If not for the COVID-19 pandemic, the three Thai stars would have already visited the Philippines and staged a fan meet for their Filipino fans.

Nonkul, Mario, and Gulf all expressed missing their Filipino fans very much since they all have been to the country for fan meets in the past.

For Gulf, the warm reception he received from his fans when he first visited the country was one of his most memorable experiences.

"And at the time like he felt that he wasn’t as popular just yet as he is now, but just the feedback and support and encouragement that he was getting from the fans was just very overwhelming."

For Mario, his crazy experience with Filipino fans happened during the premiere night of his movie Suddenly It's Magic.

Mario said, "I did a movie Suddenly It’s Magic, the day that it’s premiered, it’s like… everything is… is like crowded.

"They have the red carpet, it’s all like squeezed-up. Because so many people that squeezed [us] the way we walked.

"I’m really shocked. And my co-actress, she cried... She was shocked."

Nonkul clarified that he did not really have a "crazy moment" with a Filipino fan, but he was impressed and pleasantly surprised by how great his Filipino fans are at singing.

The 25-year-old Bad Genius actor told the press, "I wouldn’t say crazy. But more like surprised. That I have one fan meeting once in the Philippines and then I sing a song, right?

"Then I go down to, you know, let the fans sing for me, too. And all of them… and I mean every single one of them sing better than me.

"Like, every single one–I try to find someone maybe a little worse than me, so I can feel a bit better with myself. No. Everyone is great at singing."

All three stars are glad that they will be able to meet some of their Filipino fans virtually for the second time via the TNT Kilig Fest Christmas Special.

Mario said, "Of course, we are excited to meet all the fans and of course, so many at the same time.

"Even [if] we are far from each other, but it’s still like a kilig moment in there. And of course, we will have a great time together. It’s just very great and good time."

The fan-meet event will be streamed on December 28, 2021, via Giga Play, a mobile application where TNT and Smart subscribers can watch exclusive content like entertainment, music events, sports, and other videos for free.