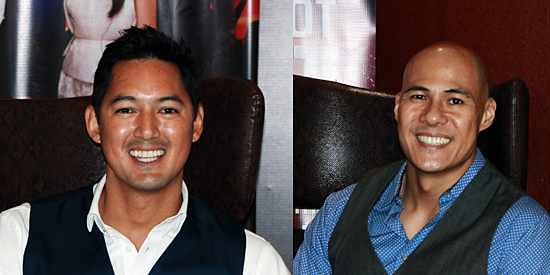 Marc Nelson (left) and Rovilson Fernandez describe the judging styles of the four mentors of Asia's Got Talent that was shot in Malaysia recently. The judges were Vanness Wu, former Spice Girl Melanie C, Anggun, and David Foster.

Rovilson Fernandez and Marc Nelson will serve as hosts of Asia's Got Talent, the world's first ever pan-regional edition of the global hit Got Talent format.

In an exclusive interview with PEP.ph (Philippine Entertainment Portal), the two hosts gave their observations about the judging styles of the four mentors.

They were tasked to select among thousands of Asian individual or group acts who will advance to the semi-finals.

By then, viewers will get to decide who will win the first season of Asia's Got Talent.

Adding to the excitement, the semi-finals and finale will be held at the Marina Bay Sands, Singapore, with the winner awarded a contract to return and perform live.

Asia's Got Talent is the 63rd version of Got Talent, which won the Guinness World Records title for being the world's "Most Successful Reality TV Format" in 2014. The hit format is co-owned by FremantleMedia and Simon Cowell’s Syco Entertainment.

According Rovilson, they shot Asia's Got Talent in a location that he described as the "best studio in Malaysia."

Whe did they accept this hosting gig?

Marc candidly answered, "Who wouldn’t accept this? Are you kidding me? This is the chance of a lifetime.

"It’s a lot of fun, there’s an enourmous studio there, it’s an amazing opportunity and we got to work with the best production team."

Did the two hosts see the judges have clashes because of differences of opinions regarding a certain act.

"Oh yeah," Rovilson recalled. "There’s always moments...there will be some disagreements, especially when you are deciding on the fate of an act, and they understand how important it is for this act.

"So they’re very conscious of that, they’re very wary of that, but what I love about them is that they always put the show first. They always say: 'is this best for the show?'"

As for Marc, he pointed out: "There are different clashes, you will see that there are clash of personalities, definitely differences in opinion, and I think that’s what makes a good judge.

"Sometimes they’ll see something that the other judge won’t and they’ll stand up for it and they’ll explain, and so, we do see that happen."

Marc believes "the judges, in a way, are the voice of the audience."

ON STAND-UP COMEDY. Personally, Rovilson is a big fan of stand-up comedy acts.

He admits, "I like to root for everything. I’m a cheerleader.

"I don’t remember their names, but I’ll always have a soft spot for stand-up comedians.

"Because I believe stand-up comedy is the most basic form of entertainment performance, you’re just completely naked out there, it’s just you, a microphone, and your thoughts that’s it."

However, he is not fond of the "Pinoy style" that pokes fun at people in order to generate laughs.

"Then there’s the pinoy style, yung mga bakla, and do green jokes. Not that kind. That’s not what I’m a fan of."

PEP.ph asked Rovilson and Marc to share their observations about the four judges of Asia's Got Talent and here are their thoughts about these performers:

Rovilson: "You have a member of the world’s biggest girl band of all time, yet she’s so cool, she’s so down to earth. And I love the fact that all her decisions are based on anything that’s girl power, anything that’s empowering women, making things positive, showing women in a positive light. I love that she has such conviction in that. And anything having to do with dance and music, she’s an expert."


Marc: "Who would thought that we would be working with a Spice Girl. Oh my God! So many people grew up listening to the Spice Girls and Melanie C she’s gone so much further than just being Sporty Spice. Although, she is still ridiculously fit. I mean, to be a mother and working for so many years, she’s so fit, she’s fitter than I am for sure, probably much better abs. She’s one of the most top-selling artists in Britain of all time. She has a hugely success Broadway career. She’s just cool. She’s cool, she’s quirky, she has very strong accent, and she’s always smiling, I like that about her."


Rovilson: "I love how Vanness is the kindest judge, I’ll leave it at that. He’s one of the kindest judges, an absolute expert when it comes to anything or any act or talent when it comes to dance, hiphop, urban music, contemporary music, he really knows what he’s talking about. And he’s very pro Asian, very pro Asian. Always defends culture, Asian culture, he’s a champion at that."


Marc:"Automatically goes to the gwapo.

"The only thing I knew about Vanness before was F4, you know, like boyband guy. What’s he like outside his boy band, and I tell you what, he is the nicest guy. Really a nice guy. And because he lives and works in Asia, he knows Asian flavor. So, sometimes for instance, the judges will be like, no this doesn’t really work. He’ll stand up and say this is what works in Asia. Because he knows what Asian taste is like. He’s just the nicest judge. He produces, directs, acts, dances, sings 6 languanges, he helps translate, he’s a one man show, very nice guy."

Rovilson: "Such a lovely sweetheart. Kind heart. She doesn’t like anything that’s violent. So any act that has like swords, or fighting, or anything like that, she’s not a fan of anything violent."

Marc Nelson: "Beautiful, beautiful person inside out. Rivilson mentioned earlier she has an incredible voice, speaking voice, singing voice, again very talented. She has an album in three different languanges. Biggest selling recording artist of all time in Indonesia. Just a beautiful soul, you know you talk to her, and you’ll be like, you’re just so nice. I like her a lot."

Rovilson: "A phenomenal, the anchor of all the judges. He gives out great advice, every time he opens his mouth, whatever comes out of his mouth will be gold. He’s such a quotable guy, great advice.

Marc: "David Foster, the legend. There’s a reason that he’s the legend, he’s worked with some of the biggest names in entertainment, 47 Grammy nominations, 16 Grammy wins, he can watch an act, listen to an act, and immediately pick it apart and tell them what is wrong, how to improve, and you know, what they need to do to make it better, and he’s really, he won’t pull an punches. He’s got two nicknames in the show, internationally he is known as David Foster, here he’s known as the dream maker and the dream crusher. Because if you get like a big yes from David Foster, you know you’ve done something right. But if you’ve gone on stage and you don’t really have the talent to be on that stage competing with the best in the world, he will tell you straight to your face, I’m sorry, he will say it in a nice way, I’m sorry you’re just not good enough."

TOUGH ACT OF CHOOSING. Marc appreciates the fact that David Foster helped them a lot while they were hosting Asia's Got Talent.

"Personally [David] is such a nice guy. Very, very supportive of Rovilson and us as host. He will try to give the best advice."

Having seen a lot of acts during their hosting stint, Marc looks up to the bravery shown by the contestants.

"These acts, they go up there, they’re pouring their heart up there...for their courage and talent.

He described the acts as "extraordinary" although they cannot describe what they saw on the show.

"I’m not allowed to say anything about the act, all I could say is they are all extraordinary. You’re gonna have to watch the show to find out. You’re gonna be blown away. I had so many, just wow, moments, I was like, I didn’t realize that was possible or didn’t expect that.

"I cried, I laughed, I jumped and down for joy, you name it, and that happened every single day."