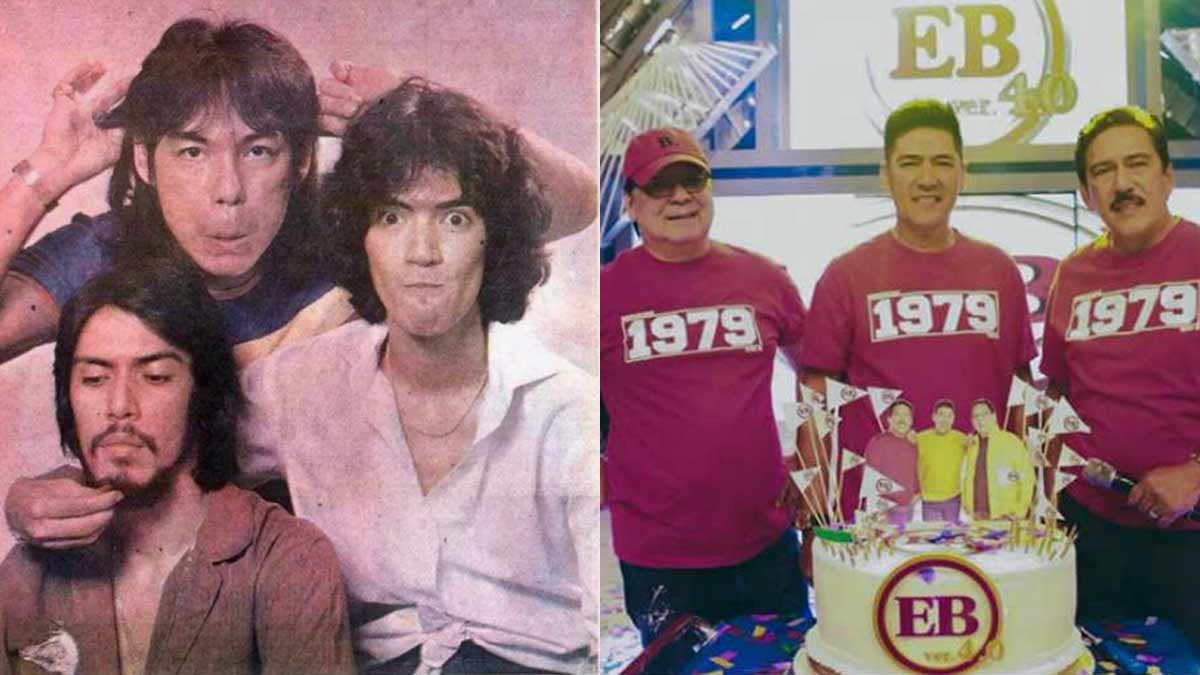 Tito Sotto, Vic Sotto, and Joey de Leon were originally part of Discorama before they became hosts of Eat Bulaga!. Discorama shared the same producers as the noontime show Student Canteen, the reason why it became hard for the trio to say yes to the hosting offer.
PHOTO/S: Eat Bulaga File Photos

The TVJ trio of Tito Sotto, Vic Sotto, and Joey de Leon has been known as the legends of Eat Bulaga! since the show started airing in 1979.

But it seems the trio was initially iffy in accepting hosting duties for the noontime show that has been airing for almost 43 years.

In the late ‘70s, GMA-7’s Student Canteen was already the number one noontime show in the country, beating all noontime shows that would try to go against it.

Student Canteen was produced by Program Philippines, Inc. owned by the late Bobby Ledesma and Eddie Ilarde. They also hosted the program.

It was Romy Jalosjos, owner of independent TV special events producer Production Specialists, who thought of going against Student Canteen.

Choa-Fagar recalled, “Because iyong owner, si Mr. Jalosjos, nakita niya na there is a room for another noontime show because there was only one noontime show which was Student Canteen, so may market.

“So, they decided to come up with a noontime show ‘tapos they were thinking of hosts.”

Jalosjos’ associate, Antonio Tuviera, thought of getting TVJ as the show's hosts.

But there was one hurdle they needed to overcome for the plan to push through.

Choa-Fagar continued, “That time, Tito, Vic, and Joey were hosting Discorama and they would pinch-hit for Student Canteen.”

“Tough Hits” was a segment where the TVJ trio would do parodies of the Top 10 pop tunes at the time by changing the song lyrics.

It became such a hit to viewers that Discorama—which was already bent on being canceled—stayed on the air.

In the chapter “Landing The Trio” of the book Eat Bulaga: Ang Unang Tatlong Dekada, more details about the offer for Tito, Vic, and Joey to host Eat Bulaga! were revealed.

It was not the first time Tuviera came face to face with Tito, Vic, and Joey, having worked with them in the IBC-13 gag show, Okay Lang.

The producer first spoke with Tito, whom he got to work with in the ‘60s.

Tito politely said no. As a matter of delicadeza, the trio would not accept any show going against Student Canteen while working for Discorama.

Then, Mr. Tuviera invited Tito, Vic, and Joey for the regional searches of Binibining Pilipinas, which was produced back then by Production Specialists.

During the trip, Mr. Tuviera saw how Tito, Vic, and Joey were enjoying the company of Production Specialists officials and key personnel.

Upon returning to Manila, Mr. Tuviera once again brought up the offer.

“The answer was still a unanimous NO,” according to the book. “They wished to remain loyal to PPI, and, on top of that, it was still inconceivable for them to go against Student Canteen at that point.”

But, as the book also said, Mr. Tuviera remained “undaunted” and did not give up on TVJ. He made it known to them that he was just waiting for their “sweet yes.”

The challenge became harder for Mr. Tuviera when two more producers reached out to TVJ for a noontime show offer.

First was Jun Hizon, a TV producer who wanted TVJ to star in a noontime program on BBC-2.

The other was the “bigger threat,” as described by the book. He was Boy Gatus, the producer of TVJ’s sitcom on IBC-13, Iskul Bukol.

READ: Famous child stars of Eat Bulaga!: Where are they now?

“WE WON’T BE SEEING YOU ANYMORE.”

Despite the many offers, Tito, Vic, and Joey were banking on the “hiya” factor, not accepting any offers and maintaining their loyalty to PPI.

However, one confrontation between the TVJ trio and Bobby Ledesma ended their working relationship.

“So sabi ni Mr. Bobby Ledesma sa kanila, ‘So we won’t be seeing you anymore?’

“Inunahan sila, samantalang they were just thinking about it. I mean, I don’t know, they were considering it, basta inunahan sila ni Bobby Ledesma.”

The Eat Bulaga! book, in the chapter “Discodrama,” gave more details about the incident.

The incident happened one Saturday afternoon in early 1979. As described in the book, “there was tension and ice almost formed on the wall as soon as Bobby Ledesma walked into the studio.”

Bobby confronted them and said, “We heard that you are accepting a show against Student Canteen.”

TVJ, of course, denied it. After all, they were not accepting any offer from anyone.

However, Bobby did not give TVJ the chance to air their side when he told them, “So I guess I will not see you next week.”

When they left Discorama and were finally free to entertain offers, the trio was still not so sure if they could handle a daily noontime show, knowing that Student Canteen “was a giant and fighting it was like running against a brick wall.”

As parting words, Bobby told Tito, Vic, and Joey: “Of course, if you beat us, you will become the biggest stars in the land.”

Eventually, Tito agreed to take Mr. Tuviera's offer to do the noontime show.

Joey followed suit. At that time, he was also a DJ who liked hanging around the office of record label Vicor, where Tito worked as one of the top executives.

Getting Vic to say yes was a more challenging story.

Mr. Tuviera was advised to come to Hotel Intercontinental and catch the comedian during a filming break for the movie Rock, Baby, Rock.

What made it more exciting was that Boy Gatus was also bound to go to the hotel to pursue the trio for the noontime show he was cooking up for IBC-13.

The book recounted what happened next.

“With a formal contract in one hand and a bottle of Asti Spumante [sparkling wine] in the other, Tuviera rushed in front of the Intercon Hotel and accomplished his mission. He knew he had to move fast because Boy Gatus was close on his heels.

“True enough, Gatus came half an hour later. As it turned out, Tito, Vic, & Joey had agreed among themselves earlier that they would sign up with the producer who would get there first.

“Tuviera did and after almost two years of chasing after Tito, Vic, & Joey, he finally got the talents for his company’s dream noontime program.”

The rest is history.

Now on its 43rd year on air and 27th year on GMA-7, Eat Bulaga! remains the longest-running noontime show, with TVJ declaring that their partnership is “forever.”