8 married showbiz couples who fell in love on the set 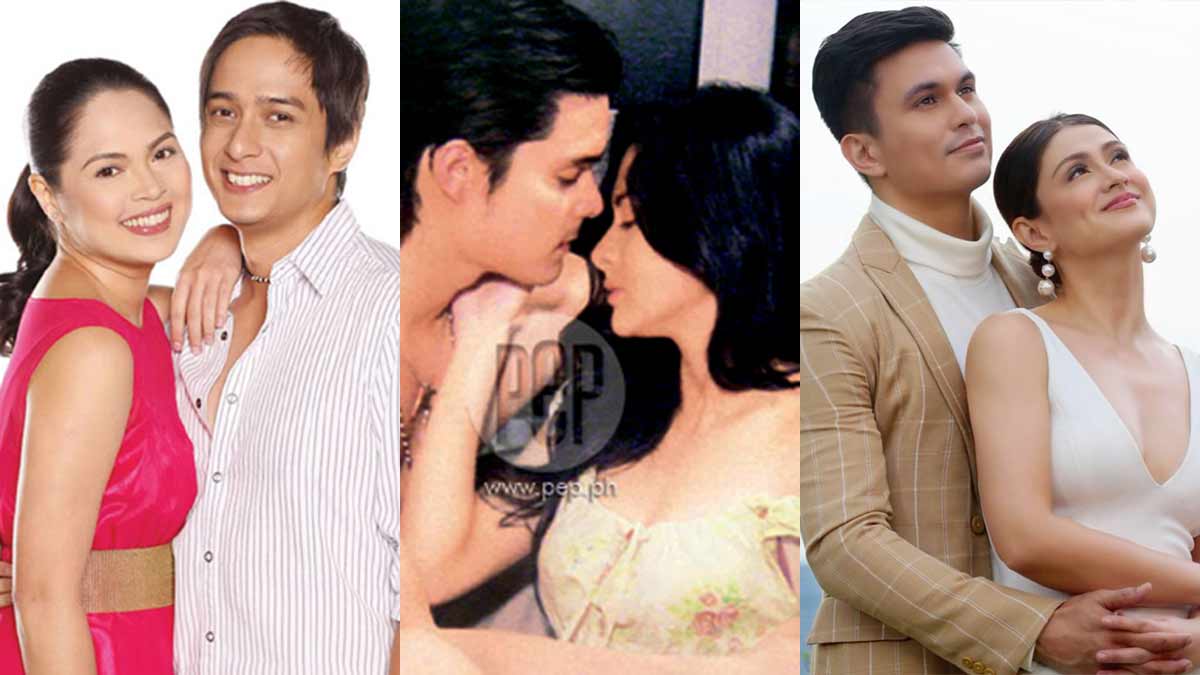 (L-R) Judy Ann Santos and Ryan Agoncillo, Dingdong Dantes and Marian Rivera, and Tom Rodriguez and Carla Abellana are on-screen partners who got into real-life romances and are now married!
PHOTO/S: ABS-CBN / GMA-7 / @carlaangeline on Instagram

It is not new for celebrities who are paired with each other to fall in love and bring their on-screen romance to real life.

After all, they are together for long hours of taping aside from doing sweet scenes with each other.

But this does not only happen to love teams. Sometimes, co-stars just click with each other which leads to a real-life romance.

Not only that, some are successful in finding love from their on-screen partners and they end up marrying each other and building their own family.

PEP.ph (Philippine Entertainment Portal) lists down eight pairs of married couples whose love stories started on the set of a drama series.

Judy Ann Santos and Ryan Agoncillo met on the set of her prime-time series, Krystala, in 2004, where he played her leading man.

Judy Ann and Ryan fell in love and got into a relationship. Their romance also reflected on-screen with the success of their two movies: Kasal, Kasali, Kasalo (2006) and Sakal, Sakali, Saklolo (2007).

In April 2009, Judy Ann and Ryan got married in Batangas, which was called the “Secret Wedding of the Year.”

After their wedding, Judy Ann and Ryan worked together in a sitcom titled George and Cecil. In 2010, Judy Ann gave birth to Lucho, their first child. Judy Ann got pregnant again in 2015 with their youngest, Luna.

The couple also has an adopted daughter, Yohan.

Judy Ann and Ryan’s last project was the 2011 movie My House Husband but the couple is constantly seen in Judy Ann’s YouTube show, Judy Ann’s Kitchen, where Ryan makes special appearances aside from directing her in the YouTube show. 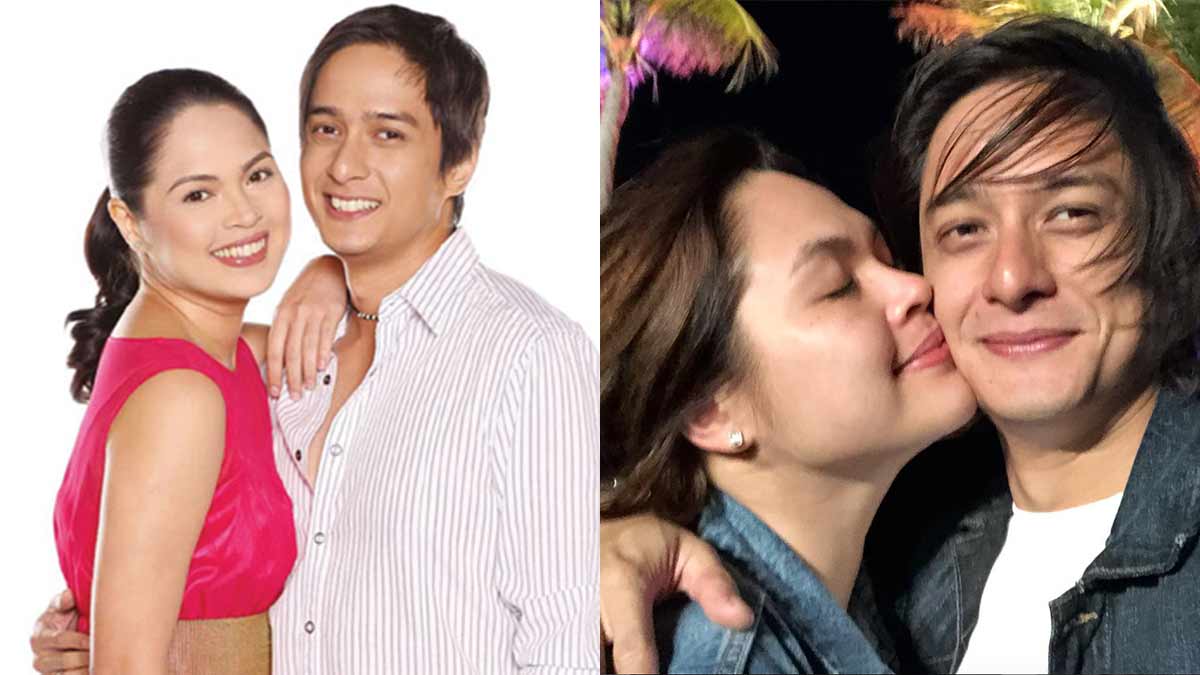 Marian Rivera and Dingdong Dantes first worked together in the 2007 drama series MariMar, where Marian played the title role and Dingdong was her leading man.

But romance did not flourish instantly as both of them were still in a relationship back then. Marian was with Ervic Vijandre while Dingdong was with Karylle. Both of these relationships ended in 2018.

However, fans fell in love with the on-screen chemistry of DongYan that they were paired again in another project in 2008, Dyesebel, which premiered just two months after MariMar ended on TV.

In February 2009, Marian and Dingdong did Ang Babaeng Hinugot Sa Aking Tadyang. While doing the project, in March 2009, the two admitted to be dating, much to the delight of their love team’s supporters.

After Ang Babaeng Hinugot Sa Aking Tadyang, Marian and Dingdong parted ways on television for their next projects but would be paired again in two teleseryes: Endless Love (2010) and My Beloved (2012).

In 2014, Dingdong proposed to Marian on national television via Marian’s self-titled dance show. The kilig moment became a trending topic on social media.

In December 2014, Dingdong and Marian officially tied the knot. They now have two kids — Zia, 6, and Ziggy, 2.

As for their projects, the last time the DongYan tandem was seen on a teleserye was during the pilot week of Encantadia 2016 remake.

In December 2021, Dingdong and Marian hosted GMA Public Affairs’ year-end special, Year of the Superhero, which became their reunion on TV after five years. 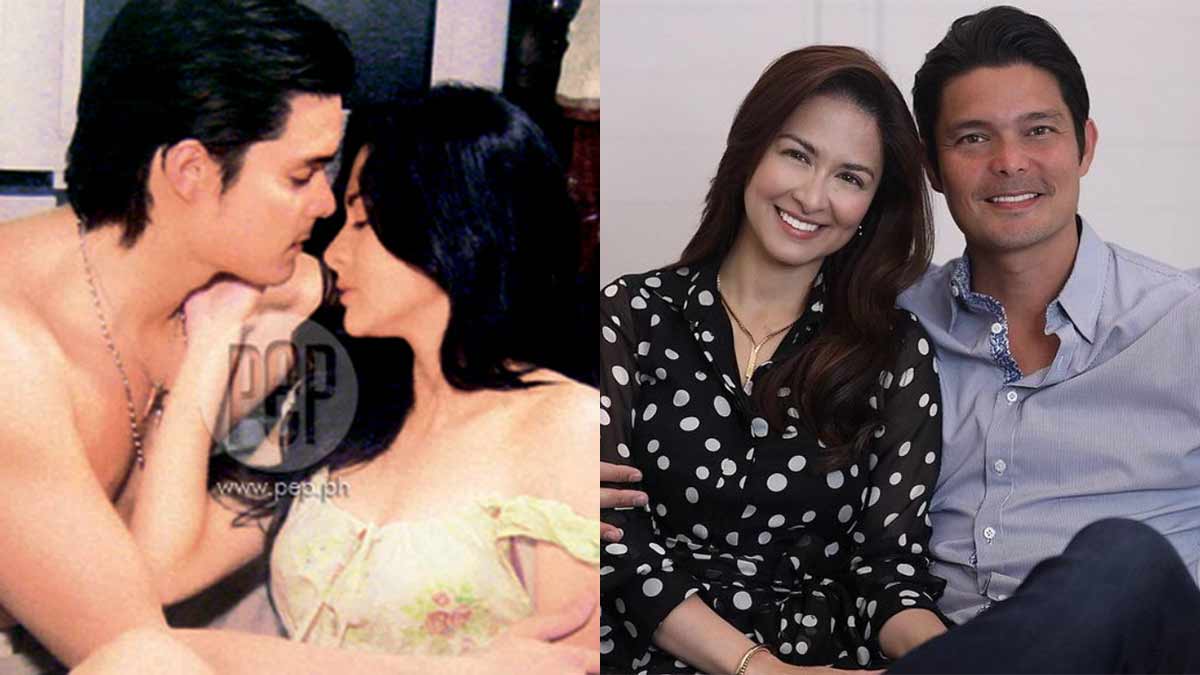 Jennylyn Mercado and Dennis Trillo first worked in the drama series Now and Forever: Dangal in 2006 and Super Twins in 2007.

But romance between them happened in 2010 when they worked together in the afternoon drama series Gumapang Ka Sa Lusak.

In 2011, however, Dennis and Jennylyn had a big fight that ended their relationship.

In 2015, Jennylyn and Dennis would be working again in the prime-time series My Faithful Husband, which became the gateway for a rekindled romance for them.

Dennis even declared during the show’s presscon: “Love is lovelier the second time around.”

Although they did not work together anymore in teleseryes, Dennis and Jennylyn did music collaborations on their YouTube channel titled CoLove. It even became a concert in February 2020.

In October 2021, the DenJen couple surprised their fans when they announced their engagement and that Jennylyn is pregnant.

The two got married in a civil ceremony in November 2021. 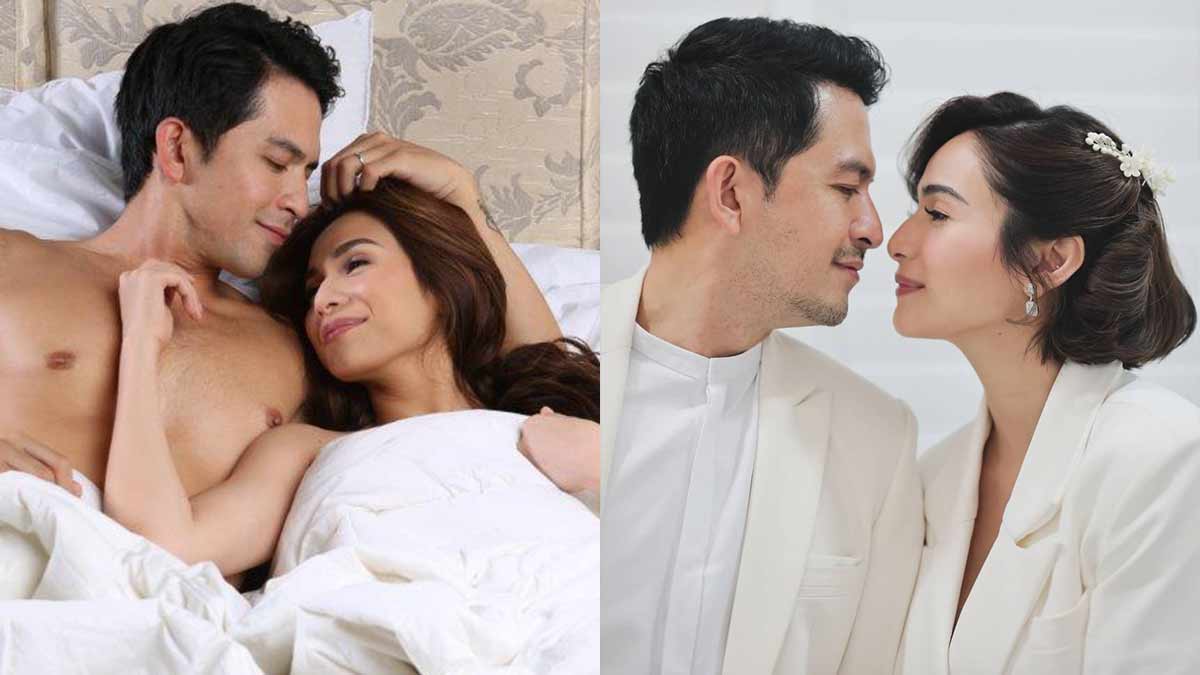 Carla Abellana and Tom Rodriguez first worked together on the GMA-7 ground-breaking series My Husband’s Lover in 2013.

In the series, Carla played Lally, a housewife who discovered that her husband, Vincent (Tom), is having an affair with a man named Eric (Dennis Trillo).

During My Husband’s Lover, Carla was still in a relationship with her ex-boyfriend and former on-screen partner, Geoff Eigenmann. Their relationship ended in early 2014.

In June 2014, Carla and Tom would be paired again in another GMA-7 series, My Destiny. A month later, Tom revealed that he had been courting his leading lady.

In 2019, Carla and Tom admitted that they are already in talks of getting married but it was in March 2021 when they got officially engaged.

The TomCar love team got married on October 23, 2021 in Batangas. This is despite the pandemic restrictions and both of them being busy with their respective teleseryes. Carla was doing To Have and To Hold while Tom is part of The World Between Us. 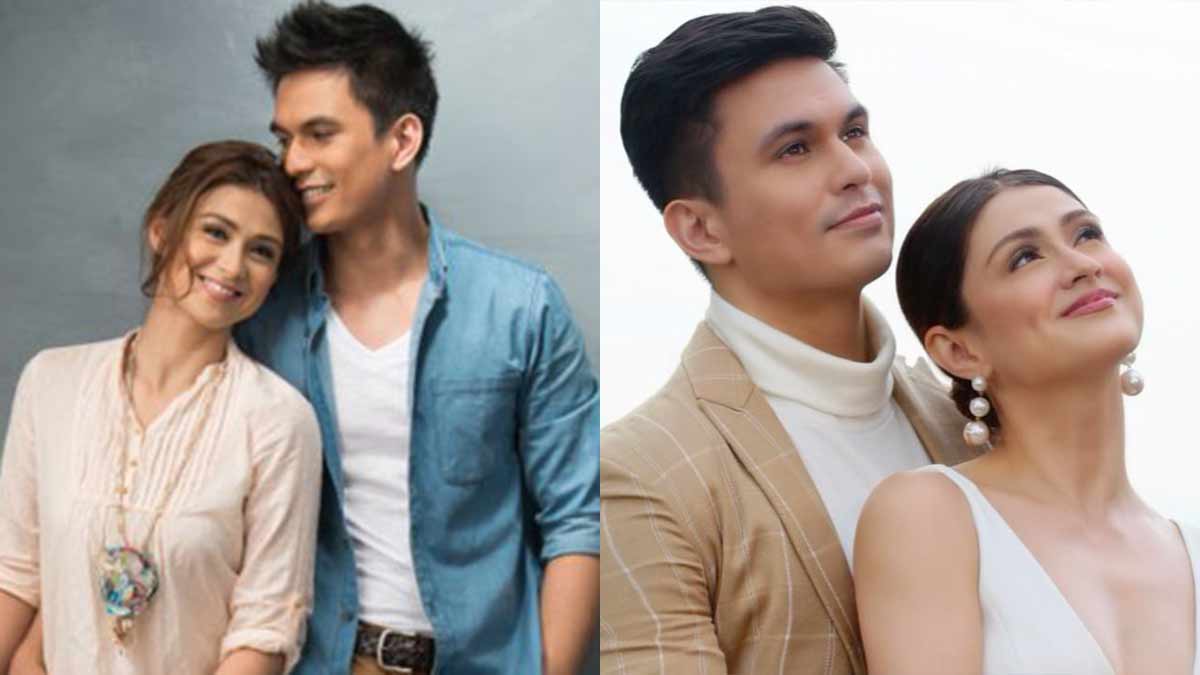 Sarah Lahbati and Richard Gutierrez met on the set of Makapiling Kang Muli in 2012. It was when Sarah became one of Richard’s leading ladies, along with Carla Abellana.

Richard admitted that he and Sarah are an item in October 2012.

In January 2013, Sarah had issues with GMA Artist Center. This prompted her to go back to Switzerland to resume her studies.

However, a source told PEP.ph that Sarah had given birth in April 2013 to her baby with Richard.

In June 2014, Richard blurted out a statement in It Takes Gutz To Be A Gutierrez that he is a "proud father," confirming the report that indeed, he already has a child named Zion.

The two were supposed to hold a big wedding on March 14, 2020, but they had to postpone it because of the COVID-19 pandemic.

Even then, they were able to push through with the wedding on the same day but through an intimate celebration. 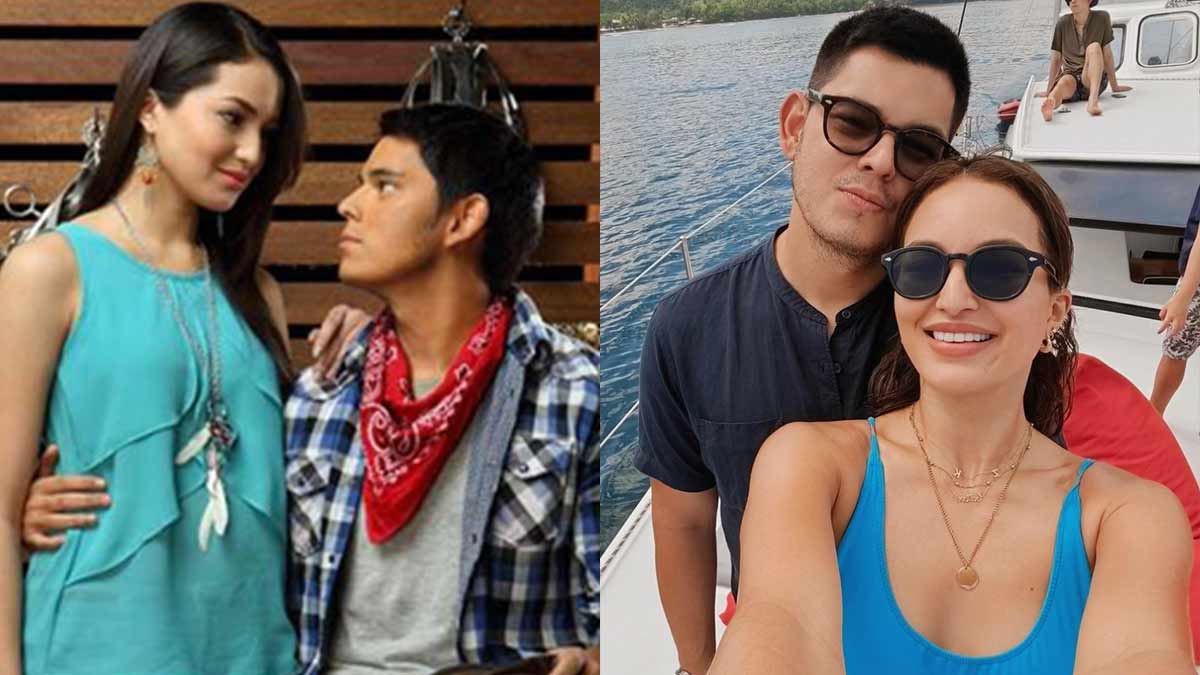 Iya Villania and Drew Arellano first met on the set of GMA-7’s youth-oriented show Click in 2003, where they were first paired as a love team. It was also during that time when their relationship started.

When Click ended in 2004, Iya transferred to ABS-CBN while Drew remained in GMA-7, but this did not become a hurdle in their relationship.

In 2014, or eleven years after they first met on the set of Click, Iya and Drew got married.

Iya and Drew had the chance of working again when Iya returned to GMA-7 in the same year she got married. They worked in the game show People vs. The Stars in 2016.

Iya is also pregnant with their fourth child. 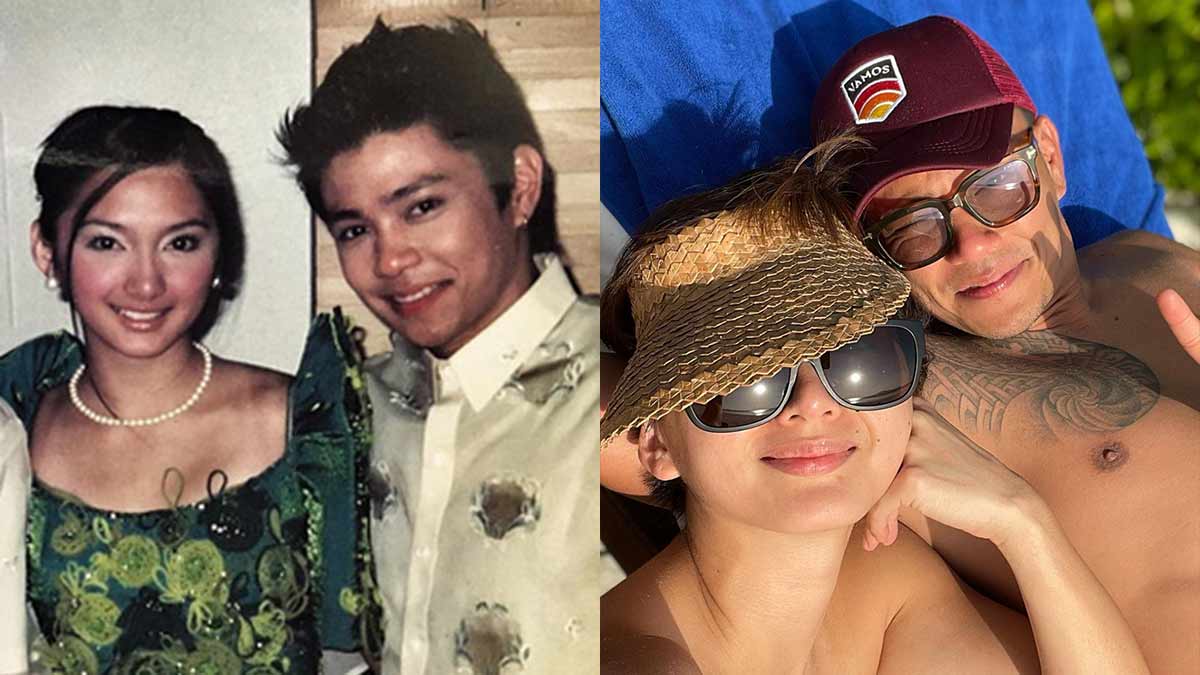 Gladys Reyes and Christopher Roxas first met on the set of the ABS-CBN drama series Mara Clara in 1992.

Gladys played the main kontrabida Clara while Christopher was cast as Eris, a helper at Clara’s house who falls in love with her.

In real life, just like how their characters did, Gladys and Christopher fell in love and became together. They became a couple in 1993.

On January 23, 2004, the couple tied the knot at the Iglesia ni Cristo Central Temple in Tandang Sora, Quezon City.

They have also worked a few times in teleseryes like Pyra: Babaeng Apoy (2013) and Inday Will Always Love You (2018). 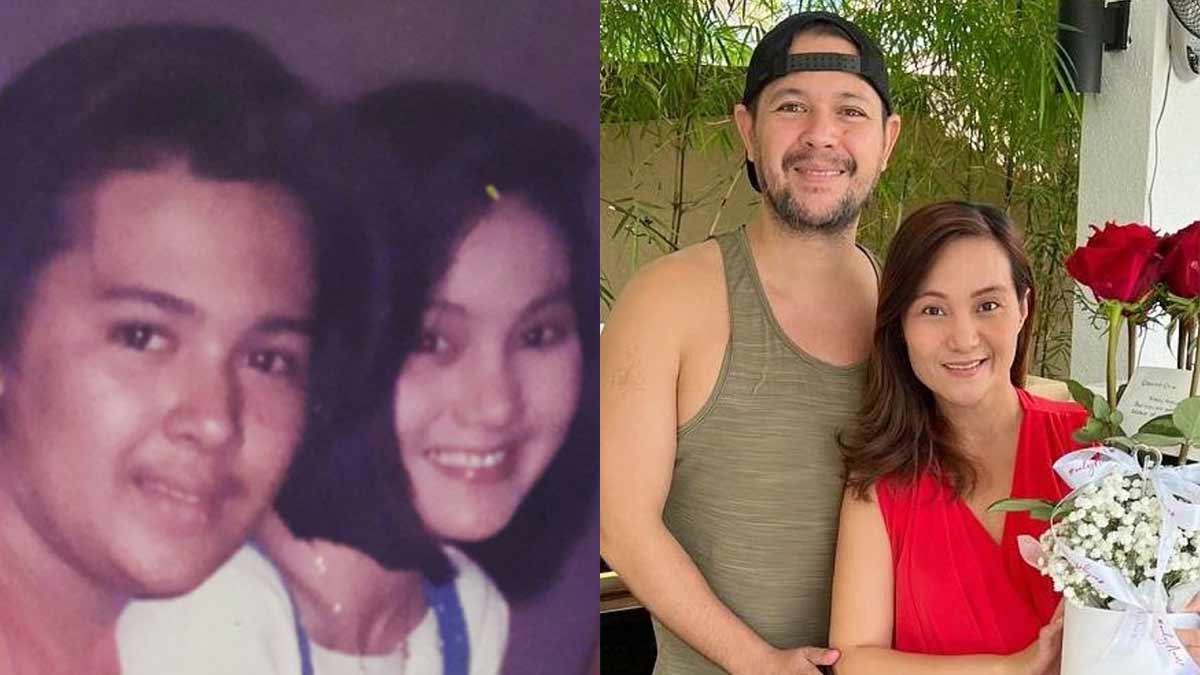 Mark Herras and Nicole Donesa first met on the set of the GMA Afternoon Prime series Bihag in 2019, but they were not paired in the series.

Mark played the role of the policeman who has feelings for lead actress Max Collins. Nicole portrayed the sidekick of the main kontrabida played by Sophie Albert.

When Bihag ended in August 2019, Mark and Nicole formally started their relationship. The two got engaged in June 2020 and revealed that they are expecting in September 2020.

In February 2021, Nicole gave birth to their baby boy. In September 2019, they got married through a civil wedding ceremony. 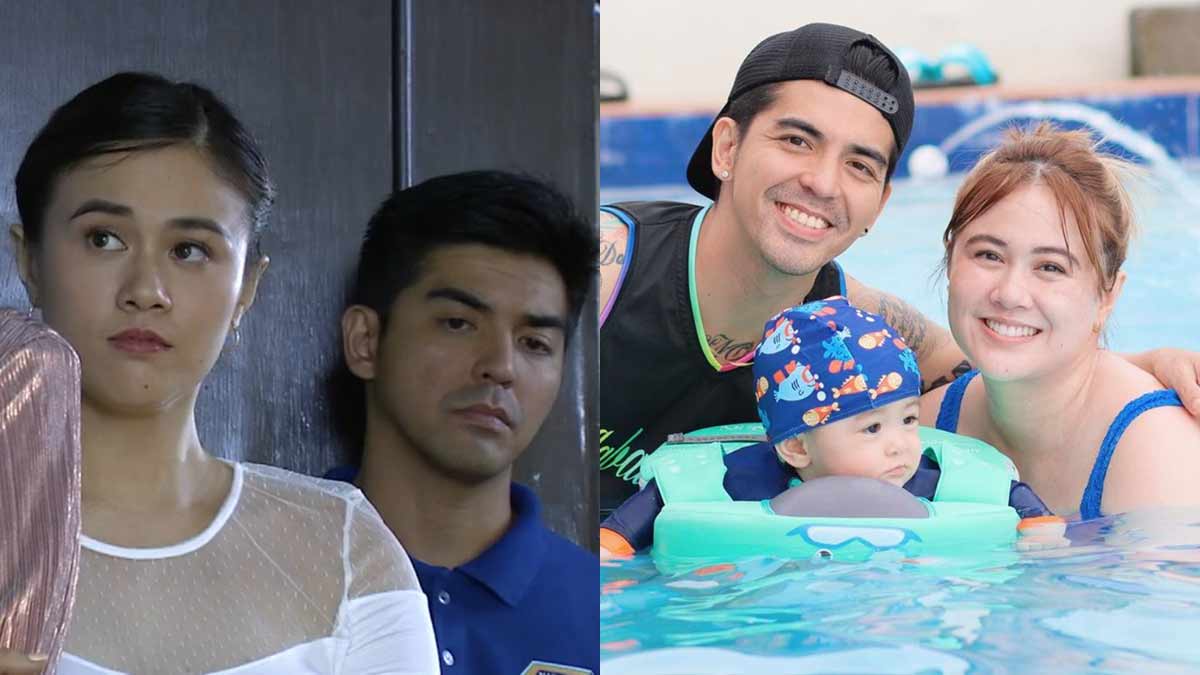