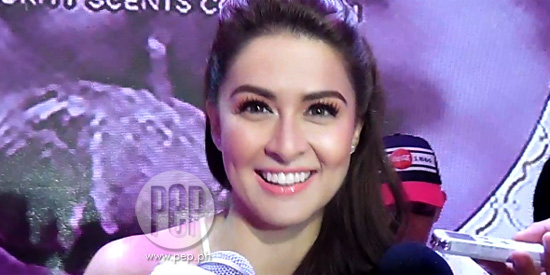 In a recent interview with the Kapuso Primetime Queen, she mentioned that as Mrs. Dantes, she makes it a point to consult her husband before accepting any project.

She cited her upcoming TV show, The Rich Man's Daughter, as an example of a project wherein she asked for Dingdong's opinion.

“Pero sabi naman niya, take it as a challenge.”

In the new soap, Marian is cast as a bisexual, which is a first for her as an actress.

She will play the role of Jade Tanchingco, an heiress from a very wealthy Filipino-Chinese family who has holdings in various industries such as real estate, retail and airline.

The youngest and only daughter, she is considered to be the real jewel in the family. In the story, Jade’s father announces that he is looking for a suitor for her and is willing to pay millions to any man who can make her fall in love with him.

Although she has never portrayed these kind of roles in the past, Marian said she did not hesitate accept the role of Jade.


Through her Facebook account, head writer Suzette Doctolero described Marian's character Jade as a "beautiful woman who is in love with another equally wonderful woman." Glaiza de Castro will be Marian's female love interest in the TV show while Luis Alandy is cast as the male love interest.


Through her Twitter account, head writer Suzette also gave additional information about The Rich Man's Daughter when she posted: "Working on a new Marian soap, we will air soon. We will talk about love, sex & relationships & yes, women loving women."

DIFFERENT FROM MY HUSBAND'S LOVER. Since The Rich Man's Daughter will depict a love story about lesbians, it could be compared to GMA-7's previous gay-themed teleserye, My Husband's Lover.

Despite this fact, Marian doesn't want to think about being compared to MHL.

Instead, she said, their group just wants to focus on offering something new to TV viewers.

What about showing delicate situations about lesbians or bisexual, which may still be taboo for some Pinoys?

The characters of Marian and Glaiza will figure in a love triangle with Luis Alandy. Joining them in this show are fellow cast members Katrina Halili and TJ Marquez.