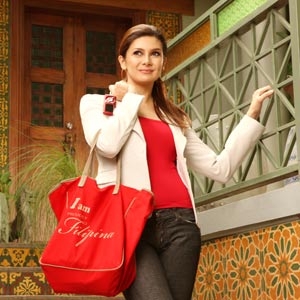 Starting February 29, Charlene will be presenting Filipinas, celebrity or not, who deserve the attention of televiewers. Aside from hosting and interviewing the subjects, the former beauty queen will also help the staff of the show in research and pre-production.

What prompted Aga Muhlach's wife to do this show?

"One of the reasons that made me say ‘Yes' was the concept of the show,' answered Charlene during the press conference of Proudly Filipina last Wednesday, February 20, at the Dusit Hotel Nikko in Makati City.

She added, "Bihira talaga ang mga ganitong klaseng shows, di ba? And one of the main objectives of QTV is they want that ‘pay it forward' effect. You could inspire, change somebody's life, and be optimistic is definitely a big reason why I said, ‘Yes.' It made everything so much easier."

Gigi Santiago-Lara, assistant vice president for Alternative Productions, explained why they chose this advocacy for QTV-11. She said, "We did a survey and tiningnan namin kung yung mga tao ay makaka-relate dun sa idea na ‘Yes to Positivity.' And we found out na naka-relate sila and they believed it, they feel it's relevant to their lives. They felt, yung mga respondents, that we spoke to [them], they felt na it's important to them.

"That's one of the reasons why we put up shows like Proudly Filipina. It's to affirm, di ba, na positive thinking is really... parang it's gonna change the world. That's what we want to advocate. Also, parang naka-relate din sila sa life is beautiful. All these ideas are in tune talaga with what QTV wants in our shows."

NEW HOST, NEW CONCEPT. With the arrival of a new host, a new concept was also implemented in Proudly Filipina. In the previous edition, the show only featured prominent Filipinas like Marian Rivera, KC Concepcion, and the Filipina mountaineers who reached the summit of Mt. Everest, among others. Now, Proudly Filipina allows the viewers to nominate their own "proud Filipina."

This was another reason that prompted Charlene to accept being the host of Proudly Filipina. "They will be adding new segments sa show, where everyone will be able to get the chance to nominate their Filipina who they are most proud of," she explained. "So, that's a nice touch to that."

She continued: "It will be more interactive with the viewers because they will be able to contribute what they want to see on the show. And, of course, the other inspiring stories of other Filipina and successful woman of the country will be there."

"The very essence of this is the ‘pay it forward' effect. We would like to encourage that element by recognizing one story of a woman that inspires one person, it may inspire more other people."

Each week, a nominated Filipina will be chosen from the text messages and e-mails sent to Proudly Filipina. Esguerra assured the press that this process of nomination will not be used by people who have a hidden agenda for nominating a person, especially for those with political ambitions.

He said their production team will choose the deserving nominees while their research team cross-checks and validates the stories.

Esguerra added, "GMA-7 and QTV-11 have always been very fair and very objective in presenting whoever is best to be recognized and best to be acknowledged. Never have we been known to be an instrument of abuse or whatever political ends. So, that will never happen.

"We also believe that every Filipina has a very inspiring story to tell. And the program in itself does not discriminate, we only recognize things that brings out the best in each and everyone of us as Filipino."

PROUDLY CHARLENE. During the press conference, Charlene was asked who she would nominate as her proud Filipina.

"I would say that it's my mom," replied Charlene. "Growing up, it's a known fact that she has raised me and my brother [Richard Bonnin] single-handedly, a mom and a father to me and my brother.

"I think that in itself is a big accomplishment. Kahit papaano she was very strict. At a time, hindi ko maintindihan but now I do. She raised us with good values, with principles, and great humility. She's my proud Filipina."

She also mentioned the name of her husband's mother, Anita Muhlach, and his manager, Manay Ethel Ramos.

Lastly, Charlene was asked about the proudest moment in her life. The TV host answered as if she were answering a beauty pageant question. "I think one of them would definitely be being a wife to my husband and, of course, having gracious and wonderful kids. I think for all women, that's one of their most proudest moments or one of the dreams that we all look forward to have—a nice family and wonderful kids.

"Aside from that, I'm proud of the fact that I was given the opportunity to work with QTV. It's such a positive network. It's very inspiring, not only for myself but for every woman."


Future episodes of Proudly Filipina include the inspiring stories of trailblazing doctor and inventor of the incubator, Dr. Fe del Mundo; the dedicated teachers of Sindangan Elementary School in Northern Leyte who have made their school the country's best despite all the odds; award-winning actress and now Batangas governor Vilma Santos; the women doctors to the barrios; and the female lawyers of the Public Attorneys Office, among others.

Proudly Filipina airs every Friday at 7 p.m. on QTV-11.