Widows' Web: Anatomy of a Suspenserye 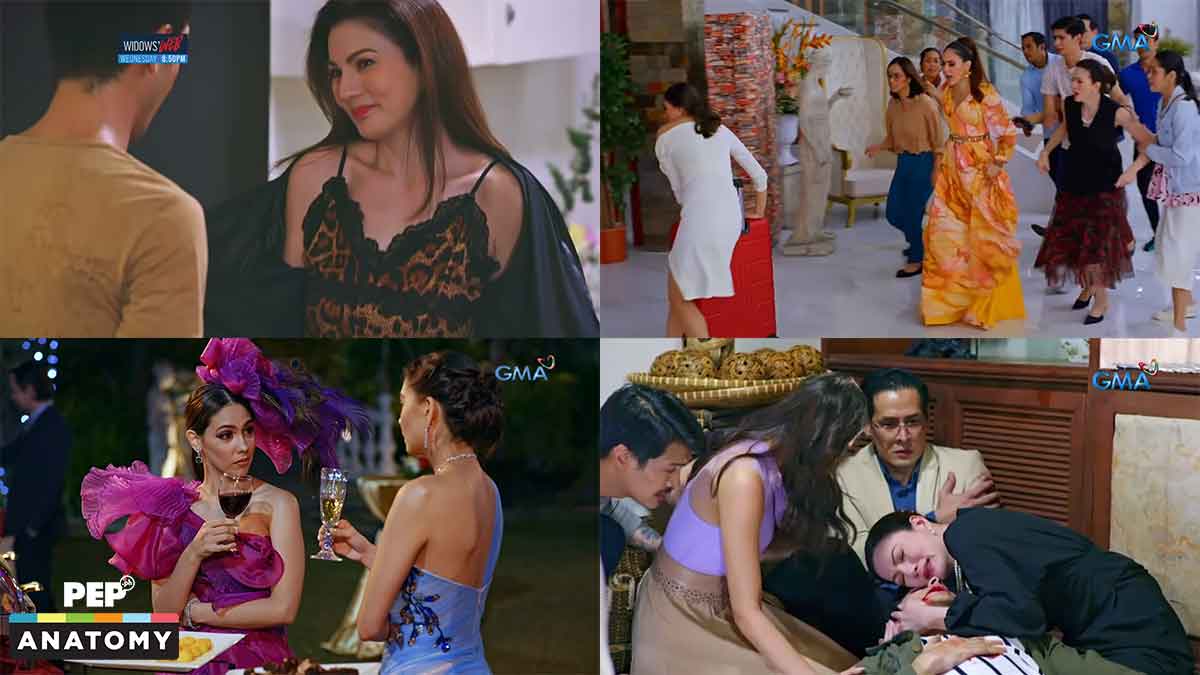 As GMA-7's prime-time series Widows' Web comes to a close, here are some of the important facts and trivia behind the making of the network’s first suspenserye. Widows' Web is headlined by Carmina Villarroel, Ashley Ortega, Pauline Mendoza, and Vaness del Moral.
PHOTO/S: Widows' Web (GMA-7)

In 2022, GMA-7 introduced its viewers to a new genre called the "suspenserye."

It is the best way to describe their prime-time teleserye Widows' Web, a whodunit crime drama wherein four women are caught in a web of lies as they discover the truth behind the death of an influential man.

It tells the story of Elaine (Pauline), a simple woman who enters the world of the rich as she investigates the truth behind the death of Alexander Sagrado III (Ryan Eigenmann), an influential man known as AS3.

Elaine’s only goal is to find the killer so that her boyfriend, Frank (Edgar Allan Guzman), would be acquitted for the crime that he did not commit.

In the midst of her investigation, Elaine crosses paths with the three women in AS3’s life: his sister Barbara (Carmina), his wife Jackie (Ashley), and Hillary (Vaness), Jackie’s friend who also has a connection with him.

Widows’ Web, which premiered on February 28, 2022, is down to its last few episodes after nine weeks of airing.

Every episode is filled with suspense as viewers are left guessing and coming up with their own theories behind the death of AS3 and his killer.

Although the whodunit genre is not new to Pinoys, GMA-7 made an effort to raise the bar higher for the show to be called the first suspenserye of the Kapuso network. 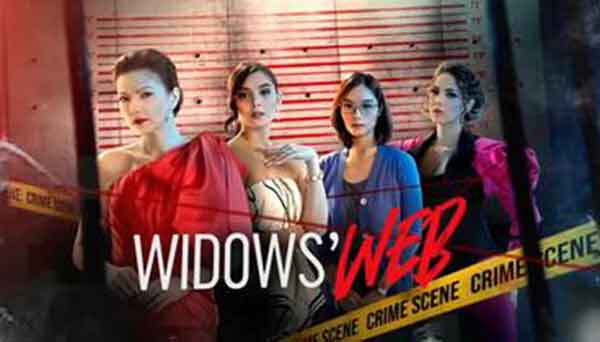 As the series comes to a close, PEP.ph (Philippine Entertainment Portal) sits down with the show's producers and creators for an exclusive interview where they share important facts and trivia behind the making of the network’s first suspenserye.

1. Creative development for Widows’ Web was two years in the making.

While writers are usually given parameters to develop a show, this was not the case for Widows' Web. As the writers were given free rein, the show's creative development actually took at least two years.

He and Ken then developed the concept to be pitched to the bosses.

He continues, “It took us a year to develop it because of the pandemic. Natatandaan ko, we pitched it sa taas, sa mga bosses, February of 2021.

According to Ken, what really took them long in the concept development stage was the characterization of the four lead characters.

Ken explains, “Kasi one of the main ingredients of this show is the four women na hindi pwedeng yung dalawa lang ang bida ‘tapos yung dalawa, side character. It really took us time to develop each of their character map, gawin silang iba-iba.

Aside from that, the creative team also made sure that all their characters are nuanced and complex.

Ken continues, “All of them are flawed, kahit yung masasama ay mabubuti.

“In a way, that’s a bit difficult. But with the help of the creative and production team, we were able to create very human characters.

“I think we were able to achieve that based on the feedback of the audience na may Team Jackie, may Team Barbara, may Team Hillary, and then there were those who were rooting for Team Laylayan or si Elaine.” 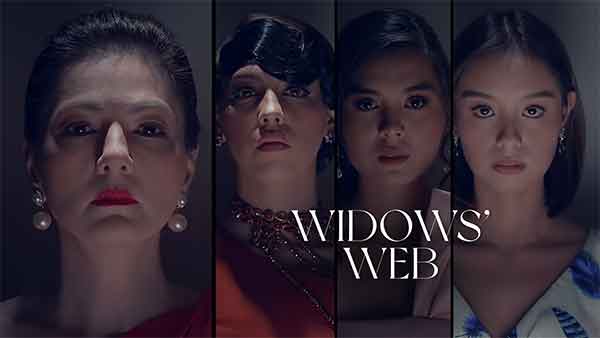 2. Casting trivia: Producers had to ask permission to include Carmina Villarroel in the show; Ashley Ortega was supposed to play Elaine

Netizens have been praising the four lead actresses of Widows' Web as they fit the characters they are playing.

Carmina Villarroel plays Barbara Sagrado-Dee, the elder sister of AS3 who was extremely disappointed after he did not give her a position in the Sagrado Group of Companies. She is later found to be in a relationship with George (Mike Agassi), a younger man who happens to be the sports coach of her son, Jed (Anjay Anson). 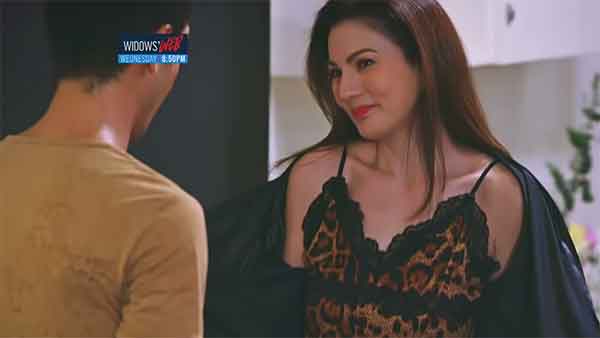 Read: What made Carmina Villarroel do "kerengkeng" scene with Mike Agassi in Widows' Web?

Ashley Ortega is Jackie Antonio-Sagrado, the wife of AS3 whom he manipulates for a long time. Jackie is later revealed to be an ex-prostitute who was in a relationship with AS3’s illegitimate brother, Vladimir (Adrian Alandy).

Vaness del Moral plays Hillary Suarez, Jackie’s best friend who is married to AS3’s best friend, William (Bernard Palanca). Apparently, Hillary had an affair with AS3 and is even pregnant with their baby.

Finally, Pauline Mendoza is Elaine, a simple girl who is thrust into the world of the wealthy when she decides to investigate the truth behind the murder of AS3 and clear the name of her fiancé, Frank (Edgar Allan Guzman).

According to Helen Sese, the group really brainstormed together to fill the roles of the four women.

“’Tapos siyempre for approval ng top management. Gladly, we were approved to have this cast with us.”

But if top management did not approve of the casting, Carmina would have not joined the show! 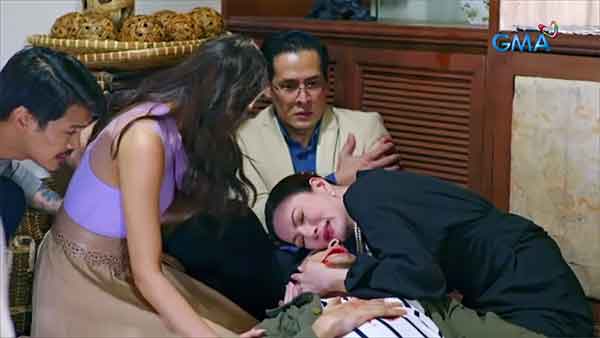 A new casting protocol in GMA-7 says that producers can only cast an actor two months after his or her existing show has ended, since shows are now canned before they get aired on TV.

As for Ashley, Widows’ Web is her big break after viewers noticed her acting abilities in Legal Wives. 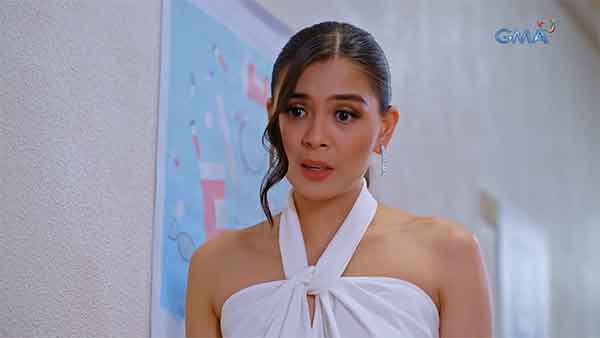 In a PEP Live guesting with Pauline, Ashley revealed that she was originally offered to play Elaine, but was eventually given the role of Jackie instead. 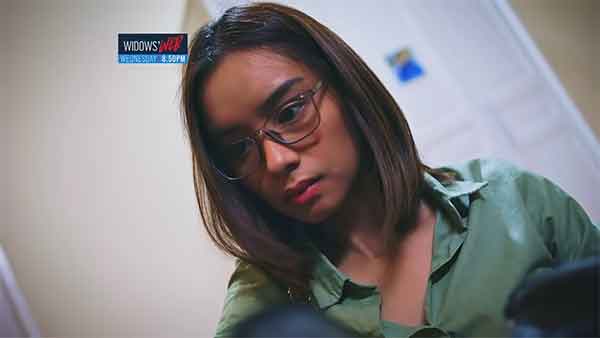 As for Hillary, Helen says that Vaness has been a “reliable actress ever since.”

But since she is portraying an off-beat character, who was inspired by Tessa Prieto-Valdes, they were also a little worried if Vaness could pull it off. 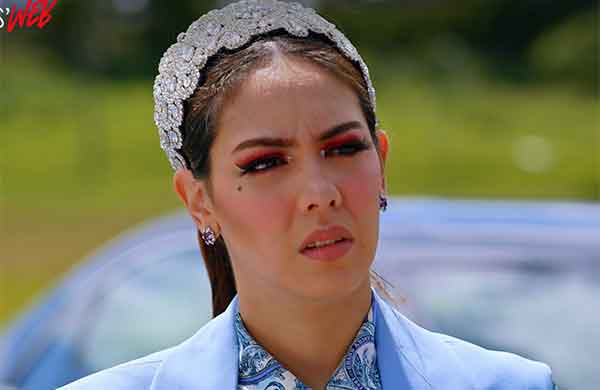 RJ, being only focused on the scripting for the show while it is being produced, is all praises for the cast.

The character of Alexander Sagrado III or AS3, portrayed by Ryan Eigenmann, only makes a brief appearance in the show. However, his character is as important as the other stars.

After all, the story revolves around his death and how his secrets will slowly unravel throughout the show. 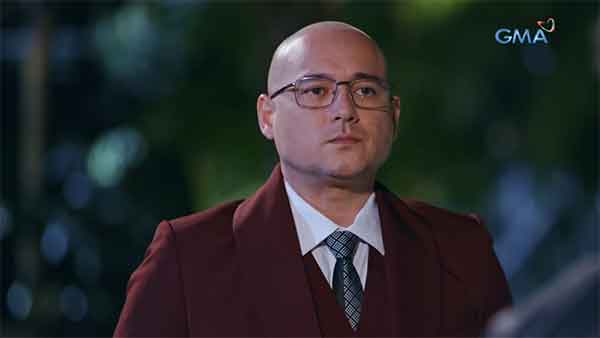 This is why the creative team really took the time to research different powerful men to create the perfect AS3.

“Little by little, we created our own version of AS3, a powerful, manipulative man na hindi downright… na hindi malakas magsalita or very harsh.

“Medyo malumanay nga nang kaunti si Ryan when he talks or when he makes demands.

“So, parang we took inspiration from the people we know or we see on the news."

RJ says that until the end of the show, viewers still have to watch for AS3. 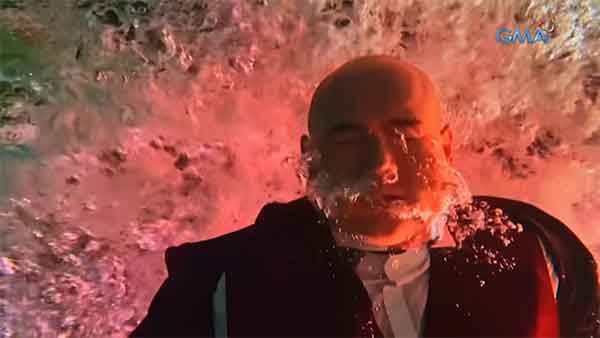 4. The production gave importance to the look and styling of the characters.

Hillary is indeed one of the show's scene-stealers.

Among the four women, Hillary is the nouveau-riche type of woman who always wears extravagant dresses and hairpieces and does exaggerated actions.

This is why viewers are so entertained by her.

Of course, it is the portrayal of Vaness that makes it all effective. 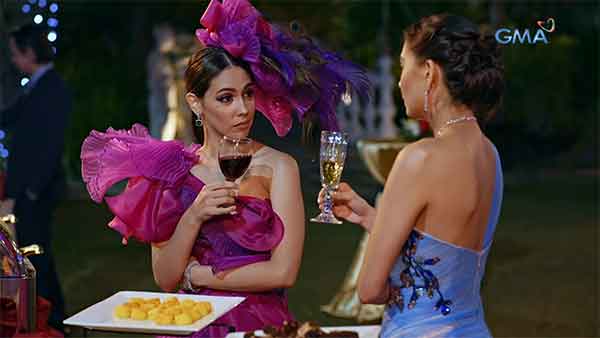 When it comes to styling, Direk Jerry Lopez Sineneng and Kaye really made sure to pay attention to the clothes of the entire cast, at least for the first two weeks.

But thankfully, the stylists are also meticulous to follow the show’s continuity, especially since scenes for the show were not taped in chronological order.

“Pati wardrobe team namin, tutok na tutok. Ano siya, it’s a product of hard work and I personally would like to commend them, napakahusay.” 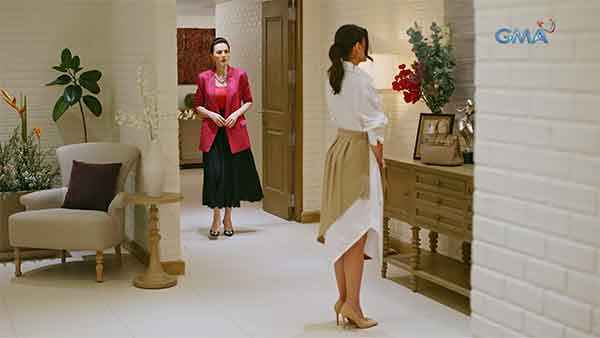 It was actually RJ’s request to the production to have this set of clothes for the characters’ look.

He is happy that the production team delivered.

Helen adds, “Siyempre, we’re thankful sa management kasi the budget that we need was provided for us to have this output. 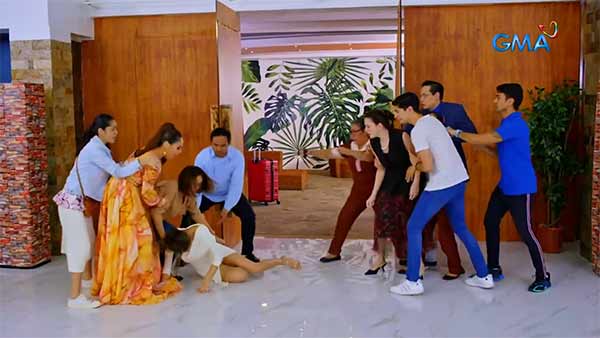 5. The Sagrado mansion was shot in five different hotels!

Kaye, who has worked as an executive producer for many years now, admits about Widows’ Web: “Ito yung pinakamahirap kong show!”

Since Widows’ Web revolves around the world of high society, the producers have to make sure that viewers will be convinced that this family is really rich. 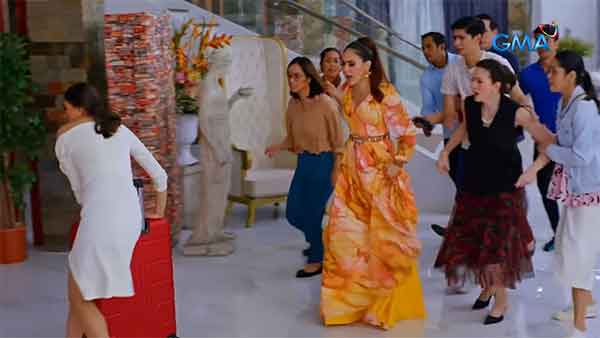 One episode mentioned that the Sagrado mansion had a west wing and an east wing.

The producers had to surmount a huge logistical challenge to pull this off. 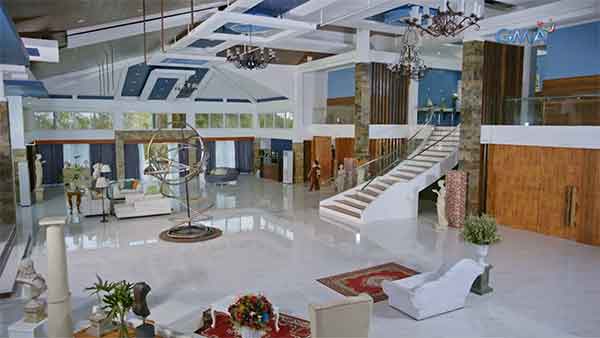 This is why Helen was happy when a clip of Delia (Mosang) and Rose (Karenina Haniel) explaining the east wing and west wing of the house went viral online.

Aside from the “yaman” details, Direk Jerry openly says that he really pays much attention to detail, even the smallest of things.

“Iyon talaga yung ugali ko mula noong una akong nagdi-direktor. I just want everything to be right, to be correct before I take a scene.”

RJ, as a writer, appreciates how the production gave importance to the grand details that were written in the script. 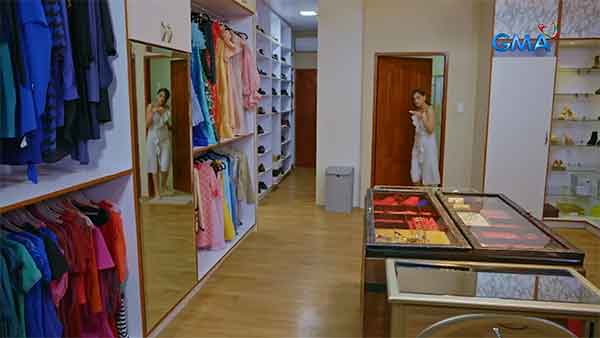 As for Direk Jerry, he also did some experiments for his first Kapuso project. 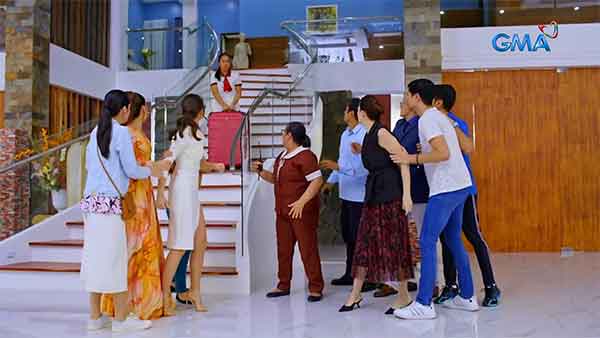 6. The origin behind the term Suspenserye.

RJ admits there was a little confusion the first time GMA-7 introduced Widows’ Web as a suspenserye.

After all, this was actually not the first time GMA-7 did a show of this kind.

The series was also a whodunit drama wherein sisters Sunshine and Jean were trying to find out who killed their youngest sister, played by Jennylyn. 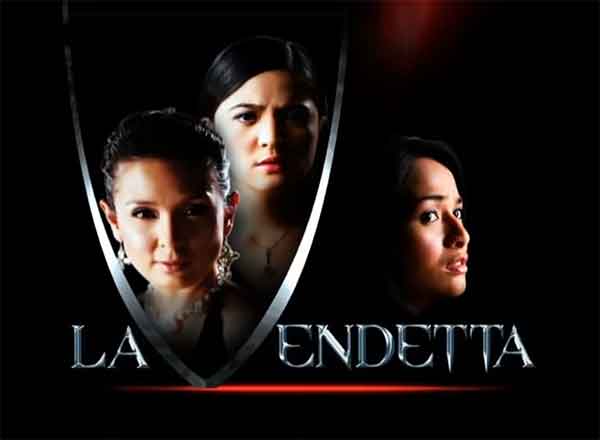 But La Vendetta’s plot had another aspect: Jennylyn’s character appeared as a ghost and haunted everyone until they found out who killed her.

This plotline is absent in Widows’ Web.

Although it was introduced as a suspense-drama series at that time, the term “suspenserye” had not been coined.

This is why some viewers got confused as to why Widows’ Web was tagged as the “First Suspenserye ng GMA.”

According to Helen, it was actually the PSD group or the department that does the show plugs and trailers who coined the term suspenserye.

RJ is happy that the term helped in amplifying the popularity of the series.

But because the genre now has a specific name, does this mean that GMA-7 will create more suspenseryes in the future?

Helen answers, “Yes, we will explore that.” 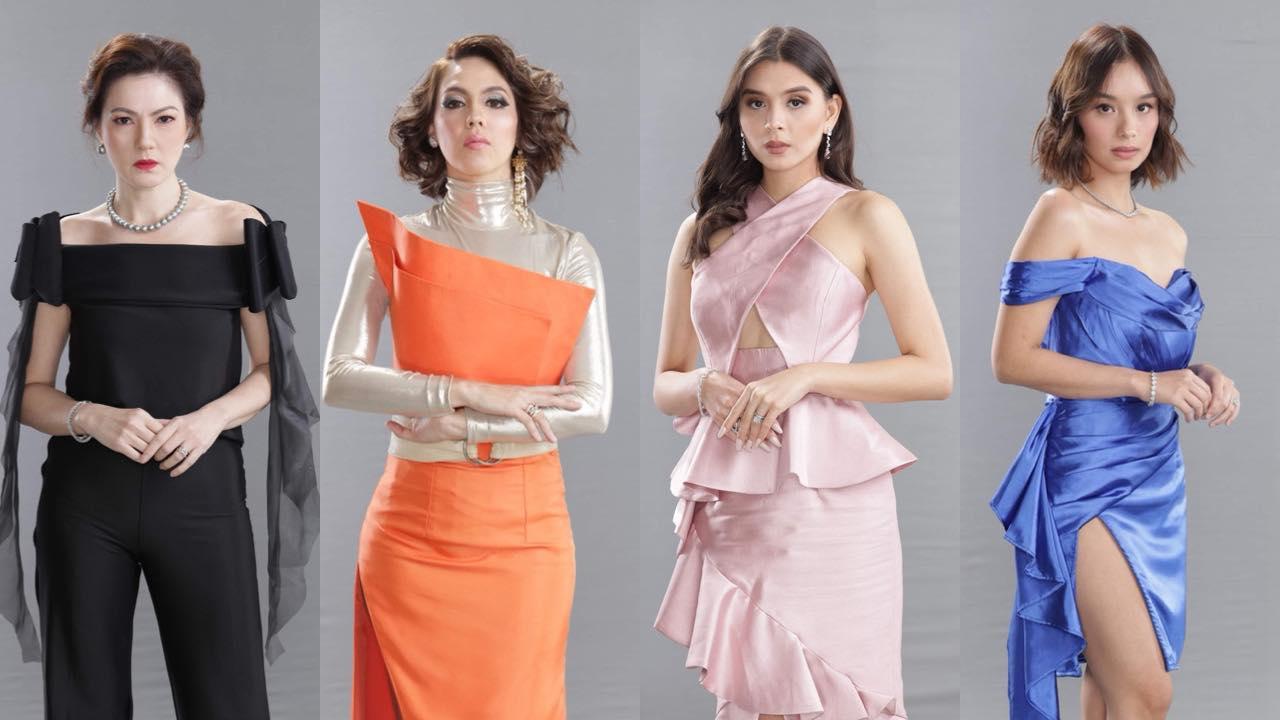