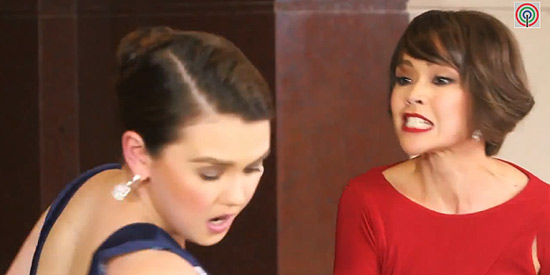 Pangako Sa 'Yo stars Angelica Panganiban and Jodi Sta. Maria slapped each other for real while doing ABS-CBN's remake.

Pangako Sa 'Yo stars Angelica Panganiban and Jodi Sta. Maria made it a point to make their slapping scenes as real as possible to avoid doing them again for the cameras.

They are co-stars of Daniel Padilla and Kathryn Bernardo in ABS-CBN's remake of the iconic teleserye originally topbilled by Jericho Rosales and Kristine Hermosa.

Angelica is cast as Claudia Buenavista while Jodi is tapped to play Amor Powers.

In the original soap, Jean Garcia was cast as Claudia while Eula Valdes played Amor Powers.

When the teaser came out, viewers got to see the striking slapping scene between Angelica and Jodi as they brought life to the roles of their predecessors.

For two years, Jodi was associated with the bubbly character of Maya in the now defunct daytime teleserye Be Careful With My Heart.

How does she feel about being tapped for a kontrabida role this time?

Did both actresses agree that they will not be “pikon” or take it personally?