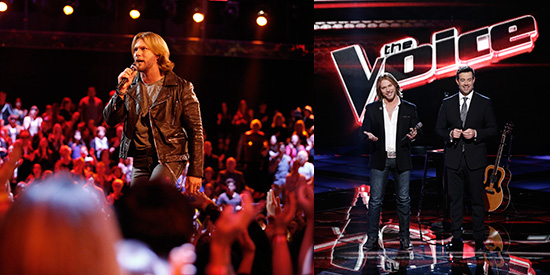 The name Craig Wayne Boyd is familiar to those who followed his journey on the 7th season of The Voice where he emerged as the winner. Part of Team Blake Shelton, the country singer weathered several near eliminations before being declared the champion.

It’s been a few months since the momentous conclusion of The Voice but the reality of it all has yet to sink in.

In a phone interview with PEP (Philippine Entertainment Portal), the American singer-songwriter recalls this life-changing experience by saying, “It feels exactly how it did previously: I can't believe it. It's been quite the whirlwind ever since. I really haven't had the time to process that I've won the show.”

Craig calls his best experiences after The Voice as his #holywow moments. He’s played at the Grand Oly Opry, performed at the Roosevelt Tavern, and was part of the Alpine World Ski Championship in Vail Colorado, which was a huge deal for him.

“I found out that when I sang the national anthem that there were 78 different countries across the world that were watching me do that. And that, to me, was a highlight, to be able to reach globally.”

He’s currently in Las Vegas at the Hard Rock Hotel and Casino opening for Rascal Flatts.

How has his success has affected him?

“So far as a person, I don't think that it has really changed me much. I hope that people feel like I'm one of those guys that what they see, is what they get.”

He’s modest in how he thinks of himself. “I couldn't call myself a country music icon yet but I will continue to work as hard as I can to build that brand.”

Craig is a very down-to-earth person. He worked for years in the music business before striking gold. He admitted to almost quitting the entertainment industry once before but he still has no regrets or wouldn’t change anything in his road to stardom.

He feels that “Life is all these puzzle pieces that make us up. For some strange reason, whatever that means, I had not the opportunity at success previous. Maybe I wasn't ready mentally or vocally but now that I have the opportunity, I want to take full advantage of it.”

With his busy schedule, Craig tries to find ways to unwind by using social media.

“I love to get on there and chat with fans and friends that way,”

He relates that: “Some of the things that fans will say are humorous. There's a lot of folks that want to be my mom. They give me advice. It's pretty crazy.”

He includes riding BMX and fishing as his pastimes but always goes back to his true passion.

“I spent most of my life I playing musical instruments and I didn't really play sports or anything. It was always music.”

He counts his two-year-old son Jaxon as his inspiration. “I'm doing this because I want to make a better life for my son. To me, he's the most important.”

Craig’s advice to budding hopefuls would be not to give up.

The new batch of aspiring singers is currently being honed through The Voice Season 8 airing on Tuesday and Wednesday at 7:50pm, within 12 hours of U.S. telecast first and exclusively on AXN.

“I feel like it's important to go out there and work on your own and hone your craft to the best of your ability because I think hard work will pay off.”

He mentions there will be difficult times. “Look at the positive side of things. Even though I was going through something that was hard, I was always trying to find the positive out of it and understand that those moments are there to teach you lessons.”

He depicts his mindset in a piece included in an upcoming album of his. “I had opportunity to write a song on the last week of the show and it really meant a lot to me. It was a song that kinda talked about and expressed my experiences, not only on the show, but in my career period. It's called 'I'm Still Here' and it's about not giving up on your dreams and doing whatever it takes to make that happen.”

Craig expressed his gratitude to his fans who believed in him with enthusiasm. “Thank you, thank you, thank you! It's overwhelming, the love and support that has been shown, especially from the foreign countries. I just never, never thought that I would be able to touch that many people. It's definitely been a blessing and an honor and I will not take that lightly. I do hope to make it over into all the different countries and perform for them in person.”


As for visiting the Philippines, Craig is receiving “offers come in to visit other countries and perform. I've gotten my passport so I can do that just. I hope that comes sooner rather than later.