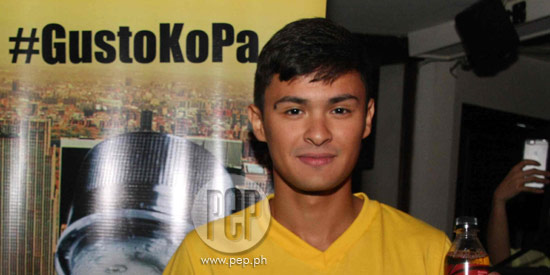 Matteo Guidicelli will get to share his passion for cars when he hosts Wheels TV.

The ABS-CBN actor presented to a select group of press at the Buddha Bar last March 17. The show, which will air its pilot episode this Saturday (March 21) on ABS-CBN's Sports + Action Channel, will last 30 minutes and will tackle everything automobile-related.

Wheels TV paves new ground as it takes the popular motoring section of the Philippine Star, released twice a month, into a TV show aired once a week for 13 weeks.

We clarify if they'll tackle tips on how to ease through traffic and he said yes to this. "Traffic? Mayroon din. And we also have different car experts kumbaga, different car writers will be discussing more about different kinds of vehicles and all that stuff."

These car experts who will be part of the show are The Star's motoring journalists, Manny de los Reyes, Kap Maceda Aguila, Atty. Karen Jimeno and Ulysses Ang.

Matteo adds, "I do have a co-host, Angela Rivero."

The former kart racer describes the hosting experience as "super fun.” For the pilot episode, Matteo describes trying the Ford Ranger and how he turned off the traction control and was able to bring it everywhere.

Matteo is looking forward to Wheels TV highlighting "real-life situations, there's nothing fake about it. We're not gonna make anything sound good all the time, it's gonna be real."

The TV host-actor admits he had no second thoughts about accepting this project.

Just like that, Matteo sealed the deal and as the show airs this weekend, he hopes it does well.

FIRST CHOICE. Lucien Dytioco, Philippine Star SVP for Sales and Marketing, reveals that he was their first pick for Wheels TV. "Our top of mind was really Matteo."

He confesses, "because we've scoured several celebrities, probably someone who is credible, we were looking for someone whose personality is credible, who could really talk about cars and motoring and there's only one, it's only Matteo."

Now that Wheels TV is adding the television component, do they plan to feature celebrity guests, especially those associated with car brands like Anne Curtis-Smith for Audi and Georgina Wilson for Jaguar?

Wheels TV is set to air its first season from March 21 up to June 2015. And Lucien says, "After that it's already continuous."

He also explains how the digital component will come into play, "the way we craft the content is that the content we develop on TV is covered by print, and in between its digital who helps it explode. That's primarily what we're trying to do even if TV first, it's still providing that newspaper experience in whatever platform that we apply."

Wheels TV will be available through all Philstar digital platforms like its official website, the digital edition, and the mobile app.

Lucien remarks, "it's really just an avenue for us to really make the market take a look at The Star, and engage through the newspaper. One feature that we're doing that's unique in this model is we have an augmented reality app with it so when you get to read the paper, you get to see the segment through the smartphone again."

Like Matteo, we want to know how the head honcho of Philstar sees Topgear.com.ph in all this print to TV with digital conversion and he shares, "I believe that every media entity has their strength, so yes, they are strong and we are friends with them and in the same manner we are trying to develop that so we would have our own strength, and having a newspaper and TV experience is something that Wheels TV can boast of."

Here are certain aspects of the show to watch for as it premieres on March 21: tips on improving fuel efficiency, circuit training for car control and car racing, road trips across the Philippines and tips to maximize the road trip, what do when stuck in traffic, and other road rules and safety tips.

We ask Matteo if he's keeping any host peg in mind as he does this show and he shares, "I don't know yet, we just shot…like a teaser thing, so I don't know, we'll see when the show starts going on."

Of course, in the Philippines especially, one can't talk about cars and motoring without mentioning the words Top Gear (both print and digital). Matteo remarks, "Everybody knows Top Gear you know, it's like the number one thing you know. It's a high budget TV show around the world, so we're gonna try our best to make Wheels TV like the number one in the Philippines naman and make it as legit as we can."