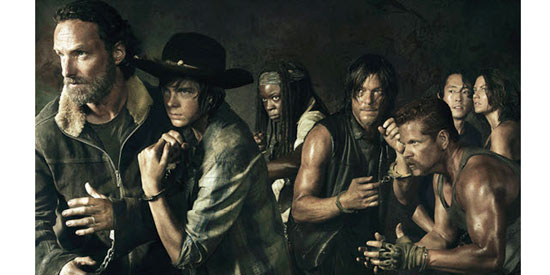 The Walking Dead is a zombie-pocalypse sci-fi series that has introduced characters with compelling backstories that make you care whether or not they live or die. What lessons can Pinoy teleserye makers learn from this Hollywood series? PEPsters, share your thoughts in the comments section below.

Philippine teleseryes are all about heavy drama and crying marathons while the Hollywood TV series The Walking Dead is a post-apocalyptic zombie series.

So humor us a bit here. The Walking Dead produced characters that we’ve grown to understand, love, resent, and care about – something that is quite rare now in local primetime TV.

Mainstream entertainment today is driven by the audience’s need for immediate escapism, and you cannot go any more escapist than a group of survivors in a city infested by flesh-eating corpses. Still, the American TV show ultimately makes The Walking Dead work both on entertaining and intellectual levels.

So despite the clear thematic differences, the local TV market can still learn from The Walking Dead’s ingenious handling of its material and subject matter; which is, to say the least, a whole lot better than most.


Here are the five things Pinoy telenovelas can learn from The Walking Dead:


1. The power of songs in storytelling

The rewarding yet underused coupling of film and song has been one of the hallmarks of numerous AMC shows (Breaking Bad, Mad Men) and it has made tremendous impact on the cinematic storytelling of each episode. The Walking Dead utilizes this device with staggering emotional pull on the audience.

One fine example is “Internment” (Season 4, episode 5). Hershel’s deep sorrow and hopelessness as he tends to the sick inside the prison is solemnly echoed by Ben Howard’s “Oats in the Water”. The harrowing acoustics and Howard’s cold, downbeat crooning rhyme seamlessly with the gloom sifting through the unspoken drama lingering inside the prison cells.

See also “Forget” (Season 5, episode 13). Rick’s stroll around the peaceful Alexandria Safe Zone gets interrupted by a lone walker banging on the other side of the walls. The scene slowly detonates with powerful symbolism as The Bee Gees’ 1966 classic “Spicks and Specks” ricochet the words “the sun in my life/ it is dead / it is dead”. The song’s ironic combination of an upbeat tempo and sad lyricism magnificently sends the message across– that happiness will always be unfounded in a world bound for doom.

We rarely (or maybe even never) see this device utilized in local telenovelas. Songs are used as mere accessories, and sometimes even as the show’s title; and yet none of these soap operas ever really make the most out of them.

2. Protagonists can be flawed, even evil.

The Walking Dead is known to portray the murkiest aspects of humanity as they ooze out of every character – heroes and villains alike. It’s a Darwinian world of zombies and survivalists of all kinds, and the line between moral vagueness and downright villainy shifts constantly; forcing protagonists to desperate corners.

Upon reaching the second half of season 5, Rick’s group has battled numerous oppositions across Atlanta – from Woodbury to Terminus to Grady Memorial. By the time they reached Alexandria Safe Zone, audiences were introduced to new villains: Rick and his group. Alexandria is a safe, discreet haven and the heroes are bringing with them all the cynicism and hate they’ve carried along in their travels. They’re so evil and scheming now that they are bordering on hostile.

This utter courage by the writers to flesh out a whole new facet of the “good guys” not only intrigues the viewer, but also establishes a sensible path for the storyline. It simply makes sense for them to be like that. In local shows, the good guys are so static and flatly written that they start and finish the entire show’s length without exemplifying any sort of dimension.

3. Antagonists can still be human

Remember The Governor – the one-eyed terror of Woodbury? Or Daryl’s unstable redneck brother Merle? One could easily find these characters villainous and yet the disdain for them is not without empathy.

The worst thing about antagonists in local telenovelasis that they are based on stereotypes: bearded, leather jacket-wearing nimrods that operate mostly on cheesy Tagalog lines. Or they are rich millionaire tycoons (still with the beard) or curt hacienderas with expertly sculpted eyebrows who would let out an evil laugh right after they announce their evil plan to the entire world.

What The Walking Dead did right with its villains is that it fastened them with rich back-stories; providing us a glimpse of their humanity – and how they came to be. Making the villains as such further establishes the ethos of the show; that if you thrust humans in extraordinary circumstances, it can breed monsters out of them – and yet monsters that we can still relate to.

Remember when Rick Grimes was a prudent, morally firm ex-cop who would always find the best solution for everyone involved? Well, as of season 5 that same Rick Grimes has killed his own best friend, hacked a convict with a machete to the head, killed a redneck with his bare teeth, and committed horrendous acts that would put Hannibal Lecter on notice.

Rick’s descent into madness is rooted on desperation, paranoia, and despair. Perhaps next only to Breaking Bad’s Walter White, no other TV character today has epitomized the term “character growth” more intricately than the roughened up, Atlanta-based ex-cop. From the very first time we see Rick draw his gun to the very last image of him screaming with blood on his face, we bare-witness in pure form how the textbook conflict “man vs. nature” (zombies being “nature”) bleakly develops to “man vs. man” – journeying towards “man vs. himself”.

The continuum of The Walking Dead’s exploration of man’s evolution in a rapidly changing world is steady and methodical – with occasional bursts of well-orchestrated detonations. We can learn a whole lot even from the show’s weakest episodes.

The most striking difference between the two is definitely the way they treat production. Local TV series shoot almost on a weekly basis, as they need to present episodes on a daily. Story writers come up with new plot twists and storylines every week as well, which is sort of a roadkill, creativity-wise. This pushes the crew and the actors to work overtime, even for days on end. The mental exhaustion and fatigue settle in and the creativity, value, and quality of the product ultimately suffers. The need to show something to the crowd far outweighs the need to create something that can really resonate.

The Walking Dead, as per most of the foreign shows running today, works on a “seasons” format. This allows the entire crew enough time to go over the creative process, plan the path of the series, shoot the episodes with ease, and market the product as the premiere approaches. Not only does this allow the creators freedom and convenience to explore the depths of the material, but also builds a strong sense of anticipation from the fans. For local studios to adapt this format is a huge stretch, as mainstream viewers are already used to seeing their shows on a daily basis. But for the truly dedicated artist and entertainer, this transition can bring forth a breath of fresh (and even better) air.

What lessons can Pinoy teleserye makers learn from Hollywood series The Walking Dead? PEPsters, share your thoughts in the comments section below.