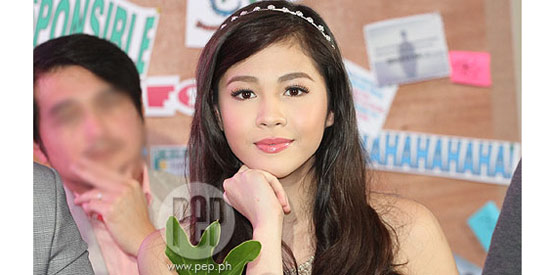 Oh My G! starJanella Salvador feels elated everytime she is reminded that she was given already her first lead role after being in the business for just two years.

She was first introduced as Nikki in the hit daytime teleserye Be Careful With My Heart.

In an exclusive interview with PEP.ph (Philippine Entertainment Portal) during her birthday celebration-slash-grand fans’ day, she said that she feels blessed upon being chosen to star this show.

"I feel very blessed kasi parang first of all, they gave me a teleserye, my own, after Be Carefuland it’s my first show.

"Tapos, second, it’s not just any other teleserye, it has meaning e, may purpose siya, it’s about God and I’m happy to be an example to the teens."

Oh My G! talks about a teen named Sophie who questioned God and His existence after experiencing a series of tragic events like the loss of her parents.

How similar or how different is she compared to the role she is portraying on TV?

She also recalls that there was one scene wherein she had a hard time shooting with. The script entails her to throw a comic punchline.

"Sobrang that was the most embarrassing scene ever kasi hindi ako marunong mag-baklaan.

WORKING WITH VETERAN STARS.Janella also shared that she was starstruck when she first worked with her co-star Janice de Belen.

"Honestly, at first, na-starstruck ako when I first worked with her.

She also discloses that she also has a good working relationship with her other senior co-stars Sunshine Cruz and Dominic Ochoa.

Also, she affirms that she has found the same family with a good working environment in this show, like in Be Careful With My Heart. But does she miss her co-stars in the two-year show?

"Of course, I super miss them all. Eto nga si Jerome [Ponce, who was present at the fans’ day], ‘andito.

All her other co-stars in Be Careful are already working on new shows. Jerome is in the afternoon show Nasaan Ka Nang KailanganKita,Jodi Sta. Maria will be part of the remake of Pangako Sa ‘Yoand Richard Yap will be paired with Judy Ann Santos in Someone to Watch Over Me.

NO KISSING SCENE YET. Janella, who just turned 17 last March 30, said that she is not yet open to shooting for kissing scenes. "As much as possible, ayoko sana."

She is also mum when it comes to courtship. She said that she has suitors, but she wants to focus on her career first.

Is one of those suitors her Oh My G! loveteamMarloMortel?

FUTURE PROJECTS. Aside from starring in ABS-CBN's daytime teleserye, Janella will be busy towards the end of the year as she prepares for a concert and a movie.

When asked if she will be also releasing an album, she answers with a smile: "It’s in the works."