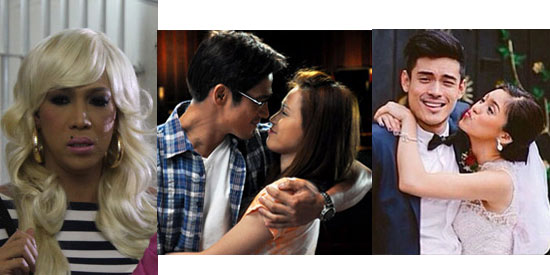 According to ABS-CBN, the Star Cinema films (L-R) Girl, Boy, Bakla, Tomboy; Bride for Rent; and Starting Over Again have generated more than a billion pesos in ticket sales.

“We are pleased with our overall performance for 2014,” said Aldrin M. Cerrado, the company’s Chief Financial Officer. “I am happy that our TV and Studio businesses continue to turn in strong results. In addition, we are already beginning to reap the rewards from our cost management initiatives. Production costs fell by 4.3% compared to 2013.”

“ABS-CBN has further solidified its leadership in terms of national total day audience share, which jumped from 42% in 2013 to 44% in 2014,” he added.

Star Cinema’s movies have performed extremely well at the local and international box office in 2014. Girl, Boy, Bakla, Tomboy, Bride for Rent, and Starting Over Again generated more than a billion pesos in ticket sales.

One of the company’s key initiatives, ABS-CBNmobile, has continued to increase its subscriber base, ending the year with over 1.5 million subscribers. Beyond traditional voice and text services, ABS-CBNmobile allows users to watch ABS-CBN programs on their smartphones through iWantTV.

Ron Valdueza, ABS-CBN Group CFO stated: “I am confident that our company will deliver even stronger results this year. I am particularly excited about the prospects for our digital TV initiative – we already have over 200,000 ABS-CBN TVplus boxes in the market and should hit our initial target of one million set-up boxes by year-end.”

“Our O Shopping channel was profitable last year – its first full year of operations – while our educational theme park at the Fort Bonifacio Global City, KidZania, is expected to open for business this year,” added Mr. Valdueza.

According to Kantar Media, the top ten programs for 2014 for free-to-air television were all produced by ABS-CBN. The company intends to further boost its audience share once it improves the reception of channel 2 in the Mega Manila area and Central Luzon through the distribution of its TVplus boxes.

Various brokerage firms, including Deutsche Regis, Credit Lyonnais, Abacus, Maybank ATR Kim Eng and COL Financial have included ABS-CBN in their research coverage and are positive about the company’s future prospects. COL Financial, in its March 2015 report has a target share price for ABS-CBN of P75.