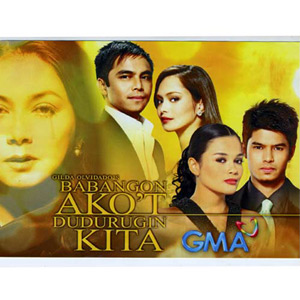 Gilda Olvidado's Babangon Ako't Dudurugin Kita is populated by sinister gangsters who want to exact revenge on those who caused their misery in the past. These include the characters of (from left) Dina Bonnevie, Marvin Agustin, Angelika dela Cruz, Yasmien Kurdi, and JC de Vera.

This March, prepare to be immersed in a world full of treachery, connivance, and vengeance. See how wealth and power can ruin a society as GMA-7 brings to life the TV serialization of one of the most compelling Filipino films—Gilda Olvidado's Babangon Ako't Dudurugin Kita.

Starting March 24, Babangon Ako't Dudurugin Kita is the newest addition to GMA-7's Telebabad Block. It's a story filled with people whose hunger for power drives them to connive and betray their loved ones. Babangon Ako't Dudurugin Kita is led by the Kapuso network's Drama Princess Yasmien Kurdi and Drama Prince JC de Vera, together with versatile stars Marvin Agustin and Angelika dela Cruz. Ms. Dina Bonnevie plays a very special role in this Sine Novela.

Under the direction of Joel Lamangan, Babangon Ako't Dudurugin Kita revolves around the story of Salve (Yasmien), a pretty, naïve young woman who is deprived of education by her adoptive family.

She falls in love with Alfred (Marvin Agustin) and marries him. Salve strives to be an ideal wife but Alfred, an ambitious man, deceives her. Salve has yet to realize that the real reason Alfred married her was only for her inheritance. Alfred is determined to keep Salve's riches a secret and prevent her from learning his secret motive.

Alfred meets a woman whom he thinks can help him fulfill his dreams of becoming rich, popular and powerful. Via (Angelika dela Cruz) is the rich, influential daughter of a politician who falls in love with charming Alfred. They become a couple, causing much heartache for poor Salve.

Salve wants to save her marriage but Alfred and Via connive to destroy it. Salve is devastated when Alfred leaves her for his mistress.

During this time, Salve meets Rod/Derek (JC de Vera), a hardened gangster who eventually gets attracted to her. He also meets Evita (Dina Bonnevie), the matriarch of a gangster family and whom Rod considers as his surrogate mother. Both Evita and Rod/Derek help Salve to fight back and take revenge on the people who made her life miserable.

Will Salve be able to redeem herself from the anguish and pain caused by her husband's deception and lies? Can love find a space to soften the vindictive heart of Salve?

Also in the cast are Ian de Leon as Melvin, Julie's childhood friend; Jay Aquitania as Juno, son of Jango and Evita; LJ Reyes as Joey, Derek's friend who is secretly in love with him; Jenny Miller as Beverly, Alfred's mistress; and Robert Ortega as Fredo, a member of Evita's syndicate.

Special guests for the pilot week are Roi Vinzon as Roberto; Emilio Garcia as Emilio; Mart Escudero as Roman; Jennica Garcia as young Julie and Joseph Bitangcol as young Tyrone.

Babangon Ako't Dudurugin Kita, was originally created by renowned novelist Gilda Olvidado for Darna Komiks. It was transformed into a Lino Brocka opus, which became a blockbuster in the late ‘80s and even paved the way for Sharon Cuneta's nomination as Best Actress in the 1990 FAMAS Awards.