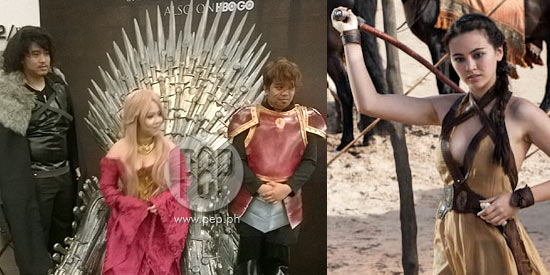 Jessica Henwick, who was born in Britain to a Singaporean-Chinese mother and a British father, will be playing Nymeria Sand in Game of Thrones Season 5. The life-sized replica of the Iron Throne (left frame) is on display at Fully Booked High Street in Bonifacio Global City from April 8 to 23, 2015.

Winter may be coming, as they say in Westeros, but the anticipation last April 8 was as hot as a Philippine summer.

HBO Asia gave select members of the media and fans of the Game of Thrones series a sneak peek into its highly-anticipated Season 5. HBO Asia’s Manager of Communications Angela Poh welcomed the privileged few to the advance screening of the uncut version of episode one at Fully Booked High Street last April 8, five days ahead of its world premiere.

“Game of Thrones is the first of our many HBO Original series to premiere in Asia the same time as the U.S., and the first television series to debut worldwide in over 170 countries simultaneously,” said Poh. “We’re so pleased [to] bring this opportunity for our fans in the Philippines to experience the Iron Throne live. The series is such a huge global phenomenon and we know what a huge hit it is in the Philippines. “

The group in Manila is the first in Asia to watch the first episode titled The Wars to Come. Written by David Benoff & D.B. Weiss; directed by Michael Slovis, the season begins with a glimpse of how the Lannister Twins – Cersei (Lena Headey) and Jaime (Nikolaj Coster-Waldau) navigate royal life without their father, Tywin. Tyrion (Peter Dinklage) finally resurfaces and let in on a conspiracy by Varys (Conleth Hill). In the north, Jon (Kit Harrington) is caught between two kings while across the sea, Daenerys (Emilia Clarke) faces a new threat to her rule.

Further into the fifth season, viewers will get to finally see the first Asian actress to join GoT. Jessica Henwick, who was born in Britain to a Singaporean-Chinese mother and a British father, will be playing Nymeria Sand, the second of Prince Oberyn's eight illegitimate daughters. Nymeria Sand, as described in the books, is as cunning as her father and whose weapon of choice is the bullwhip.

In an interview published on the South Morning China Post, Jessica says about being the first Asian to be featured on the show: "It's overwhelming and scary. I hope I can live up to that responsibility. It's hard to be an Asian actress in London; opportunities are [few].”

Playing her two other sisters on Game of Thrones are Obara (Keisha Castle-Hughes) and Tyene (Rosabell Laurenti-Sellers).

What will happen to their characters this season? “The three sisters come in with a plot to kill the Lannisters. Obara wants to charge in there and Tyene is not thinking at all. She just wants to prove herself worthy. Nymeria keeps thinking how she can hurt them the way they hurt her."

If that is not enough much of a treat, the Iron Throne is on Philippine shores. The life-sized replica of the most coveted seat in all of Westeros will be on display at Fully Booked High Street in Bonifacio Global City from April 8 to 23, 2015. Fans are highly encouraged to experience the Iron Throne themselves—to sit on, and post photos with the hashtags #HBOAsiaGoTS and #IronThronePh.

Some of the celebrities spotted during the advance screening were the Magalona ladies—Maxene, newlywed Saab, and their mom Pia. MYX VJ Chinno Lui-Pio and RX DJ Gino Quillamor were also present. The event was hosted by the lovely Gelli Victor.

Hailed by the Los Angeles Times as the “Best Television Show Ever,” Game of Thrones returns to the Philippines same time as the U.S. for its new ten-episode fifth season this Monday, April 13, at 9 am on HBO with a same day encore at 9 pm. New episodes debut weekly at the same time. The series will also be available on HBO Go on the same day.