Toni Gonzaga to star in new teleserye; says about The Buzz departure: "The shows really come and go." 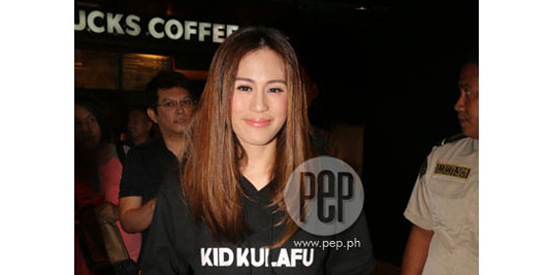 Toni Gonzaga says it was "normal" for The Buzz to be taken off the air. "They really come and go sa almost 15 years ko sa industriya."

This 2015, Toni Gonzaga will return to the small screen as a dramatic actress.

She will be headlining a teleserye that will be produced by ABS-CBN Entertainment Unit Dreamscape Television.

She confirmed this during the April 14 premiere night of Kid Kulafu, which she attended to show support for her fiance, director Paul Soriano.

However, Toni cannot divulge details regarding her TV comeback.

“Eventually we can give the formal announcement pag binigyan na ng go signal.”

She also stated that this is one of the reasons why she cannot confirm yet a date for her upcoming wedding with Direk Paul.

REUNITING WITH DIREK PAUL? Both of their movies are currently being screened in cinemas: Toni and her movie with Coco Martin, You're My Boss, is still being shown while Kid Kulafu opens today, April 15.

Is Toni open with working with her soon-to-be husband?

The last time that they worked together was in the independent film A Journey Home that was screened in 2010.

As much as she is open to the idea, she also said that waiting for the right material matters for them.

THE BUZZ. Toni also shared her views about the ending of the Sunday afternoon talk show The Buzz, wherein she served as one of the co-hosts.

How does she feel that their show was taken off the air?

“What matters is the friendship and the relationships that you were able to build.”

Toni became a host of the show in 2010 along with Boy Abunda, Charlene Gonzalez and KC Concepcion. In 2013, Toni and Charlene left the show when it had a reformat.

In 2014, she returned as a host for its 15th anniversary along with Boy and Kris Aquino.