Jinri Park will dish love advice through her own web show JINRIlationships: A Survival Guide to the Dating Life 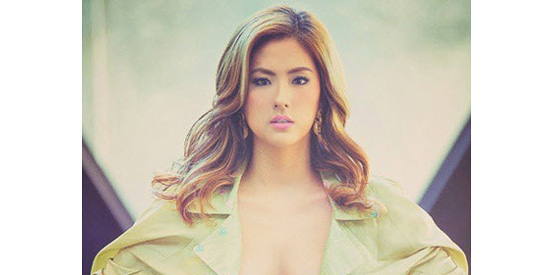 “It’s really such a blessing because it’s my own show with my name as a title.

“So, at first I felt so grateful to have my own show and to have a show that I can actually pitch in my own ideas and be creative and be part also of the production.

“Most of the show is my story, all the episodes consists of my experiences and mostly of my ideas. But of course the professionals, the writers, they do the writing. I am the one who is just pitching the story.”

“Yes. Well, almost all of the projects that I’ve been doing are comedy,” matipid na sagot pa ni Jinri.

“There’s some limitations of course. I wouldn’t do too sexy where you know, it’s like a scene where you’re making love. I wouldn’t do something like that, so far,” nakatawang saad niya na sinabi pang okay lang naman daw sa kanya ang mga kissing scene.

“There is only one Filipino celebrity that I’ve always had a crush on and looked up to, it’s Jericho Rosales.

“He’s like the boy next door, super friendly, well-mannered and a good actor also. He’s a very good actor, I just like his vibe where he is always smiling and nice to everyone.

“Yes, I’m taking Tagalog lessons once a week, I have a tutor, one on one kami.

“It’s just that my problem is, I’m very slow with linguistics. That’s the thing I have no talent. But I’m trying to study it also and yeah, practice.

“I try to mix Taglish. But when someone talks to me in Tagalog, I can understand but the thing is, I cannot speak it. That’s the thing with language, like you can understand faster… like, I know this word, but how do you translate it?” nakangiting saad pa niya.

“I was with them for a year, that’s when I decided to go to Korea so I had to stop.

“I told them, ‘I’m sorry but I need to go find myself, whatever’. So, I stopped shooting with them. It’s my fault that I left. But they were nice enough.

“I mean, after I left, I guested to the show twice. So, yeah, puwede ako mag-guest uli sa Vampire.”

“No, no of course not,” mabilis na reaction niya.

Idinagdag pa niyang wala silang problema ni Pauleen. “I know her, I know her. I’ve met her several times. She’s very nice to me, we have no problems.”

“Yeah, I think they apologized and it was last year pa. Yeah settled na ‘yun, because they took it out, we told them to take-out the pictures po.

“Because, they didn't inform us about it. They didn't tell us that it was gonna be the cover. Because of course, if it’s a sexy magazine, we expect to know which photos… because of course it’s delicate.

“We wanna know what month and what’s gonna be written and what photos they’re gonna put.

“We kept following up with them, but they didn't say anything. Until they just published it out of nowhere,” paliwanag pa niya.

If there’s another offer to be the cover of Uno, are you willing to do it?

“No, we would have to have a settlement first. Like, make sure that you notify us and it’s gonna be on this month and we have to know all the details before I get into the shoot.

“But I’m open, I’m not in bad terms… I don’t have bad blood with them naman.”

“There’s a book in the making, because I had the Jinri Experience. I had two copies. The first one and the second one.”

“Yes, two editions. It will be out, we’re hoping about June or July.”

So, is it a sexier version?

“It’s sexy, but it’s made more of a very natural shots. It’s gonna be more high-end coffee table book. Because the first one, The Jinri Experience, was for the masa, it was affordable.

“The second one would be more of high end, it’s gonna be around thousands pesos.”

How far will you go for a sexy photo shoot?

“It depends on who the photographer is, how it’s gonna be done. So, I’m open to it naman, it depends, it’s just how it’s executed.”

Pero, do you have limitations when it comes to photo shoots?

“Wet-look? I’ve done it already. But not like everything… But I did the wet shirt thing.”