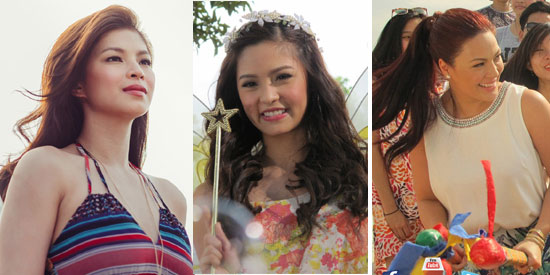 ABS-CBN waves hello to the season of the sun with a fresh take on summer – and love.

The lyrics were penned by Eric Po and Lloyd Oliver Cruz while the music was composed by Marcus and Amber Davis.

Directed by Paolo Ramos and Pewee Gonzales, the 2015 station ID takes on a tourism approach to the thrills of summer and aims to “show the different ways Filipinos express love.”

ABS-CBN already knows the perfect formula for a summer station ID: pick the most viable stars out of its stable, paint them pretty, put them in the beach and let their charms lose.

This time, it attempted to take the summer theme further by incorporating a tourism approach, putting its stars against the backdrop of friendship and romance.

The six-minute video opens to the majestic view of the iconic Mayon Volcano in Albay followed by the appearance of drama superstar Judy Ann Santos-Agoncillo.

Power loveteam Daniel Padilla and Kathryn Bernardo were shown enjoying a lazy summer afternoon on a boat floating in lake. The chemistry between the two stars of Pangako Sa ‘Yo is so strong it send shivers down the spine. To be young and in love in the summer haze is indeed a once in a lifetime experience meant to be relieved in memories.

Angelica Panganiban, who was recently seen in the film That Thing Called Tadhana, was seen enjoying a sweeping view of the sea and the forest from atop a lighthouse tower.

The news and public affairs team were not left out of the fun either. Seen sharing a watermelon snack on a sweltering day were veteran broadcasters Korina Sanchez, Ted Failon, Gretchen Fullido and Boy Abunda.

The video closes with mother and son tandem Kris Aquino and Bimby sharing a hug, the punctuation on the love theme.

With a catchy melody thrown into the mix, the video exudes freshness and happiness that is inspiring. As the beauty of the Philippines unfolds on the screen, it inspires pride in Filipino heritage and friendships.

The feeling of elation placed by Enrique and Liza into the performance of the song is contagious. It’s a slice of sunshine on a drab day.

It’s a concept that works because it both educates and entertains, in effect becoming a public service of sorts by helping advance the country’s tourism promotion effort.

But maybe it is also cramming too much into six minutes.

But the video would have been better if it focused on a single solid theme. Is it Filipino love in various incarnations? Or is it inspiring love of the country and the joys it has to offer for the summer?

The lyrics of the song even lend to confusion.

Sounds like a love song to me — until it makes a sudden turn to make a tribute to the country.

7107 islands with a touch of heaven

Mountains, beaches to the shore, we got more yeah that’s for sure!! People, fiestas fun together

Kahit ano, we got it all

Does it primarily speak of love of a person, love of the country? If it is meant to be ambiguous, it is not serving the direction of the video very well. For such a short production, it does cram so many ideas that are better off treated separately.

Nonetheless, the 2015 summer station ID is absolute eye candy. Even if you put it on mute while eating breakfast and reading the morning paper, it’s really entertaining.

I prefer the previous station IDs that are simpler and straight to the point. Summer, after all, is the season for good old silly fun.

PEPsters, what can you say about the 2015 summer station ID of ABS-CBN? Share your thoughts in the comments section below.