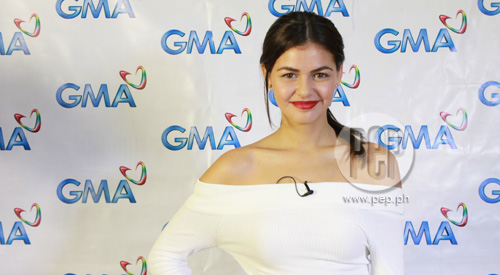 In 2014, Janine Gutierrez was given her biggest break via the television remake of Villa Quintana, wherein she co-starred with current boyfriend Elmo Magalona.

This GMA-7 teleserye, which aired from November 2013 to June 2014, was nominated in the 6th Golden Screen TV Awards that took place last Sunday, April 26.

It turns out that this Kapuso show was able to beat ABS-CBN programs Dyesebel and Pure Love in the Outstanding Adapted Drama Program category.

In an exclusive interview with PEP.ph (Philippine Entertainment Portal) last April 16 at the GMA Network Center Executive Lounge, Janine admitted that it's a big deal for her to know that Villa Quintana is being recognized by award-giving bodies.

“It will always have a special place in my heart talaga kasi yan yung una kong lead role, tapos I really really love the cast, the director [Gina Alajar], everything.”

After winning their trophy given by the Enpress, Janine posted in her Instagram account a photo of her with boyfriend Elmo Magalona.

So happy to share that Villa Quintana won the Golden Screen TV Award for Outstanding Adapted Drama Program! Thank you so much Enpress! Congratulations Direk @ginalajar and our writer Sir RJ Nuevas, as well as the whole creative team and the staff of the show. Thank you also to our bosses at GMA. We forgot to say last night that we also dedicate this to you, Tito Roy Alvarez ❤️ Wearing my fave, @vaniaromoff ❤️ P.S. Happy happy birthday, Isagani!!! Congratulations 💋💋💋


Janine also pointed out that she was once a fan of Donna Cruz, the actress who played her role in the original soap opera aired way back in 1995.

WORKING WITH MOM LOTLOT. Janine admits that she enjoys being a celebrity because she gets to work with celebrities whom she would just watch on TV.

“You get to meet a lot of people na hindi mo mami-meet otherwise, like ‘yong mga pinapanuod ko nung bata ako, nakakatrabaho ko ngayon. So that’s a super duper plus for me.”

However, she has yet to be given a chance to work with her mother, actress Lotlot de Leon.

This 25-year-old actress also noted that getting to interact with fans is another perk of being a public figure.

“’Tsaka meeting the fans, kasi it’s always interesting to hear stories about people na, like from other countries pa then they go out of their way to tweet you, mga gano’n. So nakakatuwa.”