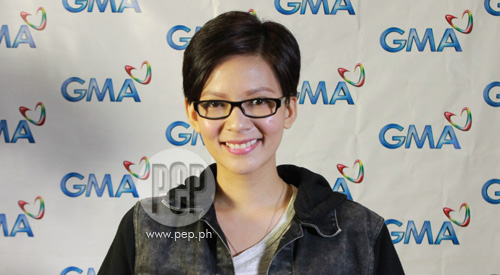 Chynna Ortaleza realizes the huge responsibility of playing a lesbian on television. “It’s a big responsibility that we’re carrying. All of us are playing lesbians in the series. We have to parang carry the banner of LGBT, and siyempre as a straight person, kumbaga parang, it takes ano din, e, a lot of understanding." To describe her character called Batchi in The Rich Man's Daughter, she says:"Lagi siya ‘yong gust

Chynna Ortaleza will be playing a lesbian in the upcoming GMA-7 drama series The Rich Man’s Daughter.

She will play Batchi Luna, the best friend of Althea (played by Glaiza de Castro) who will be romantically involved with the lead character Jade.

The lead role of Jade was supposed to be played by Kapuso primetime queen Marian Rivera. However, she had to back out due to her pregnancy. She was then replaced by Rhian Ramos.

In an exclusive interview with PEP.ph (Philippine Entertainment Portal) after the PEPTalk shoot last April 16 at the GMA Network Center Executive Lounge, Chynna was able to describe her role in detail.

“Bale, what’s nice about my role is 'pambasag' [siya]. But the truth is, she is representing the 'butch' community, the stronger male aspect of ‘yong lesbian sex.

The twist about her character is that she will be tackling the more heartwarming relationship aspect in the upcoming teleserye.

She also disclosed how her role is related to the lead character in the series, Jade.

“So that’s why as a best friend, sinu-support niya yun. Na kumbaga parang she welcomes Jade as much as possible into the fold. And understands how Althea is, na at the same time, wina-warn niya rin ‘yong bestfriend niya na parang, ‘But she’s straight. It’s a complicated situation, are you sure you want to enter it?’ So ganun so far ‘yong dynamic ng relationship ni Jade ‘tsaka ni Batchi.”

FROM CHYNNA TO BATCHI. Chynna is happy to be given such a role because this has been one of her career goals.

She said she did not have a hard time shifting to this role even if she just came from the primetime show Second Chances, since she already did a similar role in an episode of Magpakailanman.

But of course, she did not hide the fact that playing a lesbian role is difficult.

“Kaya like with me, if there’s an opportunity to become Batchi, I’ll be Batchi. Like for PEPTalk, you know, let’s play Batchi, I’ll dress up like her. So that mas madali pumasok pagdating sa taping na hindi na kinakapa. Tapos off days, of course, I go back to myself. But you know, every opportunity I get, I play Batchi.”

The two shows also have the same director, which is Dominic Zapata, and creator, Suzette Doctolero. Chynna also became a part of both shows.

How will TRMD be different from MHL?

“Well, I was part of that [MHL] towards the end, they tapped me to play Stella, yung parang baby mommy ni Dave [played by Victor Basa].

"It’s the same in terms of we are trying to help the gay community and the lesbian community, to have a solid voice in the Philippines. Di ba, ‘yon naman talaga ‘yong goal ng network and the creative team namin, yung writers namin, si Miss Suzette, kumbaga parang it’s the same people who made My Husband’s Lover but the attack is different. Kasi kumbaga, they’re very careful na wag i-imitate yung ginawa nila sa MHL, the technical aspects of the show is very different from what they saw in MHL.

“So, so far, that and how, kasi marami kaming na-meet na parang same ng character ni Jade na they cannot come out because they feel like it’s so hard because people don’t seem to accept lesbians as easily as homosexuals in this country.

BIG RESPONSIBILITY. Chynna said that this will be a far cry from the previous roles she played in past teleseryes since she is not playing a villain for the first time after many years.

More than that, what makes it different for her is the big responsibility she has in portraying a lesbian on television.

“It’s a big responsibility that we’re carrying. All of us are playing lesbians in the series. We have to parang carry the banner of LGBT, and siyempre as a straight person, kumbaga parang, it takes ano din, e, a lot of understanding.

“Malaki talaga yong responsibility namin, kasi isipin mo out of everyone, we got tapped, and that’s the job of an actor, of an artist, to open people’s minds. So we got tapped to help the LGBT in the Philippines to progress.

“So ang laking bagay no’n for us, for all of us in the series. We’re very excited. Sana makatulong kami sa kanila.

“Kasi above the fame or above the interest and above the money or anything, as an actor, as an artist, that’s what we want to do. That’s our goal. Parang to open up people’s minds to other things that they don’t understand.”

Another factor that made her accept the role is because of her relatives who are also lesbians.

“And my family, we do have lesbians in my family. That’s why I guess that’s also the reason why I want to be able to give life to a character like that, because I have loved ones who struggle with the same thing.

“Kasi parang they’re lucky though ‘coz they’re in the States. But if they’re here, it’s the same banana. And even if they are in the States, it’s not that easy.”

CLICK BARKADA. Before she became known as a character actress, Chynna first started as a teen star in the now-defunct hit teen-oriented show Click, which was aired by GMA-7 in 2001.

How does she feel that it has already been almost 15 years since the show first started?

“Of course, ako I always feel very lucky because that was the start of my career. If I didn’t get into Click and if I didn’t portray Mimi, I don’t think people would know Chynna Ortaleza.

“It was a good start, definitely kasi parang blessing din na during that time, kinagat din talaga yung show. And kinagat yung loveteam namin ni Richard [Gutierrez]. So when I look back sa Click, parang lagi akong may fun memories kasi sa totoo lang, it was really like a time to learn, and a time to make my friends.

“It was exciting for me because it was like my whole entry into show business. Exciting time siya and at the same time it was a learning experience.”

She also disclosed that if there’s a chance, they also meet-up and reminisce what they had during those days.

Does she foresee a possible reunion?

Chynna also shared that she is happy everytime she hears people still raving about the show.

“But I’m happy to see I made people, parang influenced by the show. It makes me feel good kasi, okay hindi lang pala laro-laro yung mga ginawa namin before. There were people who genuinely grew up with us.”

LOYALTY TO GMA. Since starting her career in Click, Chynna has been given meaty roles by her mother network. Her love team with Richard Gutierrez became such a hit that they starred from one show to another at the same time.

In 2002, they played supporting roles in the primetime show Habang Kapiling Ka and they headlined the first two seasons of the Sunday teen show Love to Love while doing Click.

However, when her love team with Richard ended, she started foraying into different supporting and villain roles in the Kapuso Network.

For Chynna, being loyal to GMA for the past 15 years has been worth it.

“Of course, there are times when you think about it, 'does it pay to be loyal?' There were times when I was thinking of, hindi naman yung like, kasi naisip ko rin na I have to keep on working.

“Kasi in a career, there are high times, low times and then there are medium times you know. So no’ng pag low times, of course, I have to think of my family, and naisip ko, of my future, if I was gonna stay in a place where hindi na ‘ko ginagamit masyado.

“And ‘andito pa rin ako sa GMA, up to now. So parang yung mga nangyayari sa career ko ngayon, and ‘yong mga things na nagagawa ko behind the camera, it wouldn’t have happened if I didn’t go through that with my network.

“And now I feel like, it just gives you wisdom, na parang okay it’s nice to be loyal to a place that treats you like family. And it’s hard to let go with the people you have good relationships with here. Your friends, everybody who have gotten to know the person behind the celebrity.

“So ‘yun talaga ‘yung isa sa malaking considerations ko pag naiisip ko na should I grab another project from another station or not.”