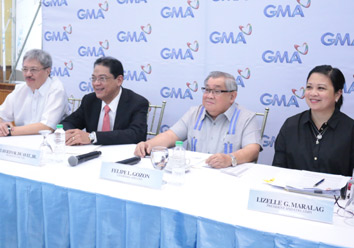 This is based on a press statement furnished by the GMA Corporate Communications department.

The broadcast company posted a double-digit growth of 25 percent versus the same period in 2014.

Revenues for the first three months improved by 5 percent to P3.006 billion, with higher airtime sales from Channel 7, GMA News TV and Radio accounting for the increase.

Operating expenses slightly went up by 3 percent to P2.432 billion due to the increase in production cost as the Network continued to strengthen its programming content.

GMA ended the quarter with an EBITDA (earnings before interest, taxes, depreciation and amortization) of P986 million, 20 percent or P163 million higher than last year.

“Our performance in the first quarter is a good indication that 2015 will be a much better year for our company. We are hoping to sustain this momentum throughout the year,” said GMA Network Chairman and CEO Felipe L. Gozon.

Earlier, GMA’s Board of Directors has approved the pay out of cash dividends amounting to P1.215 billion equivalent to P0.25 centavos per share. The dividend is payable on May 19, 2015 to shareholders on record as of April 24, 2015.

GMA International, the business unit that manages the distribution and operation of the Network’s international channels, continued to register growth in terms of subscribers and viewership. By the end of the first quarter, flagship channel GMA Pinoy TV had an estimated 1.4 million viewers worldwide, a 6 percent increase from the same period in 2014. Meanwhile, GMA Life TV had an estimated 500,000 viewers, a 12 percent increase from Q1 2014. GMA News TV International remained as the top performer in terms of growth, with an estimated 190,000 viewers, a 47 percent increase in viewership from the same period in 2014.

GMA Worldwide, the Network’s subsidiary which acquires foreign content for GMA and syndicates Kapuso programs to the international market, sold 1,057 worth of program hours amounting to USD 468,570 in the first quarter for telecast in other countries including Vietnam, Cambodia, Myanmar, Thailand, and Malaysia, among others.

GMA New Media (NMI) achieved a 63 percent growth in online advertising revenues in Q1 versus the same period last year due to a number of factors. Foremost is the optimization of the portal in order to make it more suitable for programmatic buying*.

There were also continuous enhancements made on the websites along with the strategic use of social media that led to GMA News Online (gmanetwork.com/news) and GMA’s official entertainment website (gmanetwork.com/entertainment) posting significantly more pageviews and expanding their respective audience base compared to last year, according to Effective Measure.

All the initiatives implemented in the quarter contributed to a corresponding increase in available advertising inventory that in turn improved opportunities for monetization.

Meanwhile, GMA topped an independent study measuring digital TV presence in the country, confirming the company's readiness for the eventual shift to Digital TV (DTV). The study, conducted by local smartphone and tablet manufacturer Starmobile, revealed that GMA 1SEG and GMA News TV were available in 10 out of the 14 test locations in Metro Manila. GMA came ahead of other channels surveyed including ABS-CBN, ABS-CBN Sports, TV5, and AKSYON TV, etc.