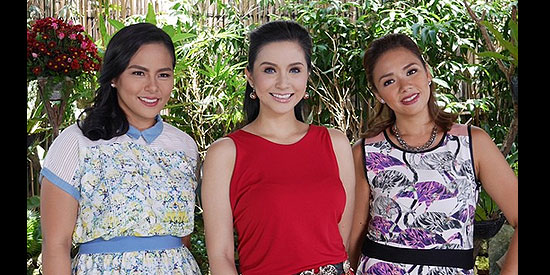 At the recent presscon of Happy Truck Ng Bayan, Mariel was asked to react to an entertainment editor’s feedback that her onscreen presence overshadows that of her other co-hosts on TV5’s lifestyle show for moms.

“It’s not that kind of show. It’s a wholesome show talaga na maganda.”

In an interview with PEP.ph (Philippine Entertainment Portal) and other members of the media, Mariel further clarified that she’s on good terms with LJ and Danica.

Mariel chalked it up to the fact that all three of them are happy and content with their respective married lives.

The 30-year-old TV host also gave credit to the production team behind Happy Wife, Happy Life for coming up with good concepts for the show.

“And this is because ang galing ng segment producers namin.

The TV5 star even agreed to extend her hosting stint even if it means she had to work on more advanced episodes for the show.

As it is, she’s scheduled to fly to Spain with husband Robin Padilla for a much-needed vacation starting June 15.

“Pumayag siya,” she said when asked about Robin’s reaction to her workload.

Recalling one of her unforgettable experiences in the show, Mariel enthusiastically narrated that she had an unexpected immersion in sifting through garbage in Commonwealth, Quezon City.