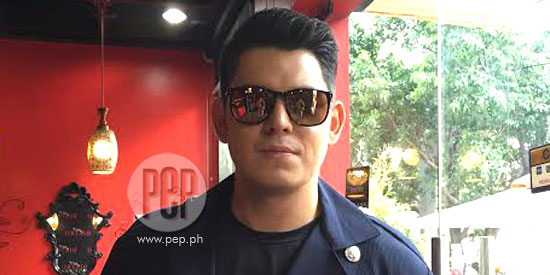 Known for his lead roles in teleseryes and movies, the 31-year-old actor said he didn’t think twice about accepting the offer from TV5 and YU&IQ International.

YU&IQ International is a newly-established production company in the country that aims to mount the K-Pop Icon Search (KIS) franchise all over Asia.

Richard explained how he was chosen by YU&IQ International to be the main host of KISPinoy, which will air its pilot episode next Saturday, June 27, on TV5 at 9 p.m.

“Nakita nila yung profile ko then they invited me to be part of this project.

“This is a talent show.

TIPS FROM K-POP STARS. Although he’s admittedly a newbie when it comes to K-Pop, Richard shared that he made an effort to learn more about it by watching Korean music videos and getting first-hand knowledge from renowned Korean singer/dancer/rapper/choreographer Jay Park.

“I also spoke to one K-Pop star, si Jay Park.

“Apparently, may contact rin kami sa kanya so I called him up and I asked for advice.

Richard also mentioned that he had the chance to talk to a members of a Korean boy band who taught him more about importance of discipline and precision when performing on stage.

“When I spoke to the Uniq guys, nung pumunta yung grupo ng Uniq dito [sa Pilipinas], I asked one of the members how long sila mag-train before sila maging part ng group.

“When they entered [their talent agency], they entered individually. They trained for a certain amount of months.

“Sabi ng isa they train from six months to three years before they become part of a group.

“So within six months if you’re ready, you can be part of a group.

“If you’re not, you still continue training.”

CELEBRITY JUDGES, CONTESTANTS AND PRIZES. Open to contestants aged 13 years old and above, KISPinoy aims to discover Asian talents who have what it takes to excel in an integrated K-Pop training in terms of singing, dancing, stage presence, and fashion (called the K-Pop system).

Contestants will be shortlisted from 100 auditionees down to 20 finalists who’ll vie for the coveted Top 5 finalists who will have the chance to further their K-pop training in Korea before the final round of showdowns.

“We’re gonna do some episodes there and may surprise element kung bakit kami pupunta sa Korea.

“For me, just to experience that and ma-tour nila kami sa different training facilities nila, to experience the whole K-Pop culture [is really something to look forward to].”

The winner will not only receive the P1 million peso cash prize, but also a management and training contract in Korea.

Two of the Korean celebrity guest judges are from the K-Pop boy band U-KISS namely Eli Kim and Kevin Woo. The rest of the guest judges include two unnamed Korean singers and two Korean producers.

Directed by Rich Ilustre, KISPinoy is hosted by Richard together with Jinri Park as segment host.