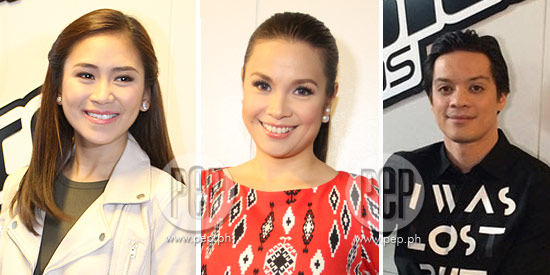 The Voice Kids coaches (L-R) Sarah Geronimo, Lea Salonga and Bamboo will "fight" each other to win the heart of the next champion.

Coaches Lea Salonga, Bamboo, and Sarah Geronimo will once again search for kiddie artists with big voices for The Voice Kids Season 2.

Starting tonight, June 6, the three coaches will have a friendly fight to convince the next possible The Voice Kid winner to join their team.

In a press huddle with the coaches recently, Lea said the bantering among them will always be fierce.

“Truth be told, all of us are encouraged to be palaban,” she said with a smile.

“Lahat naman kami, we're told by the powers that be, 'The kids want to see you fight for them.'

“That sways decisions. Kasi, if you fight really hard for somebody, it shows the kid, 'Oh my God, Bamboo is fighting for me.'

“It's a mind-blowing experience.”

“We do not do it just for the show or the TV audience. It's for the benefit of the person who is standing there in front of us.

While sometimes the exchange of words between coaches become personal, they know that it's just part of their job.

“And it makes the show what it is. I mean, if you see any version of The Voice anywhere in the world, you will see coaches bantering with one another.

“It's something encouraged. We're really pushed to do it.”

To raise his game this season, Coach Bamboo is practicing his use of Tagalog especially when mentoring the kids.

“There's one thing that I know now, and the show has reminded me again, Tagalog,” he said.

“I'm really pushing myself to speak Tagalog to better connect with the children.

“Kasi, minsan it goes over the head, 'yong coaching ko when I say something in English.

“Dati I need to talk to someone to speak to them. Pero I sort of learn to do it on my own na.

“I've been practicing my Tagalog. I give myself a pat on the back.”

Coach Sarah, on the other hand, promises to be more relaxed this season.

During the first season of ABS-CBN's reality show, Lyca Gairanod of Team Sarah was hailed as the first The Voice Kids winner.

However, she was quick to add that she will still do her best to make one of her team members win the title.

“Siyempre, nandito tayo, we're in it to win it,” she said with determination.

Aside from mentoring Lyca, Sarah was also the coach of The Voice of the Philippines Season 2 winner Jason Dy.

The pilot episode of The Voice Kids Season 2 airs on ABS-CBN tonight, June 6.