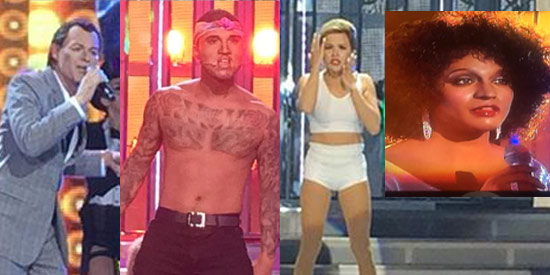 In the grand showdown of Your Face Sounds Familiar, Jay-R embodied Frank Sinatra by singing "New York, New York"; Edgar Allan Guzman channeled Chris Brown when he performed "Turn Up The Music"; Melai Cantiveros rode a wrecking ball just like Miley Cyrus for "Wrecking Ball" while Nyoy Volante impersonated Whitney Houston for the song "I Will Always Love You."

Your Face Sounds Familiar final four contenders Jay-R, Edgar Allan Guzman, Melai Cantiveros and Nyoy Volante brought the house down as they impersonated their chosen icons in the grand showdown.

They performed in front of a jampacked audience earlier tonight, June 6, at the Resorts World Manila Newport Theater.

A VTR was shown revealing how the final four contestants selected the icons they would portray during the grand finals.

Jay-R was the first to perform as Frank Sinatra. He performed the song "New York, New York" as he wore Frank's staple balladeer outfit: a suit and tie.

He shocked the audience when he took off his leather jacket and danced topless, baring the body art made to look like Chris' tattoos. He even went up several rows and danced like crazy in the aisles of Resorts World Manila.

Superstar Nora Aunor was present in the audience area to support EA, who played as her son in TV5's miniserye Sa Ngalan Ng Ina.

Wearing an all-white sexy outfit, Melai Cantiveros also shocked everyone when she went out as Miley Cyrus and performed "Wrecking Ball." Her husband, Jason Francisco, kept on jumping up and down as he cheered for the comedienne.

She earned a standing ovation from the judges when she rode a wrecking ball towards the end of her performance.

The last performer of the night was Nyoy Volante, who channeled Whitney Houston. He started his number by giving an a cappella rendition of "I Will Always Love You."

Nyoy was the only contestant who embodied an icon from the opposite sex.

Towards the end of the show, voting lines were opened to allow viewers to decide who will become the first winner of Your Face Sounds Familiar.

Billy then made a special announcement: there will be a Season 2 for Your Face Sounds Familiar.

PEPsters, who do you think will win YFSF Season 1? Share your thoughts in the comments section below.