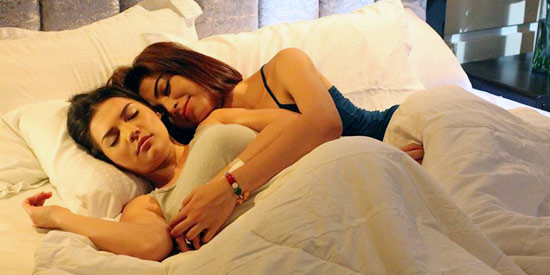 In The Rich Man's Daughter, the father of Jade (played by Rhian Ramos, left) offers a a hundred million pesos to the man who will make her leave her lesbian lover Althea (played by Glaiza de Castro).

What can viewers expect from GMA-7's Telebabad Block?

The Kapuso Network promises to offer primetime dramas that will continuously engage viewers with exciting developments.

Pari ‘Koy aims to uplift the human spirit, there are bittersweet moments in Let The Love Begin, while the characters of The Rich Man’s Daughter bravely face the truth.

After garnering positive comments from some of the priests of the Catholic Bishops’ Conference of the Philippines (CBCP), GMA Network’s first ever faith-serye, Pari ‘Koy, continues to grab attention from viewers and netizens.

Aside from its interesting story, Kapuso Primetime King Dingdong Dantes gets raves for his effective portrayal of Father Kokoy, a priest who is known for his non-traditional and non-conformist ways of bringing people closer to God.

There’s definitely more to watch out for in Pari ‘Koy especially now that Michelle (Carla Abellana) finally learns that Pinggoy (David Remo) is her long lost son. Overwhelmed with joy, Michelle and Jude will decide to ask permission from Father Kokoy to take Pinggoy home. Now that the truth was finally revealed, witness how Father Kokoy’s faith and perspectives in life be moved by the circumstances happening around him.

Meanwhile, Matthew (Victor Neri) will finally have the courage to confront and declare his love for Noemi (Sunshine Dizon). As a dedicated mother, Noemi will do everything she can to get her daughter, Sarah (Jillian Ward), from Simon (Carlo Gonzalez).

Kapuso viewers can expect more confrontations and revelations on the original series Let the Love Begin.

The mother of Pia (Gabbi), Sophie (Rita Avila), is alive. This shocks Tony (Gardo) and the revelation will turn the lives of the characters. Tony (Gardo) will begin to rekindle his love for Sophie. He now explores the possibility of an annulment of his marriage with Celeste (Donita). This makes Celeste furious and will do anything to stop Tony’s plans. When Tony decides to make Pia and Sophie meet, Celeste was the first to arrive in their reunion. And in a fit of anger, Celeste fights Tony until she pushes him off the cliff.

Meanwhile, Erick (Ruru) becomes the new mystery DJ of Sky FM as DJ 1-Direcho. Pia (Gabbi) and her friends immediately become his fans and they are now part of the 1-Direchoners.

Pia has a crush on DJ 1-D and doesn’t look Erick’s way that much anymore. Erick becomes jealous of Himself. Jeni (Aiai), on the other hand, learns that Erick is really in love with Pia. She is afraid that Erick will also experience the hurt and the pain that she went through before, with Erick who is now with falling in love with Pia.

GMA Network’s groundbreaking series The Rich Man’s Daughter continues to take its viewers at the edge of their seats as each episode gradually reveals the personal truths of each character.

This week on The Rich Man’s Daughter, Oscar (Al) finally found out that his only daughter Jade (Rhian) is a lesbian and in a relationship with Althea (Glaiza).

The business tycoon will do everything in his power and influence to separate the two and to save their family’s reputation. He even offers Althea money just so she stays away from Jade’s life. However, she rejects Oscar’s offer and continues to fight for her love for Jade. This angered Oscar more so he continues to threaten Althea by saying that he will do anything just to get Jade back.

Oscar announces that he is looking for a suitor for her daughter and is willing to pay a hundred million pesos to any man who will marry and make her straight again.

The primetime shows of GMA Telebabad starting with Pari ’Koy, Let the Love Begin and The Rich Man’s Daughter air weeknights after 24 Oras.