Meet the Pinoy hosts of Hi5 Philippines on TV5 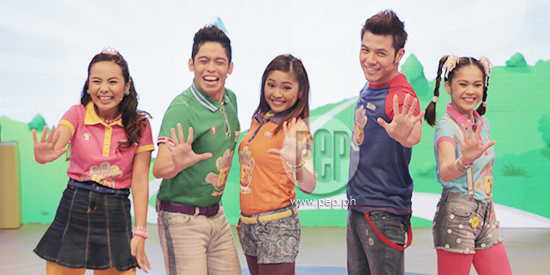 Meet the new hosts of Hi5 Philippines, the local version of the award-winning children's edutainment program.

Hi5 Philippines is composed of Gerard Pangusan, Aira Binas, Rissey Reyes, Alex Reyes, and Fred Lo. They were introduced to members of the media on June 11 at the TV5 headquarters in Mandaluyong City.

This is the first time that the Hi-5 franchise assembled an entirely new team for the localization of the show in Asia.

SAY HI TO THE CAST. PEP.ph (Philippine Entertainment Portal) and other members of the media got to know more about the cast members during the press conference.

Performing in front of crowds is nothing new for Gerard because he was an events host and a theater performer before joining the team.

Gerard Pangusan told the press, “I used to host events for kids and family occasions, private and corporate events as well, and also with a little theater background.

Aira Binas used to be in the field of Foreign Service but her passion for performing led her to a spot in the team.

Rissey Reyes also had a detour before following her true passion. This Hi5 Philippines member is a graduating Anthropology student of the University of the Philippines. However, Rissey was also active in theater and different musical productions.

“So mostly musical theater for children, Batang Rizal and William.

Alex Reyes just graduated from the University of Santo Tomas. Alex fell in love with theater and performing during her college days.

“So dun po nag-start yung love ko for singing and dancing, actually, it’s a passion of mine.

“And also, I also love kids. I have nephews and nieces that I really sing to.

Fred Lo is the designated “kuya” of the group. Before joining Hi5 Philippines, Fred was a full time theater actor and teacher for musical theater.

He disclosed, “I was a full time theater actor for five years.

“So basically, that’s what sparked the interest for Hi5.

“All my pamangkins, all 27 of them, marami po sila pero they all love Hi5.

“And it really just, there’s really something about this show that really attracted me to it.

AUDITION PROCESS. Members of the press asked about the qualifications that TV5 management looked for in order to choose the hosts of Hi5 Philippines.

Sienna Olaso, TV5’s Vice President for Production Finance and Special Projects, noted that the ability to sing and dance were definitely must-haves for those who applied.

The TV5 executive also added that sincerity is also an important factor they considered.

During the final selection, kids were also brought in to help them determine the five members of the group.

TV5’s Vice President for Marketing Melvin Nubla said, “When we got the selection we also looked at the connection between the cast and the kids.

“When we’re doing the actual selection, there were actually kids there.

“So we were looking at, ‘Okay, the kids are geared towards this girl or this guy.’

“That helped us make the selection.

PINOY TWIST. Sienna assured fans that the Philippine version of the program will stick to the original format of the kid’s show.

“Hi5 is a global brand and based on the directions of the management, we want to stick to the brand.

“At saka tinuturuan nila kami, we consult with them.”

Some segments of the program will now be done in Tagalog.

“Gagamitin namin yung Chocolate Hills instead of the Pyramids.

Viewers can also expect some of their favorite Hi5 songs to be translated to Tagalog.