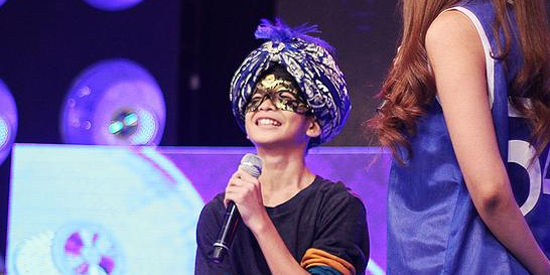 During the June 15 episode of It's Showtime, hosts Karylle and Vice Ganda introduced the first housemate of Pinoy Big Brother. He is Ryan, a 14-year-old teen who hails from Cebu.ï¿½

The first housemate is Ryan, who is dubbed as the “Kid Sunshine of Cebu.”

When he entered the stage, he was wearing a headdress and an eyemask, which served as his disguise since his identity is not yet supposed to be revealed.

He gamely showed his dance moves to the tune of Pharell William’s “Happy.”

Before Ryan’s appearance in the variety show, ABS-CBN TV Production Head and director Laurenti Dyogi tweeted information about the housemate.

Ryan is 14 years old and a native of Cebu. He auditioned in Pacific Mall Cebu City.

#PBB737BigReveal i stand corrected, Ryan is 14yrs of age. apologies .

RYAN THE SINULOG DANCER. In an interview aired on TV Patrol, Ryan revealed he was bullied when he was a child.

Even though he gave an all-out performance, the 14-year-old boy never thought that he would pass the auditions.

Aside from being a Sinulog dancer, housemate Ryan is an honor student who writes for their school paper.

His father is a migrant worker in Saudi Arabia, which is why he grew up with his mother.


Last June 12, Direk Lauren tweeted that 7 housemates will be revealed prior to the opening of the PBB house this Saturday.

#PBB737 seven housemates to be revealed this wk prior to kickoff on saturday. abangan!

PBB 737 will air its pilot episode this Saturday, June 20.