History Channel's Alone is the ultimate test of man's survival 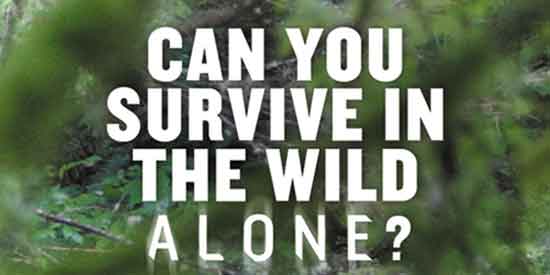 A first of its kind, the reality show Alone will feature 10 men situated in the harsh conditions of the wild until only one is left standing. Dubbed as the ultimate test of man’s survival, the program will premiere on the History Channel this June 22.

Will you survive out in the wild?

This is the challenge posed to the 10 male contestants of History Channel's upcoming survival program, Alone.

The said reality-based cable show program, which could be the boldest survival experiment ever attempted, will showcase 10 men in the wilderness of Vancouver Island in Canada.

Alone will premiere on June 22 in more than 200 territories across the globe.

In line with this, History Channel's newest survival program will have an exclusive 4D experience at the Cinema Lobby of Trinoma Mall in Quezon City on June 20 to 21. This will allow viewers to have a virtual experience of being alone in the wilderness.

The 10 contestants will try to outdo each other until only one man is left standing to bring home $500,000.

Part of the challenge will see these contestants enter the backcountry carrying only what they can fit in a small backpack. Each of them has the freedom to choose the 10 items to bring in order to help them survive in the harsh environment where wild animals are present.

They will hunt, build shelters, and fend off predators. They will face extreme isolation and psychological distress as they plunge into the unknown and document the experience themselves.

Dubbed as the ultimate test of man’s survival and a first ever attempt of its kind on TV, the contestants will have no camera crew and producers to help them in the most difficult and dangerous situations. With no crew behind, the contestants are also tasked to record all the challenges they will face in the wild forest.

The 10 ordinary men, who left their career and family behind, will be dropped off in separate and extremely remote locations and will have no interactions with each other. Each of them will have to depend on their instincts and skills alone.

While each character battles to simply enter the dense forest and find a suitable base camp, they must also find water and make a shelter before night falls and temperatures drop. As the sun goes down, a new challenge presents itself: relentless rains and the struggle to build a fire without matches. Even worse, some find that water, shelter and fire are the least of their worries when the island's large predators wake from their dens and begin to stalk their new neighbors.

The 10 contestants include include a law enforcement officer, a carpenter, corrections officer, outdoor gear retailer, a former military man, an outdoorsman, a family man, an expeditioner, a Boy Scouts of America member, and a post-apocalyptic fiction author.