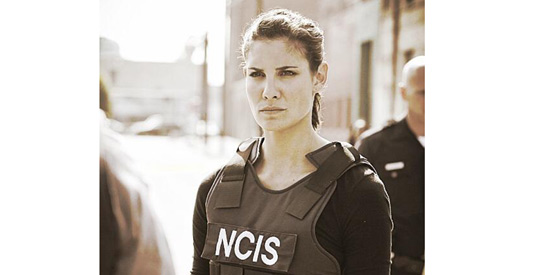 In real life, the American-Portuguese actress also takes on multiple roles: that of being an actress, a wife, and a mother to her son River Isaac Olsen, born in January 2014.

Fortunately for Daniela, she is allowed to bring her son with her to the set: “Our show has been very kind to me and they let me bring my son to work.ï¿½ So I get to spend the whole day with him, so in that sense, I get to be a full-time mom. Of course I have somebody there to help me take care of him because when I’m on set I can’t do that. But, essentially, I’m present in his day, you know, 24 hours a day, which is what I’ve always wanted.

“My son has become the mascot, basically. Everybody on our crew knows my son. He’s part of the furniture now.”

The 31-year-old actress also talks about her priorities in life with infectious eagerness: “I love my job, and when you love what you do, it’s not work.ï¿½ And I’m surrounded by really great people who are supportive. My husband is unbelievable and supporting in this working mother situation that I have. He comes to work, too, and he works with us sometimes, and he gets to be a part of that.”

FAMILY ON SET. Daniela tells us that her main co-stars--Chris O’Donnell, LL Cool J, Eric Olsen, Linda Hunt, Miguel Ferrer, Barrett Foa, and Renee Felice Smith--are as much as a family to her as her real-life one.

“I think the funnest days are when everybody is there, when the whole cast is there, when we’re shooting the scenes, like in the bull pen. The way we bond is when they’re moving the cameras around, or when we have a few minutes break when they’re doing something technical.

“Instead of everybody just dispersing and going to their trailers, we all sit down together. You know that little living room area next to our desk? We all just sit there and laugh, and take pictures, and tell stories, discuss all sorts of things: music, economy, politics, the world, traveling, our weekends with our children, our families. We are a family, we are absolutely a family, and that’s how we behave around each other.”

NCIS: LOS ANGELES. At the end of the last season, special agents ‘G’ Callen (Chris O’Donnell) and Sam Hanna (LL Cool J) are left trapped in a drug cartel submarine that was packed with the explosive substance ammonium nitrate – and the series returns right back to cliffhanger.

The terrorists are planning to destroy an aircraft carrier off San Diego using the armed submarine in which Callen and Sam are still trapped. The situation deteriorates as they lose contact with their team who are trying to locate the submarine and stop the attack. As the clock runs down, Callen and Sam realize that to prevent the disaster they may have to die…

As the team tries to locate and save Callen and Sam, the focus also falls squarely onto Hetty's (Linda Hunt) struggle as she is due in Washington to be questioned by the Senate for her failed mission in Afghanistan.

The highly-trained agents of the Naval Criminal Investigative Service continue to do what is necessary to protect national interests.

On season 6 of NCIS: Los Angeles, fans will get to see Kensi and Deeks give their romantic relationship “a shot,” says Daniela. As for Kensi, she has to face her demons and deal with the consequences of the events that transpired in Season 5.

Daniela says of her onscreen character: “That’s something that you kind of do in partnership with the writers: it’s their job to give the character obstacles and goals, and it’s my job to make them real. I try to make her [Kensi] as human as possible. I want her to react to things as much as I would, or human beings would. So I think the development of characters is very much teamwork.”