PBB 737 housemate Bailey asked to choose between Barbie and Kenzo 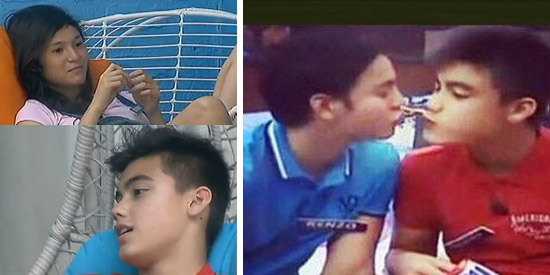 Bailey Thomas May confessed that he "kinda" likes Barbie Imperial. Meanwhile, he has also has a close friendship with Kenzo Gutierrez (wearing blue).

During the weekend, PBB 737 housemate Bailey (tagged as the Global Gwapito of UK) confessed that he has feelings for Barbie.

He asked advice from Kenzo on what to do and he told him that Bailey should just say that he "kinda" likes her so that she won't get pressured.

Inside the girls' room, Bailey tried to tell Barbie but first he made her promise that she won't get mad at him. Finally, the two of them had the chance to talk while they were seated near the swimming pool.

After much prodding, Bailey admitted: “I don’t want you to get angry...”

“I have only known you… seven days now and...I kinda like you.”

Barbie simply nodded and tried to control her smile but she didn't say anything.

Bailey asked her, “Is that okay with you?”

Barbie quipped, “I’m mad. Joke!” as she pretended to walk away.

Bailey disclosed, “I was rally scared of asking you because you might stop talking to me.”

Barbie teased him, "Starting tomorrow, I will ignore you. Joke!”

CHOOSING BETWEEN THE TWO. In a video uploaded on Daily Motion this week, a scene inside the PBB house shows 16-year-old Aila Antopina asking 12-year-old Bailey to name the person whom he loves among the housemates.

Before Bailey could even answer, Kenzo interrupted, “Barbie or me?”

Kenzo, 18, is the closest boy friend of Bailey inside the PBB house. On the other hand, Bailey admitted recently that he's attracted to Barbie, 16.

“Is there a choice of anything else?” Bailey replied.

After this, Aila went back to her first question, “Kenzo or Barbie?”

To which Bailey replied, “I can't answer.”

Bailey blurted before the clip ends, “If I had to walk out, I'd walk out.”