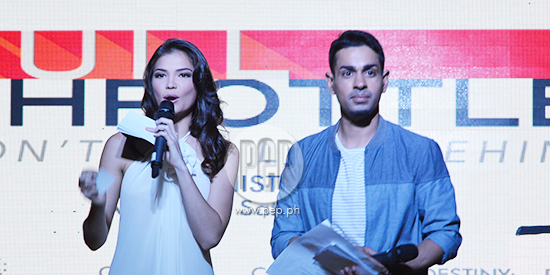 Rhian Ramos and Sam YG are the hosts of History Channel's fisrt-ever locally produced show titled Full Throttle. This motoring show will also be aired in other Asian countries.

For this motoring show, she will be joined by Boys Night Out DJ Sam YG.

Both Rhian and Sam YG were present at the trade launch of the show held last July 16 at House Manila in Remington Hotel, Pasay City.

In an interview with PEP.ph (Philippine Entertainment Portal) Rhian and Sam revealed that the show will feature not just cars but also other motorized vehicles.

Rhian told PEP, “Full Throttle is about motoring, and all about all sorts of vehicles—air, land, and sea.

“Most common being land and it’s been a lot of fun.

“It really, honestly, just feels like playing because they give us a vehicle and we go crazy.

“We just drive it around.”

The actress-host added, “We don’t get overly technical, this is definitely a show that can be enjoyed by car lovers, for sure, but also yung mga hindi pa, we can make a car lover out of you.”

Full Throttle is scheduled to air its pilot episode on August 8, Saturday, at 5 p.m. on the History Channel.

FULL THROTTLE. What can audiences expect from their new show?

Rhian answered, “It will also feature quite a bit of driving by me and Sam but also, we have guests that are also amazing drivers.

“My boyfriend was in one of the episodes and he was drifting.

“My friend, Michelle Bumgarner, amazing racecar driver and she was in one of the episodes.

“We have Manny Pacquiao talking about you know, how he feels about all his cars because he does have quite a few.”

Aside from their special guests, Rhian and Sam will also go head-to-head on challenges they have to go through in each episode.

Rhian said, “They pit us against each other in challenges that include cars and other vehicles.

“And we battle it out. Most of the time, I win.

In one of their challenges, Rhian and Sam had to race up to Mt. Pinatubo while driving a utility terrain vehicle (UTV) called the Polaris.

The lead star of The Richman’s Daughter recounted, “We raced on it and there were challenges on the way, so we would race the next station on the thing.

“So far, that’s my favorite challenge.”

Another challenge they had to complete was the food truck challenge. Rhian and Sam had to race around Luneta Park and serve around 20 to 30 people the food they prepared while racing.

They also had to play soccer with a twist as part of another challenge. The Full Throttle hosts had to play it while riding high-end cars.

Rhian said, “There was this big inflatable soccer ball and we would use the cars parang yun yung pang-sipa.”

Sam told PEP that he enjoyed doing the activities and the challenges they to go through that he did for the first time.

“Tapos mga mahal na kotse to. Andami, everything is a first for me.

“Every episode, it gets crazier and crazier and hindi nga namin alam, e, kung ano yung next episode.

“I guess ano lang, I love adventure, I love extreme sports and I’m one of those guys na palaging game.”

FEEL THE PRESSURE. Sam admitted that he felt the pressure of hosting History Channel’s first-ever locally produced show that will also be shown around Asia.

Sam explained, “Of course, there’s added pressure. You know, you’re catering not just to the Philippine audience because you’re gonna be catering to Asian audience.

“Whatever we’re doing, whatever we’re seeing has to be appealing not just to Philippine audience but to everyone who’s actually watching the show.”

On the other hand, Rhian thinks about it more as a challenge.

She said, “I wouldn’t naman say pressure. Sometimes, I forget to speak in complete English, believe it or not.

“So it’s just that pero in terms of pressure, hindi naman gaano.

“I’m really, really happy with the way the show turned out.

“We have so much fun shooting it and I feel like lumalabas din siya sa product namin.”