ON THE SET: "Astigs" two-part finale in CamSur 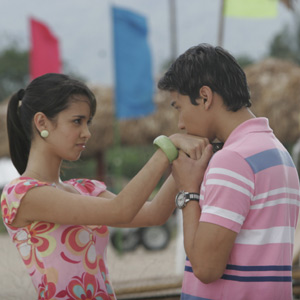 After a couple of title and cast changes, ABS-CBN's developmental show titled Astigs will finally bid farewell this May. The show's two-part finale, shot in Camarines Sur, will be aired on May 3 and 10. In this scene, Ipe (Enchong Dee) has a heart-to-heart talk with Janine (Megan Young).

Last April 18 to 20, the entire Astigs cast and crew stayed in Camarines Sur to tape the concluding episode of the program touted as a developmental show of the Kapamilya Network. This two-part concluding episode will be aired on ABS-CBN on May 3 and 10.

The Astigs concluding episode was shot in scenic Camarines Sur upon the invitation of CamSur governor L-Ray Villafuerte. Aside from the shooting itself, the cast and crew had a field day with wakeboarding at the CamSur Watersports Complex (CWC).

With the end of the show, viewers will say goodbye to the barkada of the A.S.T.I.G.s composed of Andoy (Dino Imperial), Sean (Chris Gutierrez), Tyler (AJ Perez), Ipe (Enchong Dee), and Galo (Angelo Patrimonio).

DIRECTOR'S NOTES. Don't let all the exuberant spirit of the cast fool you. Truth is, despite all the laughter and juvenile activities going on, doing a youth-oriented show like ABS-CBN's Astigs is all hard work, patience and headaches.

Sharing directorial duties are Jojo Saguin and Erik Salud who have the task of overseeing more than a dozen teen stars and making sure that everyone adheres to their vision for the program.

Despite the "kakulitan" of the young stars, both directors praised them for their dedication and willingness to learn all throughout.


CULTIVATING TALENTS. Astigs, as explained by Direk Jojo, incorporates a wide range of topics commonly faced by young people. Certainly there is that element of love, as well as friendship, peer pressure, adolescent issues, and family concerns.

As the show draws to a close, everyone expressed relief but most of all sadness. For the young stars, they would definitely miss each other's company. For the directors and the entire creative team, they are hoping that the passion shown by the youngsters would continue to shine.

Guiding a bunch of aspiring actors is a tough job considering their tender age and immaturity. Having diverse backgrounds is another consideration.

But after months of continuous workshops and acting in front of the camera, both directors acknowledged the marked improvement shown by the kids. That alone is a great achievement.

Click HERE to view behind-the-scenes photos of Astigs at the CamSur Watersports Complex.