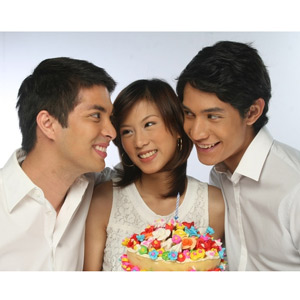 (From left) Joross Gamboa, Alex Gonzaga, and Victor Basa play a comic love triangle in Your Song Presents: Without You. The show airs for a month every Sunday afternoon starting May 4.

Star Magic talent Victor Basa is not afraid of being typecast as a gay character. He believes the audience is mature enough to differentiate reality from fiction. The alumnus of Pinoy Big Brother Celebrity Edition 2 told PEP (Philippine Entertainment Portal) that he did not hesitate to accept this role, especially since he's the one being pursued in the story of Your Song, which airs starting today, May 4.

SYNOPSIS. Bobby (Joross Gamboa) falls in love at first sight with John (Victor Basa). The problem: Jen (Alex Gonzaga) is in love with Bobby, and the bigger problem, Jen is the sister of John!

Bobby is a Culinary Arts graduate and restaurant chef. John is a Law graduate who has already taken the Bar Exams, and unfortunately, failed twice, so he needs to take it again. Jen is the sweet, caring, and loving sister of John.

Bobby will do everything just to get John's attention and Jen will stop at nothing till she gets Bobby's heart. She always gives gifts and bakes something for Bobby. Little do they know that they're consulting the same article in a magazine about capturing someone's heart.

Who will win in this bizarre love triangle? Is there really a loser in love?

For Jen and John, what will they choose—the love for their sibling or the love they feel for somebody special?

These three young stars were handpicked for this story because Joross and Victor have been commended for their portrayal of gay roles in the past. Alex Gonzaga has proven to be a versatile actress who is effective in both drama and comedy.

Under the direction of Manny Palo, watch an intriguing, and exciting story of love between Joross Gamboa, Alex Gonzaga, and Victor Basa in Your Song Presents: Without You. This mini-series features the theme song, "Here I Am" by Erik Santos. Your Song also stars Noel Colet, Lui Villaruz, Carla Humphries, Aloy Norona, and Nina Dolino.

Your Song Presents: Without You airs May 4 after ASAP '08 on ABS-CBN.