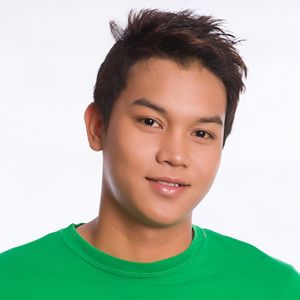 Jolas (in photo), the Gentle Giant of Pinoy Big Brother Teen Edition Plus, was evicted last Saturday, May 3. For this week, Josef, Nicole, and Rona are nominated for eviction.

The teen housemate known as the Gentle Giant of Pinoy Big Brother Teen Edition Plus received the lowest number of text and Internet votes after a week-long voting period which started last April 27.

As a result of Jolas's eviction, his dad and assigned Guardian Ike was also evicted from the house and taken out of the running to be part of the Guardian Big Four in which he could win up to P500,000.

Once outside the PBB house, the father and son were greeted by the cheering crowd of spectators who watched the live eviction-night program hosted by Toni Gonzaga and Mariel Rodriguez.

Toni revealed that the breakdown of the percentage of gathered votes showed that Jolas only received 8.66% of the total amount of text and Internet votes. As for his fellow nominees, Dumaguete native Rona got 17.09%, Lethal Lasallite and 3-time nominee Josef got 29.43%, and True Blue Atenista Robi got the lion's share of votes with 44.82%.

Jolas was also treated to a special video tribute chronicling his stay in the Pinoy Big Brother house. Some of the highlights showed how the Bulacan native celebrated his 19th birthday in the house last April 24. As a special gift, Big Brother even invited PBA cagers James Yap and Peter June Simon of the Purefoods Tender Juicy Giants to play a 2-on-2 game with Jolas and Daddy Ike.

After winning the game, both James and Peter agreed that Jolas has the potential to make it big in professional basketball. The video ended with an inspiring message for Jolas to reach for his dreams.


HOUSE PLAYER NG BAYAN. After Saturday's tearful farewell to Jolas, the following night saw a surprising addition to the game. What was supposed to be the 5th nomination night was postponed for the entry of a brand new teen inside the Pinoy Big Brother house.

In a special program hosted by Luis Manzano and Mariel Rodriguez, viewers got the chance to meet the much-talked-about House Player ng Bayan.

Wearing a sequined mask and clad in yellow, the teen was revealed to be a girl named Shy. Her entry is Big Brother's latest "plus" to the game in order to make it more interactive with the viewers.

The move was inspired by the 8th season of the American version of Big Brother. There, 28-year old theater company owner Eric Scott Stein was called upon as "America's Player."

During his stay in the house, Eric was given tasks as dictated by the text and Internet votes of viewers. For each task he successfully completed, Eric would be rewarded $10,000.

In Shy's case, she would be given five different tasks to complete during the week and for every task she successfully completes, she would receive Php10,000. Her first task upon her entry to the house involved convincing her fellow housemates that she has a crush on one of the male housemates.

That male housemate was decided through text voting, which ran during the night's program. In the end, majority of the texters voted for Josef to be part of Shy's first task.

THREE NOMINEES. As for yesterday's 5th nomination night, Mariel Rodriguez and Bianca Gonzalez had the task of bringing the bad news to the teen housmates during the primetime episode of Pinoy Big Brother Teen Edition Plus.

The only teens who had no need to worry were Nan, who won the immunity game thanks to his Guardian and mom My Love, and of course, Shy since she just entered the house the day before.

After the voting that happened among the housemates and the Guardians, Bianca revealed that the new set of nominees included three teens. She started with the one who got the highest number of votes from the Guardians. Josef is in the list of nominees for eviction since he received five points from the remaining six Guardians. This is the fourth non-consecutive time the Lethal Lasallite ended up in the list of nominated housemates.

Next to hear the unfortunate news was the In-chick of Cebu, Nicole. This is the second time the 17-year old was nominated for eviction, though she was saved the last time due to Kevin and Daddy John's voluntary exit last April 26. This time, she got 8 points from her fellow housemates.

The last teen housemate for this week is Rona. Just like Nicole, this is the Positive Girl of Dumaguete's second time to be nominated after she garnered 4 points.

How will Jolas's departure and Shy's entry affect the bonds that have developed among the teen housemates? How will Josef, Nicole, and Rona deal with their nomination? What will happen to Shy's other tasks inside the House?