ON THE SET: "Dyosa" in Calatagan, Batangas 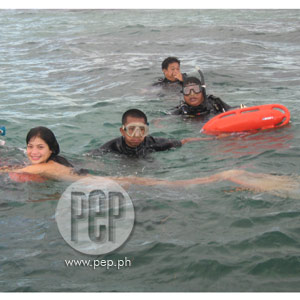 Anne Curtis spent around three hours in Ivory Beach in Calatagan, Batangas, to shoot underwater scenes for Dyosa. This fantaserye pairs her with Sam Milby, Luis Manzano, and Zanjoe Marudo.

Like the Greeks and the Romans, Filipinos have a colorful mythology filled with gods and goddesses who share the same feelings and frustrations as humans. See how opposing worlds of good (Kabaylan) and evil (Kasamyan) will be restored to balance by Dyosa—the goddess of the earth, sea and sky.

Anne Curtis stars in this fantaserye that pairs her again with Sam Milby after being known as Celine and JB in Maging Sino Ka Man Book 1 and 2. Aside from Sam, Dyosa will also be paired with demi-gods played by Luis Manzano and Zanjoe Marudo.

PEP (Philippine Entertainment Portal) visited Anne last Monday, May 5, when she had her first official taping day for Dyosa in Calatagan, Batangas. As early as 4 am, Anne was already making her way to Batangas to shoot with director Wenn Deramas.

Her first location was Aqua Farm wherein she shot scenes wearing her mermaid's tail. As the daughter of Bernardo Carpio and Maria Sinukuan, Dyosa has the ability to transform herself into a centaur, a mermaid, and an eagle, allowing her to have dominion over the earth, sea and sky.

How long ago was Dyosa conceptualized? According to Direk Wenn, the concept was presented to Anne last year.

To prepare for her underwater scenes as a mermaid, Anne had pool sessions to learn fin swimming and introductory scuba diving sessions.

Did she wear scuba gear?

"Hindi, e. I had to do skin diving, where you go down, wala kang tank pero you purge [air] from the regulator ng dive master. Ang hirap, di ba? Pero ang fun! I just had to learn the signals, kapag no more air, tapos okay, rolling. It's something different. Buti na lang hindi pa tag-ulan. It helps siguro that I'm really a beach person."

How hard were the underwater scenes?

"Siguro kasi I'm such a beach person, and sanay na ako trying to swim like a mermaid. Without a tail or a fin, kaya ko naman lumangoy na nakadikit lang. Because I've always wanted to portray a mermaid, it's so much fun for me under the water. Siguro you have to get used to the salt water sa mata. Pero okay naman, once you're down there. Yun lang, nagiging red yung eyes ko."

Wenn Deramas explains the kind of swimming that he wants to see from Anne.