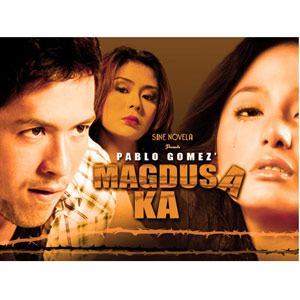 The movie Magdusa Ka is one of the most notable and well-celebrated movies that garnered numerous awards from various film organizations: Film Academy of the Philippines (FAP), Filipino Academy of the Movie Arts and Sciences (FAMAS), and Urian in 1986. The movie was directed by multi-awarded actor Eddie Garcia and had a powerhouse cast of dramatic actors: Dina Bonnevie, Christopher de Leon, Dindo Fernando, and Nida Blanca.

Aside from its compelling story, witness the bold character transformation of Katrina, Iwa, and Dennis in the series. Katrina, who became famous for her sexy villain roles, will play the lead role of a non-kontrabida as Christine, a character originally played by Dina Bonnevie in the movie. Dennis will evolve from a sweet boy-next-door to a tough, street-smart, playboy character named Rod, portrayed in the film by Christopher de Leon.

The story of Pablo Gomez's Magdusa Ka revolves around the life of Christine (Katrina Halili), a poor young waitress raised with love and care by her mother, Toyang (Rita Avila), a laundrywoman played in the movie by Nida Blanca. Christine is a loving daughter who dreams that all her sufferings and sacrifices will end one day. She is able to endure all hardships and pain with the help of her boyfriend, Rod (Dennis Trillo) who comforts her. But, unknown to Christine, Rod is an unfaithful, double-crossing jeepney driver.

Christine's colorful days with Rod soon end when Toyang discovers her daughter's secret relationship with the jeepney driver. Toyang throws Christine out of the house for her disobedience.

Christine thinks that she will be happy with Rod. But after several days of living-in with her boyfriend, she ends up with more hurt and pain. Christine runs to her rich father for help. In return, Bernardo (Gardo Versoza) asks Christine to live with him in the mansion.

Hoping to live a more convenient life, Christine consents. In the mansion, she meets Bernardo's scheming wife Olivia (Jackie Lou Blanco) and her daughter Millet (Iwa Moto). The two women of the mansion connive to get hold of the family wealth that they covet. They will not allow Christine to inherit any of the riches of Bernardo's family.

Christine's new life of affluence will push Rod to return to his wealthy father Gerry (Emilio Garcia) and demand what is rightfully his. Rod detests wealthy people because his father once abandoned him and his mother. His resentment worsens when he meets Roland (Gabby Eigenmann), his half-brother who enjoys the wealth he is supposed to be enjoying as well. But now that Christine is rich, he too must change his lifestyle to prove his love to her.

With Rod and Toyang away from her, will Christine be able to endure all the pain inflicted by Millet? Will Toyang accept Christine if she returns to her for help and refuge? Will Rod finally get the convenient life he demands from his father? And in reaching for one's dreams, do they really have to suffer? Will true love lead Christine back to Rod's arms?