Jessica Sanchez records duet with Christian Bautista; describes him as the "sweetest guy" 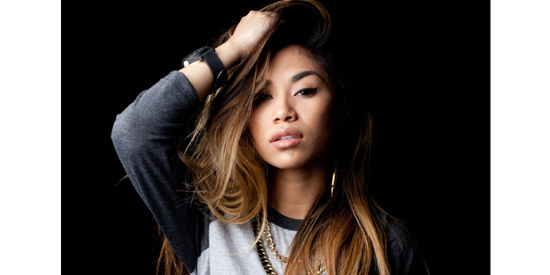 Jessica Sanchez shares what she'll be singing during her special appearance for the August 9 pilot episode of GMA-7's Sunday PinaSaya: “They asked me about that this morning, after my flight, like there were camera crews and they asked me, ‘What song will you be doing other than the Christian Bautista song?’ I just said I wanted it to be a surprise.”

“I just arrived this morning and it’s been kinda crazy day and I’m having fun so far.

“I’m very excited to be here, I’m excited to be on GMA on Sunday and I’m also excited for my concert at Chaos, City of Dreams, also on Sunday,” kuwento pa ng American Idol Season 11 runner-up.

“I was very excited!

“Me and Christian recorded a song in L.A. a couple of months ago.

“It’s his new single called 'Two Forevers' and it’s a duet and we will be performing it on GMA this Sunday [on Sunday PinaSaya] and also at my City of Dreams concert later that night.”

“They asked me about that this morning, after my flight, like there were camera crews and they asked me, ‘What song will you be doing other than the Christian Bautista song?’

“I just said I wanted it to be a surprise,” lahad niya.

“I don’t know, like I don’t really watch a lot of Filipino TV back in America but I know he comes out on TV but he is like the sweetest guy!

“And he’s so funny! I love working with him. He has an awesome voice and the song came out great so I’m really excited to be back here and spend time with him and it’s gonna be awesome,” pagpuri niya.

“It’s good! I’ve been in the studio working with various producers and working on songs and just really like getting the sound together and just perfecting everything.

“All I can say is I’ve been in the studio, I’m working on music and I just want everything to be perfect when the music does comes out,” dagdag pa ni Jessica.

“Yeah. I did a lot of ballads on the show because it’s a singing competition so I had to show off my voice, you know.

“The ballads are like Celine Dion and stuff, and about loving and all that stuff.

“And I’m young so I still have like, mistakes that I can sing about, you know, just being young, crazy, so that’s what I wanna sing about,” at tumawa si Jessica.

Pag-amin niya, “It’s kinda sad because that’s kinda like my home, it was like, kinda like my platform, I guess. I’ve made a lot of memories during that experience being on that show.

“I made a lot of friends, I learned a lot from that show, it’s like boot camp for me.

“So yeah, it was like boot camp. I’m gonna miss the staff, the judges, the contestants, like all the lessons that you learned on it.

“It’s awesome and I’m gonna miss the show, so yeah.”

“Yeah coz the show’s been going on for such a long time, yeah. But I know there last season is gonna be a great one so I’m excited for it,” pahabol din niya.

“I would love to!

“I love the Philippines but right now I have a lot of stuff, you know, like all the material back in the States. I just want to perfect that and work over there.

“And then as soon as you know, I’m established out there I’m definitely coming and visiting the Philippines more often, that’s my plan,” lahad din niya.