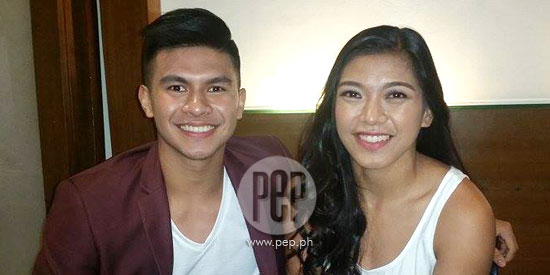 UAAP star athletes Kiefer Ravena and Alyssa Valdez are excited to give viewers a glimpse of their life on and off the court via Digital5's reality lifestyle show, Phenoms. The webisodes can be viewed online beginning August 24, 2015.

Two of the star athletes of University Athletic Association of the Philippines (UAAP), Kiefer Ravena and Alyssa Valdez are all set to give their fans a closer look to their hardcore training and off-the-court activities via the online reality lifestyle show called Phenoms.

Both are student-athletes of Ateneo De Manila University, with Kiefer playing as guard for Blue Eagles while Alyssa as Lady Eagles’ volleyball player.

Slated to run for three months, the Phenoms webisodes will be launched via Digital5 (TV5's online entertainment arm) starting August 24.

“Sobrang excited kami to have our own online show,” said Kiefer in an interview with PEP.ph (Philippine Entertainment Portal) at the August 11 press launch of Phenoms.

“We’re blessed with the opportunity interact with our fans [and] to show probably a different side to what they’re used to seeing us doing,” he added.

According to Kiefer, not many people know that he and Alyssa are close friends since they started college in Ateneo.

The story of their friendship is one of the things that they’re looking forward to share with avid UAAP fans in Phenoms.

“Marami kaming pinagsamahan na siguro I think people would also find out, na masi-share namin with them together.

So far, the two have already taped four webisodes, the first of which will showcase of Q&A portion with their fans.

Alyssa also gave a clue on what viewers would discover about Kiefer on Phenoms.

Both Kiefer and Alyssa also hope to inspire young viewers to dream big and have the right mindset to fulfill what they want to be in life.

To which Kiefer added, “This show will also feature those things na puwede mo magawa to make the right steps in becoming a good athlete.”

When asked what it takes to be a star student-athlete like him, the 21-year-old basketball player said that it’s really about having a good sense of discipline on and off the court.

“Kung mahal mo yung ginagawa mo, you won’t get tired of doing it.

“Of course, also, as elite athletes, yung puhunan namin is yung katawan namin. So we have to prepare our bodies to be able to perform at a very high level.”

As for dealing with tough competition, Alyssa said that she takes rivalry issues as a motivation for her to be better in her sport.

“Balance lang—kung may criticism and may compliment also.”

Aside from Phenoms, Kiefer is part of TV5’s weekly sitcom No Harm No Foul. It also topbills Eula Caballero, Sophie Albert, Ogie Alcasid, and Randy Santiago to name a few.

LOOK: Meet stars of TV5 sitcom No Harm No Foul

Even if he recently dabbled into show business, Kiefer stressed that basketball remains to be his top priority.

“I think we still have to perform good sa sports namin for things like these to come in,” Kiefer stated.