Kris Aquino graces "Deal or No Deal" episode aired in the U.S. 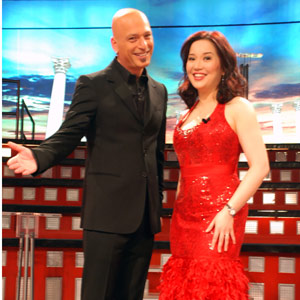 Howie Mandel (left) introduced his Philippine counterpart Kris Aquino (right) to American viewers as the daughter of former Philippine president Corazon Aquino. ABS-CBN has acquired the rights to air the episode from Endemol USA and will soon announce the telecast date.

Kris Aquino recently introduced her signature move for Kapamilya Deal or No Deal to American viewers. The ABS-CBN star taught Deal or No Deal US edition host Howie Mandel to use a thumbs up sign to indicate deal and an X-sign when signifying a no deal. Kris' gesture is one of the striking differences between the Philippines and the U.S. version and was even used by the American contestants.

Wearing a red gown created by Pepsi Herrera, Kris was introduced by Howie as the daughter of former Philippine president Corazon Aquino and mentioned that the Philippine airport is named after Kris's father. To this, the TV host-actress added, "Have you seen our money [P500 peso bill]? My dad's picture is on it."

The special episode titled Deal or No Deal - Around the World Philippines was shown in NBC in the United States. This allowed Americans to see how their hit game show is played the Kapamilya way.

Host Howie Mandel and Endemol USA marveled at how the Filipina 26K girls strut, carrying their briefcases, and the party atmosphere created by the lively and enthusiastic Pinoy audience that cheered and danced when briefcases containing low prizes were eliminated.

"Here in the Philippines, the people party!" exclaimed Howie during the taping of the special episode held at the ABS-CBN studio last April 24.

The Philippines is one of three countries chosen to be part of the show's world tour. Originally scheduled to be aired on May 7, the Philippine episode turned out so good that the producers decided to air last May 5 ahead of the Estonian and the South African episodes.

ABS-CBN Business Unit Head Alou Almaden, who led the team that produced Kapamilya, Deal or No Deal and the special around-the-world episode, announced that the network has acquired the rights to air the episode from Endemol USA and will soon announce the telecast date.

"Being part of the world tour series is not only a testament to the creativity and ingenuity of the ABS-CBN production, but it is also an honor for the Philippines as it shows our capability in producing a world-class TV program," she said.

The 26K girls swayed gracefully on stage, carrying the briefcases containing prizes ranging from a penny to the jackpot $1 million. Kris called out their names when their briefcases were picked and warned the American contestants about Charmel as the girl who usually carries the briefcase with the big prize.

Like in Kapamilya, Deal or No Deal, the live audience broke into pandemonium, cheered, and danced whenever a briefcase with a small prize was eliminated. The energy level was so high that even the Americans danced on the floor.

The two-hour episode, which was taped in ABS-CBN studio last April 24, showed Howie arriving at the Ninoy Aquino International Airport, taking the pedicab with the 26K girls, visiting Quiapo, and posing as a promo boy at a supermarket.

Howie learned a few Filipino words from Kris like "pare" in addressing a male friend and "buksan mo na" when asking a 26K girl to open the briefcase. He assisted two American contestants, who flew with their family members, in playing the numbers game following the Philippine version's rules.

The first contestant, Mike Levy, loved the local food, specifically sisig. This Pinoy dish is made of chopped pork ears served on a sizzling platter with chili, liver, and seasoned with calamansi. He was given a headgear made of natural fiber that is worn by the people of Batanes. The second contestant, Patrick Hook, was given a food challenge mid-way, wherein he would eat chicken legs, fish eyes, or balut in order to increase the Banker's offer.

At the end of the taping, Howie thanked the Filipino people profusely for the hospitality extended to him and his production crew during his stay and the audience for their enthusiasm.

Deal or No Deal - Around the World Philippines was produced by ABS-CBN under Almaden's business unit with Bobet Vidanes as director and Morly Nueva as executive producer.