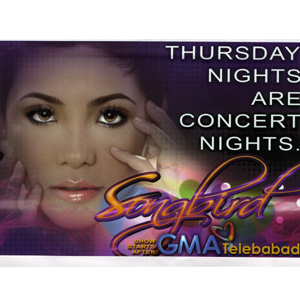 After having signed an exclusive contract in GMA-7, Asia's Songbird Regine Velasquez takes late-night viewing to a whole new level through her newest concert show titled Songbird. This 45-minute musical extravaganza starts airing this Thursday, May 15.

The show will certainly bring back memories by paying homage to the veterans in the music industry. In Songbird, Regine will sing her own versions of well-loved classics from seasoned foreign artists such as Barbra Streisand, Celine Dion, Barry Manilow, as well as local singers such as Ogie Alcasid, Rey Valera, Ryan Cayabyab, and George Canseco.

Songbird, which aims to provide a more relaxing Thursday night, seeks to give the audience a breather from the usual genre of shows airing on the primetime block. Compared to its predecessors—the weekly drama anthology Magpakailanman and the thriller E.S.P.—Songbird is a lighter take on nighttime viewing as it brings audiences to the fun and relaxing concert atmosphere with Asia's Songbird herself.

"Nakakatuwa po siya, kasi thematic po siya," said Regine, when asked about the concept of her show. "Every week, there's a different theme, we feature different artists, songwriters, genre; we even do movie themes. So every week is different. We also have different guests for each week, depending on what theme ang meron sa week na ‘yon. Ibinabagay rin po namin ang aming guests."

One of Regine's guests on her pilot episode will be Richard Gomez, her co-star in the movie Pangarap Ko ang Ibigin Ka and in the television drama Forever in My Heart. In Songbird, Regine gets to choose the artists who will grace her weekly guest list.

Aside from the usual impressive repertoire, Songbird also showcases a grand stage design with LED curtain as backdrop that projects spectacular images, sceneries, and moving graphics.

Since the show will be having a different theme each week, Songbird will get to showcase a slew of musical treats such as orchestra performances, Broadway musical festivals, song requests from letter-senders, and even stand-up musical comedies.

Songbird starts serenading audiences on Thursday, May 15, at 11:00 p.m. after the GMA-7 Koreanovela The Legend.