24 hopefuls make it to the third round of "Pinoy Idol" 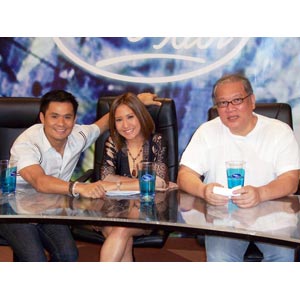 As the Idol hopefuls were placed on the hot seat, the three judges (from left) Ogie Alcasid, Jolina Magdangal, and Wyngard Tracy gave their share of praise and criticism. The 24 semi-finalists made it through while six contestants had to leave and end their Pinoy Idol journey.

The search for the ultimate Pinoy Idol continues as judges Ogie Alcasid, Jolina Magdangal, and Wyngard Tracy handpicked 24 hopefuls from a roster of 45 talents during the third elimination round of the reality singing competition. Held at SM North Edsa Cinema 6 and aired on the May 17 episode of Pinoy Idol, each of the 45 contestants were tasked to perform a solo number.

The tension proved to be too much for some of the contestants who were clearly nervous and even forgot the lyrics of their chosen songs. Jolina pointed out that this was the time for the contestants to give their best and prove themselves worthy of making it to the Top 24.

After a mix of good and not-so good musical performances by the contestants, the three judges chose who deserved to move on to the next round. For the third elimination round, the judges divided the 45 contestants into three groups, each made up of 15 members. Of these, two groups would have a chance to make it to the Top 24, and eventually snag the much-coveted title as the first Pinoy Idol.

The three groups were assigned to different rooms where they waited for the news.

Wyngard Tracy congratulated the first group for making it to the next round, an announcement that was received with much glee. Jolina also had good news for the second group who would also continue to be part of Pinoy Idol.

It was Ogie who had to end the Idol journey for the remaining 15 contestants. The atmosphere in the room was filled with tension as the Idol hopefuls waited for the singer-composer to deliver the news.

"We're so proud of you [kasi] napaka-suwerte ninyo na naging bahagi kayo ng history," Ogie paused. "But tonight is your last night. I hope this experience had been good for you for the most part, because this is very valuable. It's not the end of your musical journey."

WALK TO FAME. The remaining 30 contestants stayed in the holding room where they waited for their turn to face the judges, and to hear whether or not they made it to the Top 24.

From the holding room, each contestant rode the elevator and walked through a long hallway to a large room where the three judges waited. A wannabe Idol would sit on the chair in the middle of the room and listen to the judges' critique of his or her performance so far. Selection was based on the performance of the contestants from day one of the auditions up to the third elimination round.

Most of those who made it to the final cut were given an Idol name, a shortened or altered version of their real names, to allow for fast recall and to make it easy for viewers to text in the names of the contestants come voting time.

The six Idol hopefuls who were originally part of the lucky 30, but did not make the final cut were: Aurora Nanza, Jim Joseph Lacson, Kurt David Mercado, Alcelyn Monteras, Loverine Fermino, and Daryll Ong.

Next week, experts from the entertainment industry will take charge of the 24 potential singing stars and will groom them to become the first Pinoy Idol. With the contestants' first live performance, the Top 24 will battle it out on stage as voting will be opened to viewers so that they can show their support for their favorite singers.