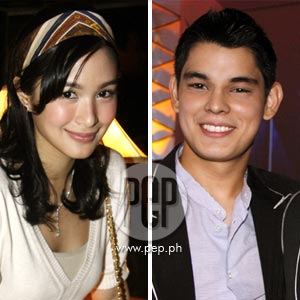 After exploring magical realms in the primetime fantaserye Kamandag, matinee idol Richard Gutierrez now conquers the sandy dunes of Dubai as he shoots the pilot week of Codename: Asero. GMA-7's newest star Heart Evangelista is his leading lady for this this upcoming action-drama series.

In an exclusive interview with John "Sweet" Lapus for Showbiz Central last May 18, Richard said that everything "has been one great experience for all of [them] kasi kahit mahirap yung trabaho, lahat nag-e-enjoy."

The 24-year-old Kapuso star also says that viewers of Asero could expect one-of-a-kind visual effects from the show.

"We wanted to start the show with something different visually," explains the young actor when asked why they selected Dubai as their location. "We wanted to highlight the desert, the dunes of Dubai, kasi it's never been done on TV. Yung talagang maganda, kahit mahirap."

And true enough, shooting Asero was no easy task. In fact, one scene that will air for only five minutes on the show took the whole cast and crew four days to film.

Richard adds, "talagang mahirap pero sobrang ganda nung eksena namin." He pointed out that they will showcase martial arts techniques in the form of aikido, a Japanese fighting style that makes skillful use of defensive movements.

Given Richard's wide fan base, what could kids expect from Asero?

HEART OF THE SHOW. Richard admitted in Showbiz Central that his leading lady Heart Evangelista is the one to watch for in this new TV series.

While shooting Asero, it was revealed that Richard once had to carry Heart through the desert because of the scorching heat of the sand dunes. "Kasi naka-tsinelas lang siya, so I had to carry her," he explains.

Richard also admitted that he is doing his best to cheer up his co-star, especially now that she is recovering from a much-publicized breakup with former beau Jericho Rosales.

Heart, who has forged a friendship with the young actor, also has wonderful words for her leading man.