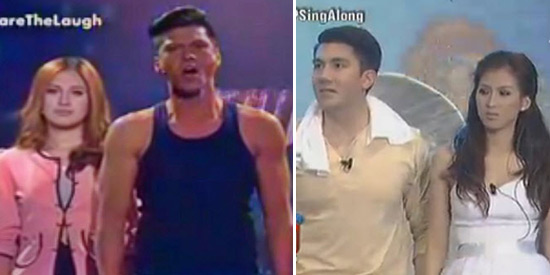 Jerald Napoles and Julie Anne San Jose (left frame) are seen in the "Kantaserye" segment of Sunday Pinasaya. Meanwhile, Luis Manzano and Alex Gonzaga were part of the "Doble Karakaraka" segment of ASAP 20.

“What has happened to the noontime shows on Sunday????”

This question came from the Twitter account of Martin Nievera, one of the pillars of ABS-CBN’s flagship Sunday program ASAP (titled ASAP 20 this 2015 in celebration of its 20th anniversary).

That tweet was fired barely days after the launch of a rival show on GMA-7, Sunday Pinasaya. Many Netizens viewed the post as a way of Nievera pointing out that ASAP, Sunday noontime giant and entertainment legend, appears to be affected by the coming of a newbie.

Is the previously unshakeable ASAP adjusting to the format of a newcomer by adding in musical skits and games to its weekly lineup?

Has the two-decade old show (which has seen three competing shows from GMA-7 bow out over the years) finally met its match?

TWO DECADES OF ENTERTAINMENT. For years, ASAP has been the gold standard in musical variety shows. There were attempts to duplicate its format and style by GMA-7 and even TV5, but there is simply no easy way to match its star power, the strength of its hyperconnected fans from all over the world, and its commercial viability.

For years, other TV networks fought fire with fire. To beat ASAP, they created their own elaborate opening musical numbers featuring a barrage of the network’s top talents, vocal battles between the country’s leading names in music, covers of whatever's topping the music charts and death-defying dance numbers complete with set surprises, props, and an army of backup dancers.

GMA-7 has had three casualties in the precious Sunday noontime war – SOP, Party Pilipinas and Sunday All Stars. To be fair to the Kapuso Network, these three shows weren't all eclipsed by ASAP.

SOP alone had its fine moments (like the legendary Back-to-Back-to-Back segment, which in a way influenced how ASAP presented its big vocal numbers) and for years, the Kapuso show strongly held its ground against the competition.

But as they say, if you keep doing the same things, do not expect different results. After ending three musical variety shows that all promised concert-like experiences on TV, GMA (with the help of long-time noontime blocktimer TAPE) decided to just take another route, miles away from the ASAP highway. And so Sunday PINASAya was born.

MATERIAL MATTERS. Sunday Pinasaya is clear with its intention: it is a comedy show that just happened to air on Sundays at 12 noon. Just when we thought Filipino audiences just want to see musical performers at this time slot, Sunday Pinasaya is now attracting a different set of viewers who want something different.

For starters, the new Kapuso show cast comedians like Ai-Ai delas Alas and artists who are not the typical concert performers such as Jose Manalo, Wally Bayola, and Marian Rivera to lead the fledgling show.

Still basking in its AlDub jackpot glow, TAPE exported its brand of humor to the concert TV timeslot and disrupted the status quo. Suddenly, Sundays are no longer just for Hollywood, Vegas or even K-pop type of production numbers. We are going back to basics, in the style of town fiestas, dula, and zarzuela and standup comic shows.

Many are quick to label Sunday Pinasaya as baduy or bakya or a show that dumbs down the audience used to world-class performances. But beyond the surface, the show has succeeded in several aspects it unapologetically embraced.

The strength of Sunday Pinasaya now lies in presenting original content and conceptualized materials to an audience it consciously selected and differentiated from ASAP’s cool crowd. Each host has a skit or segment (Marian has Judge MD, Alden Richards has Chef Boy Next Door) that he or she is in charge of weekly, and you can see that each segment has been conceptualized, written, and rehearsed strategically to appeal to a specific market.

Sunday Pinasaya is like several musicals or plays performed as live comedy sketches every episode, in front of a live audience. Think Saturday Night Live but adapted to Filipino sensibilities.

The hosts perform as different characters, in support of the lead actor for every sketch. There are also guest actors who join the ensemble in building the sketches (for this week, it’s the very game Cherie Gil).

Music is still a key element of the show, but humor and entertainment come first. During this week's episode, musical guests were also present to sing their very own OPM hits (Jireh Lim and Bassilyo jammed with Julie Anne San Jose). Clearly, this show strives to thrive on local flavor, forgetting the old formula of trying to level up to international or Western influences of entertainment.

THE ASAP STANDARD. That, on the other hand is ASAP's strength. Its performers, choreographers, musical directors, and production designers are able to mirror worldwide trends in music and pop culture. ASAP has a strong and smart sense of musicality and artistry.

The best part of ASAP is whenever it elevates the music experience—and it does it well with excellent storytelling through words and visuals. In the August 30 episode, the show paid tribute to music legend Hajji Alejandro and the songs of Sheryn Regis. It gave airtime to Maja Salvador’s new catchy single. It’s all about the music.

But now, with ASAP experimenting with its format (indirectly quoting Nievera's Twitter feed this time), it is easy to see similarities between the two Sunday noontime shows.

This week for instance, ASAP had “Doble Karakaraka,” a musical comedy sketch that can go head to head against Sunday Pinasaya's “Kantaserye.”

The "Kantaserye" segment of Sunday Pinasaya is polished and were miticulously choreographed. It helps a lot that Jerald Napoles (of Rak of Aegis fame) is tapped to play the lead character as his comedic and singing skills have been honed by his experience onstage.

Both ASAP and Sunday Pinasaya have music-related games participated in by two competing teams.

Does an established show like ASAP need to implement all of these changes?

Some online fans have gone so far as to say that this is stooping down to the newbie's level.

If the goal is to capture a greater part of the audience, then the answer is yes. Clearly, there is a market for whatever Sunday Pinasaya is selling, and it’s well within’s ASAP’s rights and capability to get a chunk of this new group, or to get back those slowly moving to the other side.

TAKING COMEDY SERIOUSLY. As mentioned earlier, ASAP fans are some of the most tech-savvy and connected fans (ergo, the effectiveness of the ASAP “Chillout” segment), and this can be a double edged sword.

ASAP's competition is no longer just whatever GMA-7 churns out.

In this digital age, ASAP is competing with the whole of the Internet. Why watch a singer (or a non-singer) perform and dance like Ariana Grande, Nicki Minaj, or Sia when you can easily watch the real ones online? Yes, ASAP is so much in tune with worldwide trends but it must also offer what the Internet doesn't have.

If ASAP needs to produce more comedy sketches and original content with Filipino flavor to address that then its fans shouldn't go ballistic about it because in the end, it's still good for the show.

We just hope that ASAP does this with the same excellence and flair it gives its “serious” production numbers—stop doing it half-heartedly and just go all-out. It pains some fans to see ASAP's precious minutes (some performers wait a lifetime for seconds on the ASAP stage) wasted by sketches not taken seriously and executed poorly. There are missed cues and performers overlapping as if they hadn’t rehearsed properly. Negi (who played the mermaid mother) can even be heard muttering, “Mali na naman ako.”

Alex Gonzaga was tapped to impersonate Ariana Grande and she simply let herself be carried by backup dancers, without even trying to sing the lyrics properly. Luis Manzano and Alex sang out of tune and the actress simply dismissed it by saying, “Wala sa tono.”

Having fun and comedy in a venerable TV institution like ASAP is not bad; just don't forget that comedy, too, should be performed with respect and dignity.

And that's exactly how Sunday Pinasaya is treating its brand of comedy, and its audience.

For this reason, this newbie show should be lauded for rocking the boat and changing the game. In the end, variety is always good.

It’s a great time for TV programming when Pinoy viewers are given choices. And it’s up to us to choose, what kind of entertainment we want, and what kind we deserve.

PEPsters, what can you say about the changes implemented on ASAP? What elements about Sunday Pinasaya do you like the most?