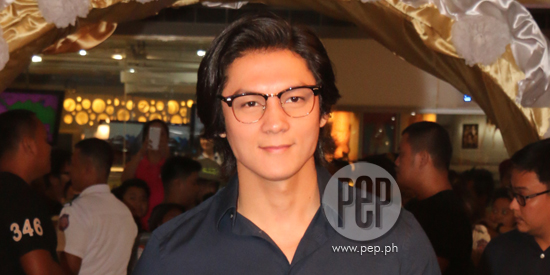 Pasion de Amor star Joseph Marco encourages viewers to tune in to their show as it enters its second book.

The ABS-CBN show started airing last June 1, and is currently on its 13th week.

In an interview with PEP.ph (Philippine Entertainment Portal) and other reporters during the premiere night of Ex With Benefits, Joseph said that changes will occur as the show enters a new chapter.

In the teleserye, he plays Franco Samonte, the youngest brother of Juan and Oscar Samonte, played by Jake Cuenca and Ejay Falcon, respectively.

SUPPORTING COLEEN. Joseph showed support for Coleen when she starred in her launching movie, Ex With Benefits.

According to him, he is very happy that Coleen already got her big break on the big screen.

WORKING WITH WENDELL. Another new addition to Pasion de Amor is Wendell Ramos.

The project marks Wendell’s first teleserye as a Kapamilya.

In the teleserye, Wendell is cast as Gabriel, the half-brother of the Elizondos who are making the Samontes' lives a living hell.

But contrary to their characters, Joseph is happy working with Wendell in real life.

However this 2015, he won't be joining the Cosmo hunks so he can focus on Pasion de Amor.