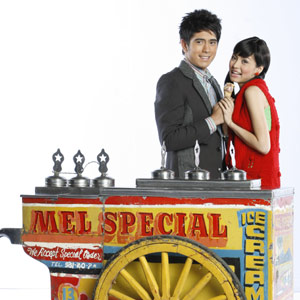 The love team of Kim Chiu and Gerald Anderson will once again be put to test through ABS-CBN's take on the highly popular Koreanovela, My Girl. This romantic comedy starts airing on Monday, May 26.

The creative team behind the local franchise of the popular Koreanovela My Girl took the liberty of adapting the hit show suit to the taste and culture of Filipinos.

"In the contract, we were allowed to change it to the point na dapat ma-Filipinize siya, dapat iakma lang sa culture ng Pilipinas because magkaiba ang culture ng Koreano at Pinoy," My Girl co-director Jerome Pobocan informed PEP (Philippine Entertainment Portal) in an interview last May 22 after the press preview held at the Studio 1 of ABS-CBN.

The location settings for My Girl are, of course, familiar to Filipinos — Luneta, Antipolo, Zambales, Tagaytay, and other places.

Direk Pobocan added, "We really adapted it to the Philippine situation and [formulated it] the way ABS-CBN comes up with a teleserye. ‘Yong formula ng ABS sa paggawa ng teleserye, inapply namin dito, plus the fact that we lightened up para magmarka ‘yong essence ng totoong My Girl."

KIMERALD. Leading the cast of My Girl is Kim Chiu who portrays the role of Jasmine, a spunky, street-smart and charming jack-of-all trades heroine. Starring with Kim is her love-team partner Gerald Anderson, who plays the well-off, serious and educated Julian.

My Girl follows the story of Jasmine whose poor fortune suddenly changes when she is hired to pretend as Julian's long lost cousin. Jasmine's role takes a sudden turn when she realizes that she is falling in love with Julian. The feeling, it turns out, is mutual. Problem is, the lovers can't come out in the open since everyone already believes they're real cousins. My Girl is a love story intertwined with comic situations.

"They improved a lot since Sana Maulit Muli," boasted direk Pobocan about the performance of Kim and Gerald. "The passion is there. Mas lalong nag-intensify 'yong passion. Because before [in Sana Maulit Muli], passion lang. That kept me going na i-train ‘yong dalawang bata. Now, bukod sa passion, may skill na although they have a lot to learn still pero meron nang dimension."

Between the two, it was Kim who showed marked improvement as an actress. Even her directors were surprised.

"This early they [Kim and Gerald] learned that in this business, it's not enough that you're popular. In this business, you need skill and you need to love it and I think ginagawa naman nila. Mahal nila ‘yong trabaho nila that's why pinaghuhusayan nila."

Kim had to learn Mandarin to justify her role as a tour guide for Chinese tourists.

Mixing veterans with young stars gives the show a perfect balance, particularly in some scenes that require experience and depth.

The cast will go on a nationwide tour of malls and various campuses.

Watch the premiere episode of My Girl, May 26 (Monday), on ABS-CBN's Primetime Bida.