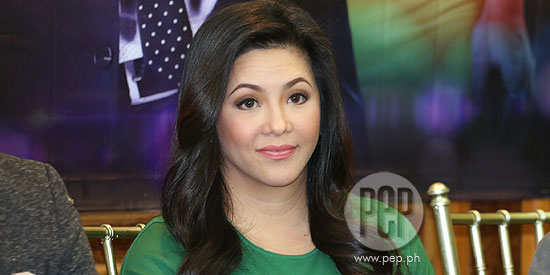 For the first time, Regine Velasquez will be sitting as a judge for GMA-7's popular artista reality search Starstruck.

In an interview during the show's press conference, Asia's Songbird admitted, “Hindi pa naman ako [nakapag-judge]. Kasi, normally, 'yong mga singing contest, I'm usually hosting it, but never a judge so, it's very exciting for me.”

Regine says she does not have any idea how she will be giving her comments to contestants.

Admittedly an inexperienced judge, Regine assures she will not a "terror" to StarStruck VI hopefuls.

“It's not naman in my personality to be mean,” she said.

“I think pwede naman akong mag-critique in such a way na they won't feel bad. I think I'd be able to do that naman.

Meanwhile, during the press con proper, a reporter suggested that judges should focus on looks rather than the talents of StarStruck contestants.

Does Regine agree with this?

“I think what he's trying to say is 'yong acting can be taught. Singing not so much. Kaya nga kung artista ka, artista ka. Kaya nga 'yong acting, naituturo 'yon, nate-train mo sila to be an actor.

Right now, Regine says she's excited to find out who among the contestants have the potential to be the next Kapuso artist.

“I'm also looking forward to see the kids, the hopefuls.

Aside from Regine, the other judges are Eat Bulaga! host Joey de Leon and StarStruck first female winner Jennylyn Mercado.