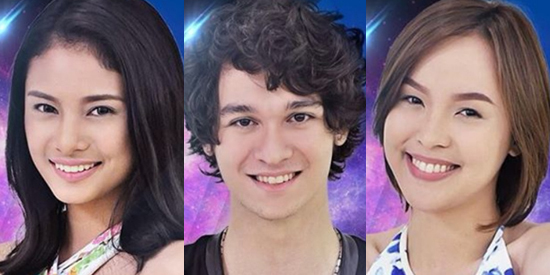 Three contestants were revealed to be part of the Final 14 of StarStruck VI. These were (L-R) Klea Pineda of Caloocan, Avery Paraiso of Antipolo, and Koreen Medina of Laguna.

GMA-7's reality-based artista search previously aired in 2010. Steven Silva and Sarah Lahbati emerged as the winners back then.

This 2015, 35 hopefuls were handpicked out of thousands who auditioned.

The September 7 pilot episode of StarStruck 6 had tears and laughter as some of the hopefuls were eliminated from the competition.

In the coming days, more contenders will be booted out until the Final 14 is complete.

They will have the chance to become this season’s ultimate survivors.

One finalist, Kevin Sagra, will know his fate during the first live broadcast on Friday, September 11.

WHAT TO EXPECT. Before the presentation of the first five contestants, the show aired testimonies from entertainment veterans and other StarStruck survivors.

“It’s good to know what the original has in store for us so many years after when so many star searches have spawned from the landscape.”

For Jennylyn, who also serves as a member of the StarStruck council, pointed out what kind of an ultimate survivor should be produced this season.

THE DOOR. One of the new twists added to StarStruck VI is the introduction of The Door.

Upon crossing The Door, the hopefuls will know whether or not they will be part of Final 14.

When a StarStruck touches a portal, s/he will hear one of three things:

1) “Congratulations” for those who made it to the next round

3) “Result will be announced on the live broadcast. Until then, good luck!”

The StarStruck VI contestants went through four stages of testing: the talent showcase, the workshop, the screen test, and the director’s night.

Three finalists are assured a slot in the artista search:

Klea of Caloocan, who showed her talent in singing.

Avery of Antipolo, who revealed that he auditioned not for money or fame but “I’m here because of me.”

The last finalist who made the cut was Koreen, who first joined Mutya ng Pilipinas before trying her shot in the reality star search competition.

Jefferlyn of Marikina and Alicia of Quezon City, on the other hand, had to give up their dreams for the meantime.

As for Kevin, he had to wait if he made it to the final cut after he received the surprise message that he will know the results on the first live broadcast.

At the end of the pilot episode, Faith Da Silva (daughter of actor Dennis Da Silva) was introduced.

Will she be able to join the Final 14? Find out in the upcoming episodes of StarStruck VI.